A genetic explanation of economic success

Editor’s Note: On Making Sen$e this week, we’ve been publishing Paul Solman’s never-aired conversation with economic historian Gregory Clark about his 2007 book, “A Farewell to Alms.” In Friday’s installment, we get to the really controversial part: that genetics may explain why some societies, specifically industrial England, grew economically.

But, first, a recap of the journey Clark has taken us on this week. In the beginning of human history, population was limited by the limited resources to keep humans alive (this is the “Malthusian” economic view developed by Thomas Malthus.) And so with more violence (not to mention fewer working hours), hunter-gatherer society, Clark argued in part one of this interview, was easier than life in pre-industrial England, where material life was harder. 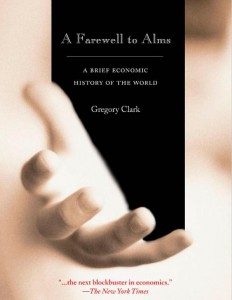 But that changed with the Industrial Revolution. Suddenly, the West got rich. One of the world’s intellectual puzzles has been, why and how did England break out of that Malthusian trap? In part two, Clark explained how human nature – indeed our very patience for gratification – changed as we moved from hunter-gatherer society to 1800.

England wasn’t the site of fast economic growth, as the economics literature has long preached, because of the existence of political and market institutions. No, Clark said in part three, England’s economic growth stemmed from the “survival of the richest;” those who personalities were best suited for capitalism thrived.

And now for the truly controversial part. Those traits, like being materially-driven and being able to wait for gratification (think of the marshmallow test), vary by class, and even if Clark believed (and hoped) that cultural transmission explains the class variance, he saw nothing to rule out a genetic explanation.

Paul Solman: The reason that the New York Times science section did this whole big story on you, even before this book came out, surely is because of the genetic part of this explanation, yes? Is that fair?

I think the data from somewhere like England, and this is just suggestive, and also the information about these fairly fundamental changes in features like people’s patience, or the amount of work that people do, at least raises the possibility that there was a further change in people, booting the Neolithic revolution and the onset of the Industrial Revolution.

Greg Clark: Right. They’re basically in 6,000 to 8,000 years, and if you look at this – what would make this possible? Well, as one of my colleagues in economics, Oded Galor, has pointed out — I think very rightly — it takes a very long time for something like evolution to produce something like a thumb from scratch — an incredibly long time. But if you have a society where there’s a variation in a trait and there is a variation because it’s neutral (it doesn’t make much difference toward people’s lives), then selection pressure can very quickly change the characteristics and can change the presence of that trait in the society.

And so, for example, in hunter-gatherer society, the present is what matters. There is no provision for the future. You hunt what you get each day. You move each day. There is no long-term planning in this society.

That’s a possibility that opened up with the arrival of settled cattlers out of agrarian societies. It’s quite plausible that hunter-gatherers, people in that era, varied enormously… Then it becomes quite easy for certain of those traits to get selected for in that population.

And we do know that in attempts of, say, selective breeding of foxes in Siberia, that in something like 70 generations, you can take foxes that are afraid of people and make some of them into foxes that are tame and domestic, and make other ones into ones that are super wild. And that’s within the compass of the time frame between the Neolithic Revolution and the onset of the Industrial Revolution.

How heritable is that trait? And again in England, we see that it’s a very strong predictor; what your success is going to be based on what the success of your father was. And there’s actually very strong heritability of that trait.

Given that, it is not possible to rule out that there really would be this change, but it will be very difficult in practice to tell this. Given that we have this trait in somewhere like modern England, and if we go to hunter-gatherer societies, and we can actually locate where it is in our genes that time-patience or these other traits are actually found, we should expect to see differences between society.

“There’s nothing that rules out this possibility that somehow the economically successful of the modern world are actually genetically different from the people who are not a member of the successful.”

Paul Solman: We only have about 20,000 genes we now think, so you’re not suggesting that there is one gene there for those traits?

Greg Clark: You’re moving me into an area that’s well beyond my competence. All I can say is that there’s nothing that rules that out, and that it could be a combination of genes, it could be a single gene, but that there’s nothing that rules out this possibility that somehow the economically successful of the modern world are actually genetically different from the people who are not a member of the successful.

Within our society, time-preference rates vary, and it varies by social class. Personally, I’m more inclined to think that this is mainly a kind of cultural transmission.

One of the things that gives this more plausibility is that there are actually other ways you can see the genetic imprints in the modern world of what conditions were like in pre-industrial societies. And so if you take, for example, lactose intolerance, there’s very low rates of lactose intolerance in pre-industrial Europe, and we think that those were societies where there was a lot of consumption of animal products, and consequently a lot of milk around long back into their history.

If you go to somewhere like Japan or China, those seem to be societies where for a very long period, people lived at a much lower level where animal protein is very scarce, and there’s very little milk in those societies. And sure enough, you find that there’s much higher rates of lactose intolerance.

And so if something like that can actually develop differently in these different societies based on the material conditions in the pre-industrial world, it’s certainly not impossible that other traits could actually be selected for in this period.

Paul Solman: Well, there’s a lot of discussion now about the fact that people misperceive the world in sort of systematic ways, misperceive risk, for example, due – at least the argument goes – to the fact that in our original evolutionary state or environment, those traits didn’t hurt us. Right?

Paul Solman: So are you not treading on very tricky ground here? One, it’s provocative enough that the Times will do a story, but two, there are going to be emailers galore saying, “Who is this guy? This is outrageous.”

Greg Clark: When I came to writing this book, I adopted deliberately a certain kind of philosophy, which was I decided that I wasn’t going to be afraid of potentially making mistakes; that if you try and censor yourself before you write history, if you try and fit into the conventional wisdom of economics, it’s not going to produce very interesting history. And so, whereas PBS viewers might be kind of shocked by the suggestion that people can genetically change, believe me, within the economics profession, the attack on institutions is regarded as just as wild.

“Whereas PBS viwers might be kind of shocked by the suggestion that people can genetically change, believe me, within the economics profession, the attack on institutions is regarded as just as wild.”

And so I think if you start censoring yourself before you see the data, then it’s very hard to do interesting and different things. And when I got into looking at this – I should say that I got into this, in part, because I was interested for a long time in the possibilities of evolutionary pressures. I read Jared Diamond’s, “Guns, Germs, and Steel,” where he argues look, there is the selected pressure, but it’s actually making New Guinea tribesmen much smarter than Europeans. Europeans are just the people whose gut bacteria allowed them to survive the appalling sanitary conditions generation after generation. And in fact, in pre-industrial Europe, the cities were the big consumers of people. People went to the cities and died.

So my thought was that what was going to happen in pre-industrial Europe is that all the smart people will continually leave the countryside; the energetic, the innovative will go to the cities and then die, and we are the remnants of rural idiocy, of the people who stayed longest in the countryside.

On the other hand, Oded Galor, a theorist, and Omar Morov had theorized that you could have this other type of selection that would result in people who had more investment in children actually surviving.

The data just didn’t speak that way. The data spoke in this other, very different way, and going into this, my thought was you’ve got to go with what the data say here, wherever this may lead.

Left: There's nothing to rule out a genetic explanation for the success of certain societies, economic historian Gregory Clark told Paul Solman in 2007. Photo by Flickr user kimitobo.