CHICAGO (AP) — Abortion rights protesters rallied in cities around the United States on Saturday, vowing to fight to ensure that abortion remains a legal option for women nationwide.

Hundreds gathered in Chicago, Atlanta, Houston and other cities days after a draft U.S. Supreme Court opinion was leaked to the public suggesting the court is poised to overturn the landmark 1973 Roe v. Wade case that legalized abortion nationwide. The draft opinion, which comes amid nearly 50 years of federal abortion protections, could change before the ruling is finalized in coming weeks.

“To think that, after all this time, people still want to control what women can do and our rights to make our personal healthcare decisions is just really outrageous,” Carole Levin, chair of Courts Matter Illinois, told WMAQ-TV during the rally in Chicago. 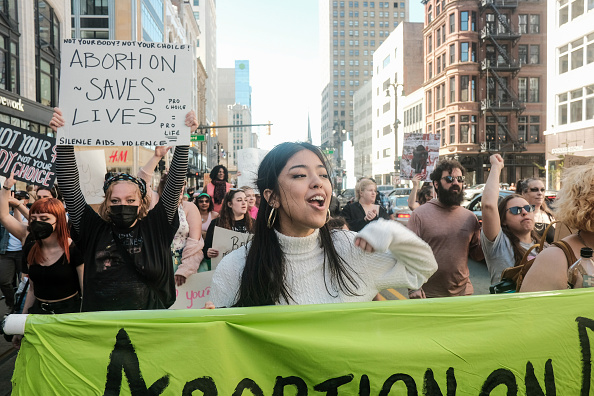 “I’m proud Illinois is an island for reproductive freedom in the Midwest,” he said. “Our shores remain open for any person left marooned by these extremist politicians.”

In the nation’s capital, abortion rights protesters stood outside the Supreme Court, holding signs that said abortion is a human right, or “Abort the Court.” Protesters who oppose abortion demonstrated across the street.

In Atlanta, demonstrators carried signs in favor of abortion rights as they marched through that city’s downtown and chanted, “Not the church and not the state, women must decide our fate.”

In Houston, thousands attended a reproductive rights rally headlined by Democrat Beto O’Rourke, who is running for Texas governor. Texas is one of several states that would automatically ban abortion, leaving no exceptions for rape or incest, if the high court overturns the nationwide right to abortion.

An investigation is underway to determine who leaked the Supreme Court draft opinion to Politico.

Left: Abortion-rights demonstrators march through downtown on May 07, 2022 in Chicago, Illinois. Demonstrations across the country continue as abortion-rights and anti-abortion advocates react to the leaked initial draft majority opinion indicating the U.S. Supreme Court would overturn two abortion-related cases, which would end federal protection of abortion rights. Photo by Scott Olson/Getty Images