California wants to be a sanctuary for abortion rights. But in the Central Valley, care is harder to reach

VISALIA, Calif. – A decade ago, Karina Gallardo-Montoya did not see the same support for reproductive health care access in Tulare County that she sees today.

Sexual and reproductive health is a growing interest among many in the San Joaquin Valley, even if access to it still lags behind other parts of the state, Gallardo-Montoya said.

The financial cost of accessing general medical care, she said, made her think twice in the past about seeing a doctor. When appointments were made for several weeks out, she opted for urgent care visits. Other times, she traveled far distances to nearby cities just to be seen.

Those are challenges that many in this part of central California face. It’s estimated there is one physician for every 2,300 residents in Tulare County, according to the University of Wisconsin at Madison’s Population Health Institute. A 2018 report from the California Health Care Foundation also found there is an uneven distribution of primary and specialty care physicians in California.

In the entire San Joaquin Valley, there are 40 percent fewer primary care physicians per capita than in the Bay Area, for example. The foundation describes the Bay Area as “healthier, wealthier and has higher rates of insurance, on average, than the rest of California.”

Most recently, Gallardo-Montoya has been one of the few reproductive health advocates conducting outreach throughout Tulare County, educating people about the services offered by Planned Parenthood Mar Monte, where she works as an organizer. She’s talked to hundreds of students at the College of the Sequoias in Visalia, where she said people from nearby cities like Hanford, Porterville and Tulare attend, and approach her to say they haven’t had much information around sexual education.

On her visits, she brings along a basket of condoms. Some students ask if they can take more than one, Gallardo-Montoya said.

The county is considered “medically underserved” by the federal government and has historically seen teen pregnancies and sexually transmitted infections be a challenge. The county’s various groups – migrant workers, immigrants, Latinos, LGBTQ people – also face serious barriers to care, according to the Kaiser Family Foundation, a group that tracks health statistics.

In Gallardo-Montoya’s view, student interest in reproductive care is becoming more common in Tulare County the longer she works in the field. But she knows that outside of the college campus, the embrace of that education isn’t equally received by some when topics like abortion come up. Planned Parenthood has routinely drawn criticism from religious and anti-abortion groups who are critical of those who seek or offer abortions.

If the U.S. Supreme Court’s recently leaked opinion to overturn Roe v. Wade, the landmark case that granted the right to abortion across the country, is approved in a final decision by the justices, it would mean states would set their own laws on abortion; many already have laws that will make abortion illegal. 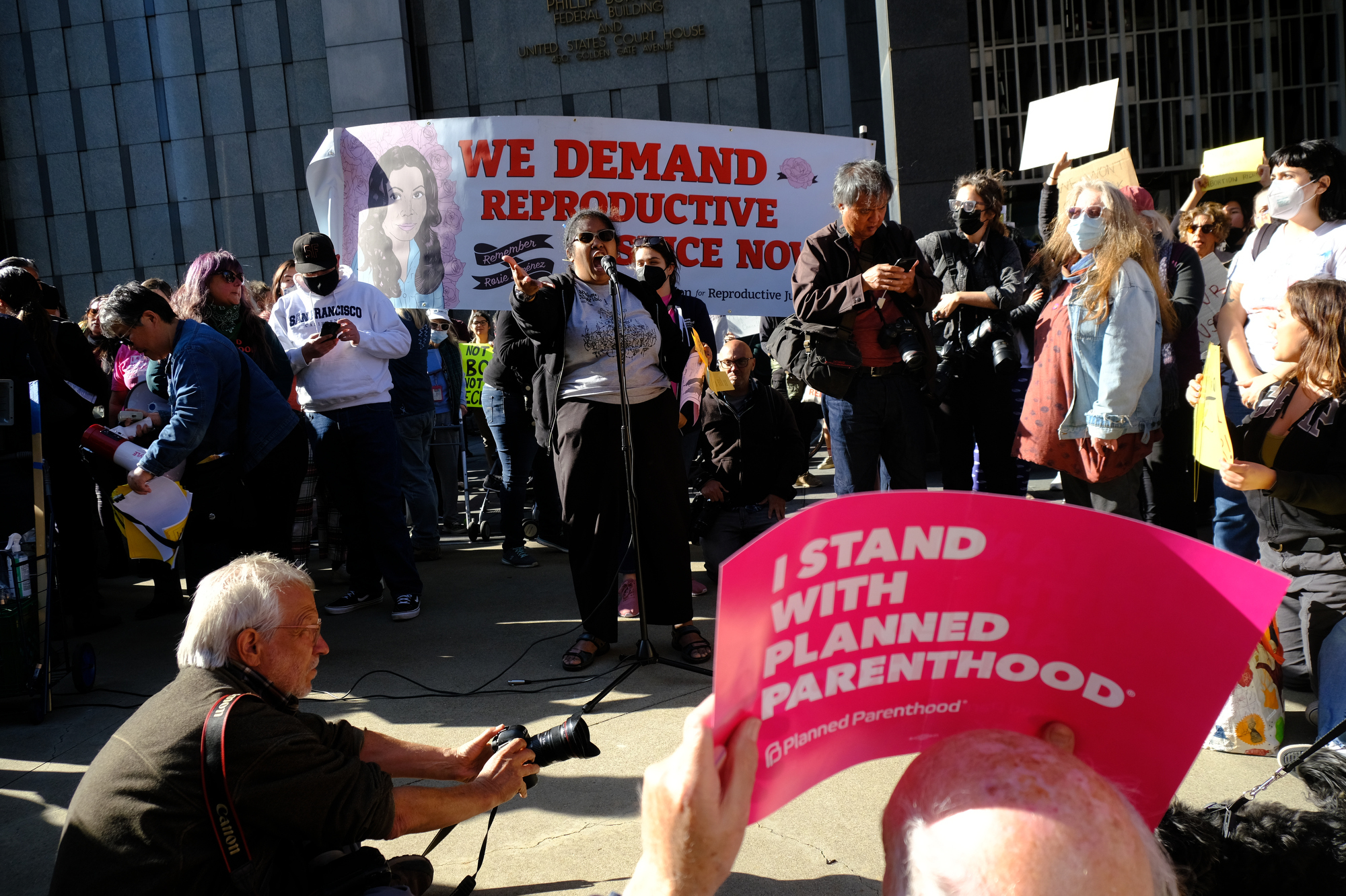 Kristina Lee of the National Mobilization for Reproductive Justice San Francisco speaks during a May 3, 2022, protest in San Francisco, following the leaked draft of a Supreme Court majority opinion that would overturn Roe v. Wade. Photo by Marlena Sloss for The Washington Post via Getty Images

But in California, overturning Roe v. Wade is highly unpopular, and it would likely mean more people would flock to the state seeking the service.  A vast majority – 73 percent – of residents in the Central Valley oppose getting rid of the federal right to abortion, according to the Public Policy Institute of California. Opposition is also higher in the Bay Area.

Gov. Gavin Newsom has referred to the state as a sanctuary for those seeking abortion care and, following the news of the leak, announced the state would immediately move to amend the constitution to include abortion as a fundamental right. Legislators would have until the end of June to vote on an amendment, which voters will then vote on in November.

Speaking at a news conference the morning after the news, California Senate President Pro Tempore Toni Atkins said if the Supreme Court “won’t protect our bodily autonomy, California will make sure our constitution leaves no room for confusion.”

Nationally, abortions saw an overall, steady decline between 2010 and 2019, according to federal statistics. Sixteen states and the District of Columbia have laws in place to protect the right to an abortion beyond Roe v. Wade, and 12 of those laws, including California’s, allow an abortion whenever necessary to protect the health of the patient.

The local fight on abortion endures

But even in a state heavily in favor of the right to choose abortion, access to it isn’t always easy– or well-received – in some places. Some experts say views on the issue of abortion are polarizing at the local level due to partisanship.

In March, dozens of people rushed to the Visalia City Council to weigh in on plans to expand the Planned Parenthood Mar Monte office in downtown Visalia into a much larger facility in the city’s main commercial corridor.

Some speakers, citing religious texts and reasons they’re against abortions, stood firmly against Planned Parenthood and its abortion practices; they told the city council they did not want abortions to be conducted in the city.

But at the small Mar Monte clinic in downtown Visalia, abortion is not an option at all. Instead patients are referred an hour each way to a Planned Parenthood clinic in Fresno or Bakersfield to undergo the procedure.

The expanded medical facility in Visalia could have provided abortion access locally, in addition to testing for STIs, cancer screenings, general health checkups and providing support for domestic violence survivors.

The council placed the expansion plans in “indefinite continuance,” essentially removing it from council agendas, following the public outcry. The city’s planning commission had earlier unanimously approved the use of the new building as a medical facility.

Lauren Babb, a spokesperson for Planned Parenthood Mar Monte, said she suspects the Visalia expansion plans didn’t happen simply because the organization is named “Planned Parenthood” and added that stigma about the clinic and its work has left her “frightened.”

But she said the agency will continue to seek a larger Visalia location and, for now, will continue to operate their small office, which is open three days a week with limited hours. She added that for a lot of residents in this region, where they must travel far to get abortion care and support among elected officials isn’t guaranteed, it’s as if Roe v. Wade was already overturned.

“It’s hard to not feel like there’s a target on our work in the Central Valley at times,” Babb said. “[People] didn’t understand that we had already been there for seven years. So it’s this notion of sort of putting us in a back alley somewhere, and that’s where they want us to stay.”

“It just goes to show that the need is there, and people know how to find us when they can, and we’ve got to do a better job of meeting them where they’re at.”

Plans to expand now carry more meaning in light of abortion rights laws possibly being rolled back, something Babb said she was expecting for some time. She said Planned Parenthood Mar Monte has been aiming to expand its services, in addition to training more health clinicians in order to accommodate a possible influx of people who may seek services from other states.

Around 200,000 people visit a Planned Parenthood Mar Monte office a year, and around 40,000 of those were visits within the San Joaquin and Sacramento valleys, according to Babb. Other offices are located in the Bay Area and Central Coast. She said she expects clinic visits to substantially increase if the decision stays the same.

“I’m 29, and I’ve never lost a constitutional right. And that is not lost on me,” Babb said. “I think that’s the real scary thing for me. What’s next? Are they coming for interracial marriages, are they coming for the LGBTQ community?”

Babb also hopes there are enough resources so existing Planned Parenthood patients like those in the San Joaquin Valley, where transportation and local anti-abortion beliefs can shape the accessibility of the service, are not left out.

She said during a visit to Visalia from her Sacramento office, a homeless woman from Tulare, a city 20 minutes south of Visalia, showed up to the council meeting to support the expansion of the Planned Parenthood Mar Monte clinic. Babb said the woman, who is four months’ pregnant, told Babb she didn’t have prenatal care and feared her child would be taken away at birth because she won’t be able to care for it.

“It just goes to show that the need is there, and people know how to find us when they can, and we’ve got to do a better job of meeting them where they’re at,” Babb said.

In addition to pushing for an amendment to the state constitution, California Gov. Newsom has previously made it easier to gain access to abortion care, said Alex Stack, a spokesperson from the governor’s office.

Accessing health care is also tedious for those in poverty. In Tulare County, a region of just over 470,000 residents on one side of sprawling agricultural land and mountain ranges on the other, it came as no surprise to some when the region, where 17 percent of the population lives in poverty, was among the most severely impacted early on in the pandemic.

Gallardo-Montoya, who works as a Planned Parenthood organizer, said the possible decision to overturn Roe v. Wade has left her wondering how it might impact those who still find it hard to seek health care.

She said Planned Parenthood Mar Monte has been where she felt most comfortable seeking care because clinicians have been more open to understanding diverse patient health needs.

She said the young people she speaks with tell her there is an interest for services like abortion and reproductive health care access, despite opposition in the region.

Left: Supporters and those opposed to expanding a Planned Parenthood clinic in Visalia, California, fill a lobby at Visalia City Hall on March 7, 2022. Efforts to expand the clinic, which would have provided abortion access, were met with public outcry, and city officials decided not to take up the matter. Photo courtesy of Planned Parenthood Mar Monte