CHICAGO — An angry crowd shouted and threw bottles at Chicago police after an officer fatally shot a man on the city’s South Side Saturday, prompting the arrest of at least four demonstrators.

Chicago police patrol chief Fred Waller told a news conference that the man was shot in the South Shore neighborhood after police officers on foot tried to question him because “the bulge around his waistband” suggested he was armed. The man became combative and eventually broke free from the officers, Waller said.

“They thought he appeared to be reaching for a weapon, which he did have a weapon on him, and the officers tragically shot him,” he said.

The unidentified man was taken to a local hospital and pronounced dead. Waller said police believe the man did not have a concealed carry permit for the semi-automatic weapon. He also had magazines of ammunition, Waller said. 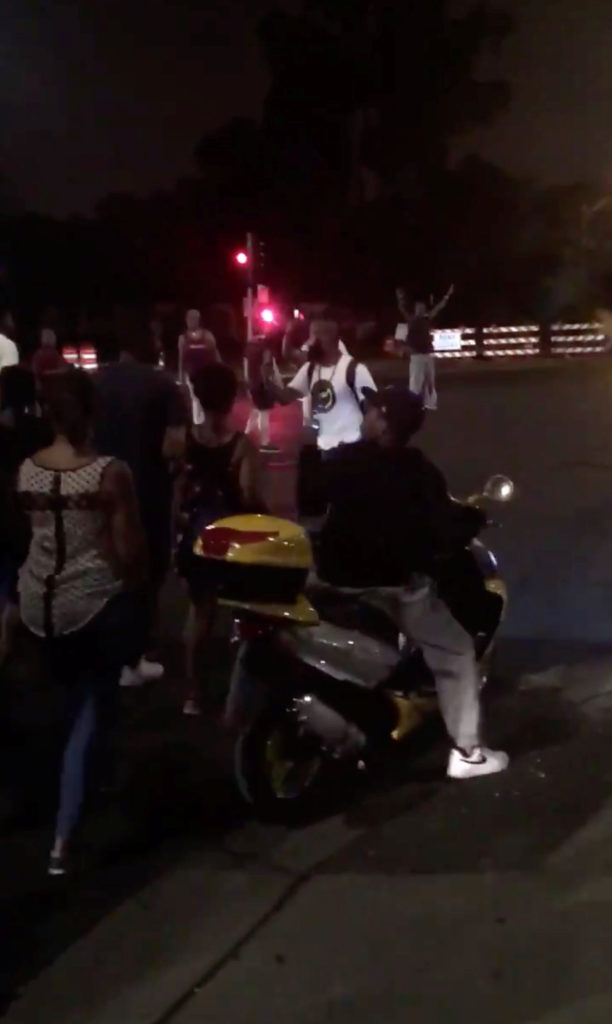 Protesters march after a man was shot by police in Chicago, Illinois, on July 14, 2018 in this still image taken from a video obtained from social media on July 15, 2018. Photo by Legal Help Firm via Reuters

Immediately after the shooting, an angry crowd gathered and began jostling with police, who had cordoned off the area. Waller said protesters threw bottles and jumped on top of a squad car. Police then moved in wielding batons to stop them.

“It got a little bit out of hand. Several arrests were made,” Waller said.

Several police officers were slightly injured in the scuffles, Waller said, and some squad cars were damaged.

READ NEXT: When black death goes viral, it can trigger PTSD-like trauma

After nightfall, protesters continued to mill around the neighborhood with police occasionally chasing them away. Video showed one protester thrown to the ground surrounded by police holding batons.

Chicago has a troubled history of police shootings. The city erupted in protest in 2015 after the release of a video showing white police officer Jason Van Dyke shooting black 17-year-old Laquan McDonald 16 times in 2014. Van Dyke was charged with murder. McDonald’s death led to the ouster of the police chief and a series of reforms designed to prevent future police abuses and to hold officers accountable.

Left: Protesters march after a man was shot by police in Chicago, Illinois, U.S., July 14, 2018 in this still image taken from a video obtained from social media on July 15, 2018. Photo by Legal Help Firm via Reuters