WASHINGTON — Diagnostic testing for the coronavirus is bound to go down in history books as one of the most consequential failures of the U.S. response to the pandemic. Seemingly blindered on the subject, President Donald Trump persists in bragging about it.

For weeks, the daily White House briefings were a platform where Trump spread misinformation, sometimes corrected by the public health officials with him or at least put in a more scientific context by them. Those briefings have ended, at least for now. But Trump still has his say on what’s going on and familiar falsehoods are still being heard, including on veterans’ health care, as well as new ones.
To review: 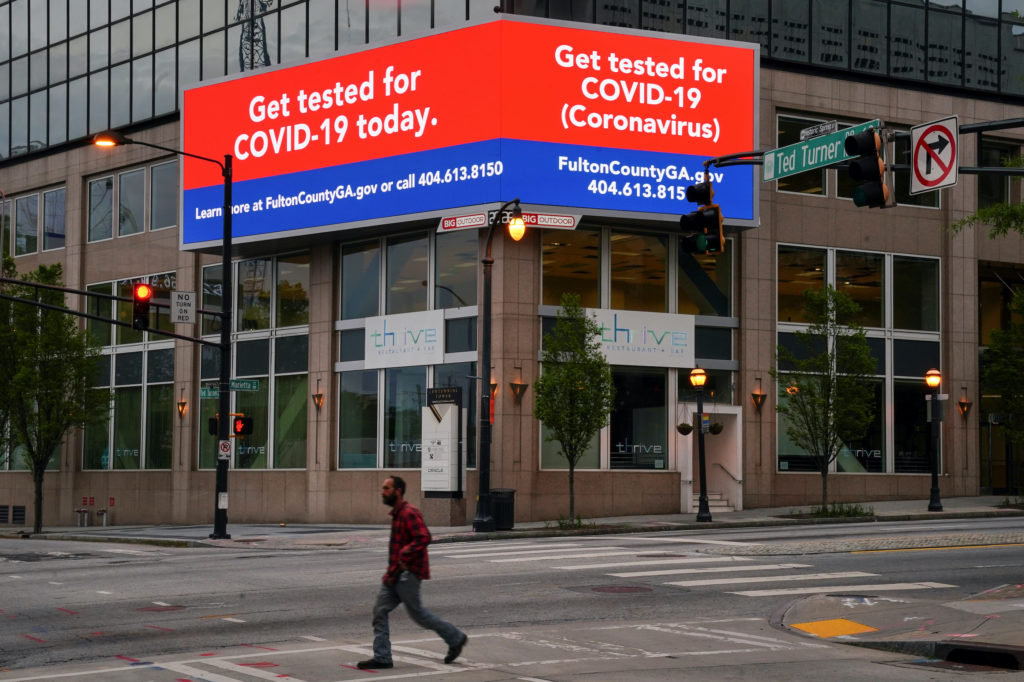 A man walks in front of a sign encouraging the public to get tested for COVID-19, days before the phased reopening of businesses and restaurants from coronavirus disease (COVID-19) restrictions in Atlanta, Georgia, U.S. April 22, 2020. REUTERS/Elijah Nouvelage

TESTING
TRUMP, responding to a Harvard University study that 5 million tests would be needed to safely reopen the country: “It will increase, and it’ll increase by much more than that in the very near future. We’re way ahead of everyone on testing. … We’re going to be there very soon. If you look at the numbers, it could be that we’re getting very close.” — remarks Tuesday on aid for small businesses.
THE FACTS: Actually, Trump is nowhere close in his prediction of providing 5 million tests a day, according to his own federal “testing czar.”

Giroir told Time those numbers couldn’t be supported by current technology. The U.S. recently tested as many as 300,000 a day, and Giroir said he plans to hit 8 million per month by next month.
Asked again about it the following day, Trump backtracked, saying the U.S. could hit 5 million tests perhaps eventually. He said “we are going to be there at a certain point.”
___

TRUMP: “I’ve told you that we inherited a very broken test — a broken system and a broken test.” — remarks Tuesday.

THE FACTS: He’s repeating a false assertion that he inherited a “broken” COVID-19 test from the Obama administration. The novel coronavirus did not exist until late last year, so there was no test to inherit.

The Centers for Disease Control and Prevention instead struggled to develop its own test for the coronavirus in January, later discovering problems in its kits sent to state and county public health labs in early February.

It took the CDC more than two weeks to come up with a fix to the test kits, leading to delays in diagnoses through February, a critical month when the virus took root in the U.S. Not until Feb. 29 did the Food and Drug Administration decide to allow labs to develop and use their own coronavirus diagnostic tests before the agency reviews them, speeding up the supply. Previously, the FDA had only authorized use of a government test developed by the CDC.

Meantime the U.S. bypassed a test that the World Health Organization quickly made available internationally. Trump has said that test was flawed; it wasn’t. The U.S. has strikingly lagged a variety of countries in its ability to test people widely and quickly, despite increasing its capacity after a first chapter that public health officials acknowledged was a failure.

More than 6 million people have been tested in the U.S. More than 1 million have been sickened by the virus and more than 60,000 have died. The U.S. has experienced roughly 1 in 4 reported deaths from the virus worldwide.
___ 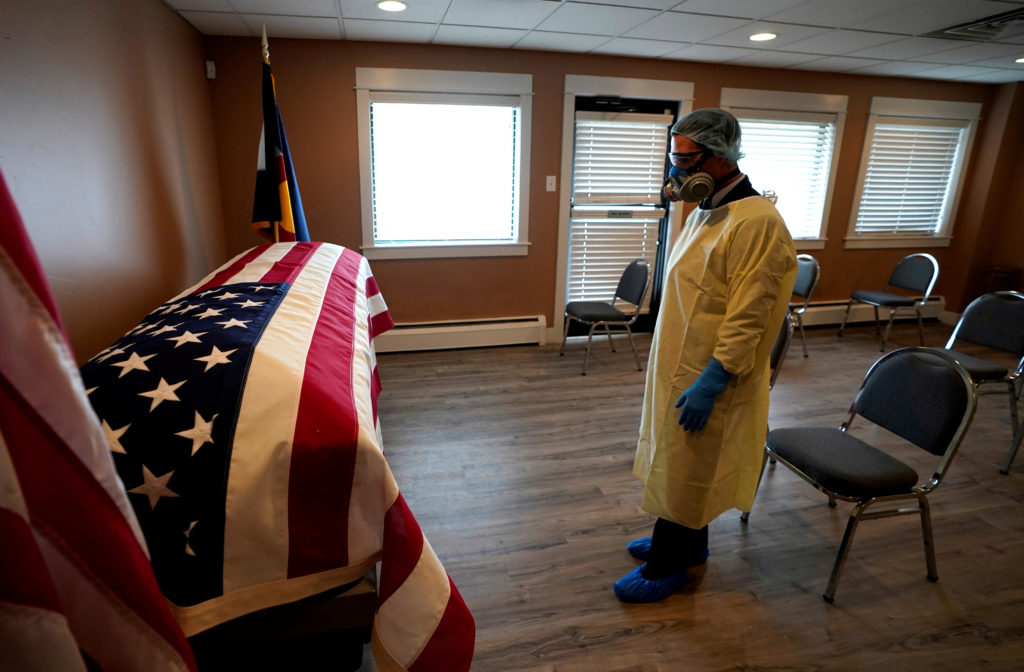 Michael Neel, funeral director of of All Veterans Funeral and Cremation, wearing full PPE, looks at the U.S. flag on the casket of George Trefren, a 90 year old Korean War veteran who died of the coronavirus disease (COVID-19) in a nursing home, in Denver, Colorado, U.S. April 23, 2020. Photo by Rick Wilking/Reuters.

VETERANS
TRUMP, on the administration’s health care efforts during the coronavirus outbreak: “We also acted swiftly to secure our veterans’ health care facilities. … And we’re being helped very greatly by the passage of all the things that we got passed, Robert, especially Choice, so that people can go and see their doctor when they have to.” —remarks Thursday, with Veterans Affairs Secretary Robert Wilkie in attendance.

THE FACTS: Trump is way off the mark on two fronts. He didn’t pass the Veterans Choice program, and that program has had little impact during the virus outbreak. In fact, since March, the VA suspended the program’s key provisions that granted veterans the option to see private doctors if they endured long waits for care at the government-run VA.

Congress first approved the program in 2014, and President Barack Obama signed it into law. Trump expanded it.

The program allows vets to see a private doctor for primary or mental health care if their VA wait is 20 days (28 for specialty care) or their drive is only 30 minutes or more.

But since the program’s expansion in June 2018, the VA has not seen a major increase in veterans seeking care outside the VA, partly because wait times in the private sector are typically longer than at the VA.

Under the temporary restrictions, the VA is reviewing referrals for nonemergency care “on a case-by-case basis for immediate clinical need and with regard to the safety of the veteran when being seen in-person, regardless of wait time or drive time eligibility,” said VA spokeswoman Christina Noel.

Republican lawmakers and conservatives such as Fox News host Pete Hegseth, a close ally of Trump’s who was considered for the VA secretary job in 2018, have argued that Trump’s signature program has been rendered ineffective during the coronavirus outbreak — not shined as a model of care.

“This is a time when the VA should do everything possible to expand health care choices for veterans, not arbitrarily restrict them,” said Nate Anderson, executive director of the conservative Concerned Veterans for America.
In 2019, 35% of all VA appointments were with outside physicians, slightly lower than the 36% in 2017.
___ 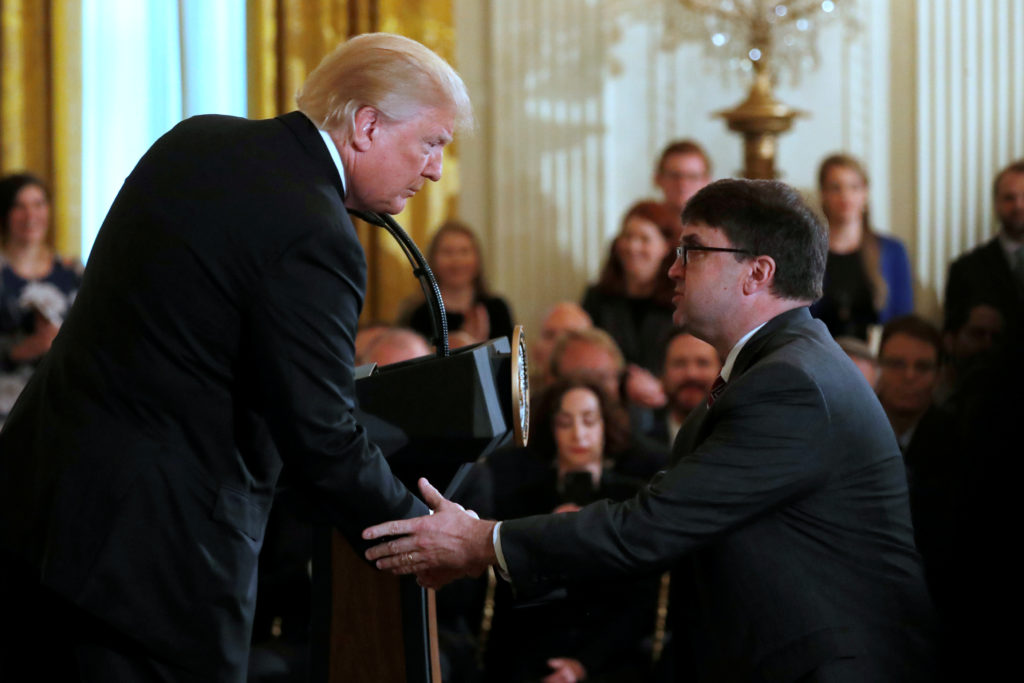 U.S. President Donald Trump shakes hands with Veterans Affairs acting Secretary Robert Wilkie after informing him that he will be nominating him to be the new Secretary of the VA, during the Prison Reform Summit at the White House in Washington, U.S., May 18, 2018. Photo by Jonathan Ernst/ Reuters

WILKIE, when asked how many VA employees have been tested for the coronavirus: “Well, we’ve tested well over 60,000.” — MSNBC interview on April 22.
THE FACTS: He overstated it by double. The VA actually has tested 32,155 out of 390,000 total employees, according to department figures provided Friday to Congress.

Wilkie was responding to concerns about shortages of personal protective equipment at VA medical centers, such as masks and gloves. He argued that VA staff is doing fine because of low infection rates, but VA nurses who spoke last month to The Associated Press said it’s been difficult to get a test from the department to know if they have the virus.
According to the VA, employees who have been exposed to patients with COVID-19 and show symptoms may be tested “at a VA medical center, local health departments, or community resources, depending on what resources for testing are available.” The department said Friday that all employees at its nursing homes had now been tested, and it would expand testing to other “vulnerable” employees next week.
To date, about 2,000 staff at VA facilities have tested positive for COVID-19, and an additional 3,500 have been quarantined and are unable to work out of concerns they are infected, according to agency documents. About 20 staff have died.
The VA has pointed in part to the Federal Emergency Management Agency for not supplying it with enough medical supplies. More than a dozen Democrats led by Sen. Jon Tester, the top Democrat on the Senate Veterans’ Affairs Committee, have called on Trump to invoke the Defense Production Act to ensure that VA employees get an adequate supply of protective equipment.
___ 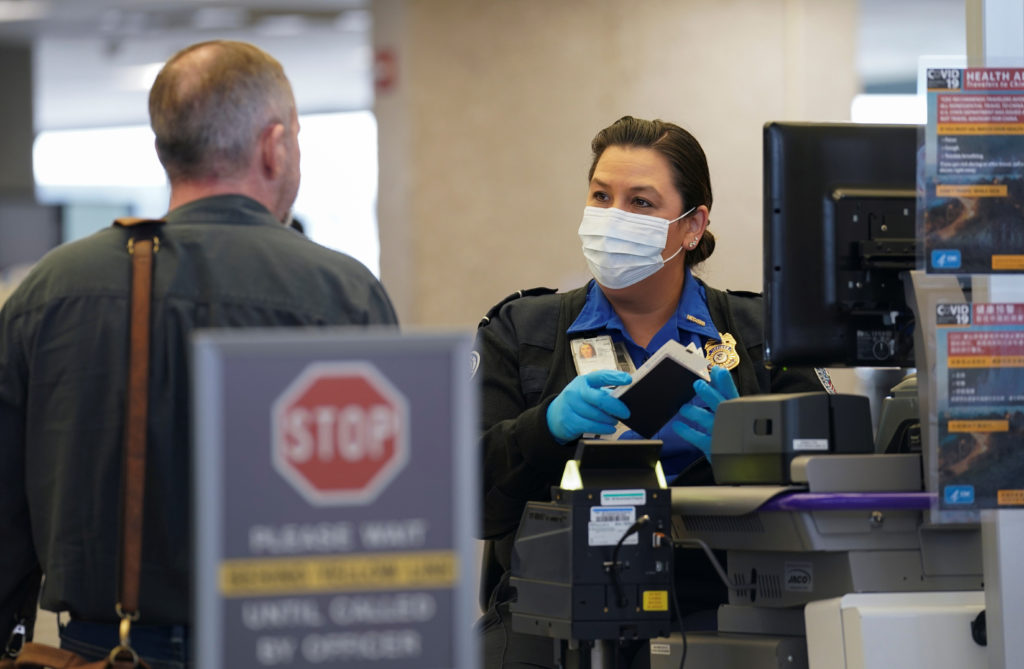 A TSA officer wearing a face mask clears a departing passenger at Dulles International Airport, a day after U.S. President Donald Trump announced travel restrictions on flights from Europe to the United States for 30 days to try to contain the spread of the coronavirus, in Dulles, Virginia, U.S., March 12, 2020. REUTERS/Kevin Lamarque

TRAVEL RESTRICTIONS
TRUMP: “I did something that the experts thought I shouldn’t have done: I closed down our country and our borders. I did a ban on China.” — remarks Tuesday.
THE FACTS: This is one of Trump’s most frequent exaggerations. Trump didn’t “ban” all the people infected with coronavirus from entering the U.S. from China. There were in fact many gaps in containment and initial delays in testing, leading to the U.S. rising to No. 1 globally in the number of people infected by COVID-19. It hit the 1 million mark in infections this past week.

Nor did Trump decide on his own or against the advice of experts to impose travel restrictions on China. He followed a consensus recommendation by his public health advisers.

His order in late January temporarily barred entry by foreign nationals who had traveled in China within the previous 14 days, with exceptions for the immediate family of U.S. citizens and permanent residents as well as American citizens.
___
TRUMP: “How do you keep American citizens — you say they’re coming in from China, they want to come back to their country. There is a tremendous problem in China; they want to come back. Are we supposed to say to an American citizen, ‘You can’t come back into your country’? And we did do testing.” — remarks Tuesday with Florida’s governor.

THE FACTS: He’s incorrect that Americans returning from China were tested for the coronavirus as part of Trump’s travel restrictions imposed in late January.

Americans returning from China were allowed back after enhanced screening at select ports of entry, which could include a temperature check and observations for symptoms.

That’s not the same as getting a test, which was in short supply in February due to problems with the CDC diagnostic kits. U.S. scientists say screenings can miss people who don’t yet show symptoms of COVID-19. While symptoms often appear within five or six days of exposure, the incubation period is 14 days.

Left: U.S. President Donald Trump speaks about the coronavirus response during a meeting with New Jersey Governor Phil Murphy in the Oval Office at the White House in Washington, U.S., April 30, 2020. REUTERS/Carlos Barria