AP fact check: Trump and a tale of 2 sheets of paper

WASHINGTON — President Donald Trump held up and read from a sheet of paper in the Rose Garden this past week as he argued he’s been hounded by investigators in the Russia probe for no reason. “Nearly 500 search warrants,” says the page, from an ABC News graphic. “More than 2,500 subpoenas.” And: “19 special counsel lawyers & 40 FBI agents worked the case.”

If that sounds like overkill by the Robert Mueller inquiry, it’s only half the story.

Trump did not show or quote from a second page that goes with the graphic, laying out the results of the investigation. Among them: “37 total indicted … 26 Russians indicted … 4 people sent to prison … 7 guilty pleas.” In Trump’s telling, it’s all a hoax.

Selective accounting like that has been a constant in Trump’s rhetoric.

A look at some of his recent statements, on the Russia investigation, the border, the economy and more:

THE FACTS: Federal prosecutors may not agree with that assertion, which he made in response to House Speaker Nancy Pelosi’s accusation that the president was engaged in a cover-up. Trump spoke after breaking off an infrastructure meeting when Pelosi and Sen. Chuck Schumer, D-N.Y., came to the White House for it.

In particular, the Justice Department says the hush money payments were unreported campaign contributions meant to influence the outcome of the election. That assertion makes the payments subject to campaign finance laws, which restrict how much people can donate to a campaign and bar corporations from making direct contributions.

Trump has said the payments were “a simple private transaction,” not a campaign contribution.

Separately, the Mueller report found that Trump dictated his son Trump Jr.’s misleading statement about a June 2016 meeting at Trump Tower to cloak its purpose.

Cohen, who pleaded guilty last year to campaign finance crimes in connection with those payments, had previously implicated Trump. The department’s filings backed up Cohen’s claims.

The Mueller report said Trump learned in summer of 2017 that the news media planned to report on the meeting at Trump Tower between senior campaign officials and Russians offering derogatory information about Hillary Clinton, the Democratic presidential nominee.

Trump directed aides not to disclose the emails setting up the meeting. Before the emails became public, the president also edited a press statement for Donald Trump Jr. by deleting a line that acknowledged that the meeting was “with an individual who (Trump Jr.) was told might have information helpful to the campaign” and instead said only that the meeting was about adoptions.

That episode was among 10 identified by the Mueller investigation of possible obstruction of justice by Trump. Mueller said in his report that he could not conclusively determine that Trump had committed a crime or that he hadn’t.

THE FACTS: Trump is wrong to suggest, as he has done before, that the FBI acted illegally by investigating him. The FBI does not need to know if or have evidence that a crime occurred before the bureau begins an investigation.

Many investigations that are properly conducted ultimately don’t find evidence of any crime. The FBI is empowered to open an investigation if there’s information it has received or uncovered that leads the bureau to think it might encounter a crime. Apart from that, the investigation into the Trump campaign was initially a counterintelligence investigation rather than a strictly criminal one, as agents sought to understand whether and why Russia was meddling in the 2016 election.

THE FACTS: A two-year investigation that produced guilty pleas, convictions and criminal charges against Russian intelligence officers and others with ties to the Kremlin, as well as Trump associates, is not a hoax.

Mueller charged 34 people, including the president’s former campaign chairman, Paul Manafort, his first national security adviser, Michael Flynn, and three Russian companies. Twenty-five Russians were indicted on charges related to election interference, accused either of hacking Democratic email accounts during the campaign or of orchestrating a social media campaign that spread disinformation on the internet.

Five Trump aides pleaded guilty and agreed to cooperate with Mueller, and a sixth, longtime confidant Roger Stone, is awaiting trial on charges he lied to Congress and engaged in witness tampering.

Mueller’s report concluded that Russian interference in the 2016 presidential election was “sweeping and systematic.” Ultimately, Mueller did not find a criminal conspiracy between Russia and the Trump campaign. But the special counsel didn’t render judgment on whether Trump obstructed justice, saying his investigators found evidence on both sides.

THE FACTS: It’s true that Pennsylvania-born Biden left the state without taking care of jobs for the people he left behind. He was a boy, 10 or 11, when his family moved to Delaware in 1953.

THE FACTS: This is not true. The tariffs he’s raised on imports from China are primarily if not entirely a tax on U.S. consumers and businesses, not a source of significant revenue coming into the country. 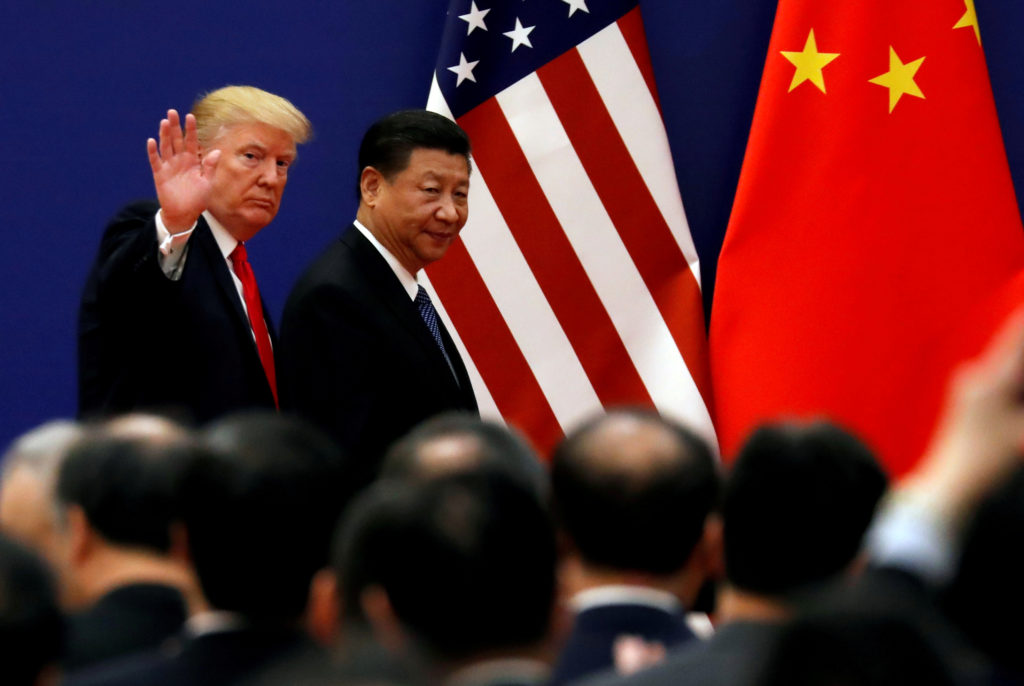 A study in March by economists from the Federal Reserve Bank of New York, Columbia University and Princeton University, before the latest escalation, found that the public and U.S. companies were paying $3 billion a month in higher taxes from the trade dispute with China, suffering $1.4 billion a month in lost efficiency and absorbing the entire impact.

It’s also false that the U.S. never collected a dime in tariffs before he took action. Tariffs on goods from China are not remotely new. They are simply higher in some cases than they were before. Tariffs go back to the beginning of the U.S. and were once a leading source of revenue for the government. Not in modern times. They equate to less than 1% of federal spending.

THE FACTS: Trump’s declaration that the U.S. is too “full” to accept migrants due to an overwhelmed southern border is his latest flip-flop. It turns out the U.S. is only “full” in terms of the people Trump doesn’t want. 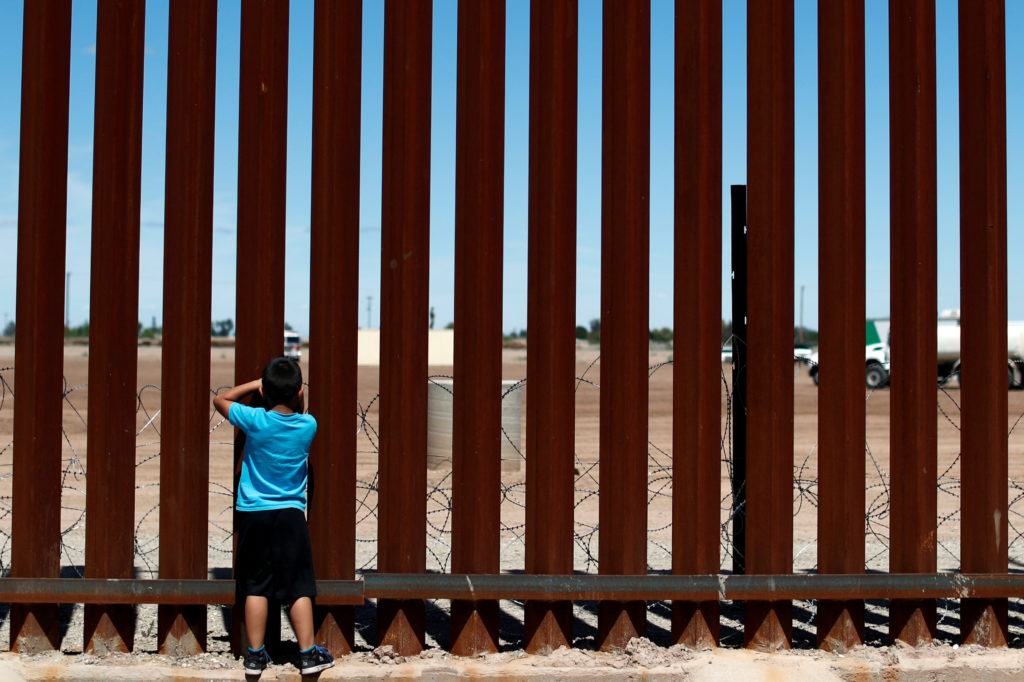 Just last month, the president had made clear that more migrants are needed due to an improving economy.

“We have companies pouring in. The problem is we need workers,” he told Fox Business Network on April 28.

“We need people to come in,” Trump said at a Wisconsin rally on April 27.

Immigrants as a whole make up a greater percentage of the total U.S. population than they did back in 1970, having grown from less than 5 percent of the population to more than 13 percent now. In 2030, it’s projected that immigrants will become the primary driver for U.S. population growth, overtaking U.S. births.

TRUMP: “The wall is being built as we speak. We’ll have almost 500 miles of wall by the end of next year.” — Pennsylvania rally Monday.

THE FACTS: It’s unclear how Trump arrives at 500 miles (800 km), but he would have to prevail in legal challenges to his declaration of a national emergency or get Congress to cough up more money to get anywhere close. Those are big assumptions.

So far, the administration has awarded contracts for 244 miles (390 km) of wall construction, but more than half comes from Defense Department money available under Trump’s Feb. 15 emergency declaration. On Friday, a federal judge in California blocked Trump from building key sections of the wall with that money; a separate challenge is before a judge in New York.

Nearly all of what Trump has awarded so far is for replacement barriers and fencing, not new miles of wall. Even if Trump prevails in court, all but 14 miles (22 km) of those awarded contracts replace existing barriers.

The White House says it has identified up to $8.1 billion in potential money under the national emergency, mostly from the Defense Department.

Customs and Border Protection officials say the administration wants Congress to finance 206 miles (330 km) next year. The chances of the Democratic-controlled House backing that are between slim and none.

TRUMP: “My Administration is achieving things that have never been done before, including unleashing perhaps the Greatest Economy in our Country’s history.” — tweet Wednesday.

TRUMP: “Most successful economy, perhaps, in our country’s history.” — remarks to reporters Wednesday.

THE FACTS: The economy is solid but it’s not one of the best in our country’s history, no matter how many times he asserts it. Trump is also claiming full credit for an economic expansion that began under President Barack Obama in mid-2009.

In the late 1990s, growth topped 4 percent for four straight years, a level it has not yet reached on an annual basis under Trump. Growth even reached 7.2 percent in 1984.

While the economy has shown strength, it grew 2.9% in 2018 – the same pace it reached in 2015 — and simply hasn’t hit historically high growth rates.

THE FACTS: The 3.6% unemployment rate in the latest report is not the best in history. It’s the lowest since 1969, when it was 3.5%. The U.S. also had lower rates than now in the early 1950s. And during three years of World War II, the annual rate was under 2%.

TRUMP: “Drug prices are coming down, first time in 51 years, because of my administration.” — remarks Wednesday to reporters.

THE FACTS: Trump continues to ignore an increase in drug prices.

The Labor Department’s Consumer Price Index for prescription drug prices shows an increase of 0.3% in April compared with the same month last year. The index tracks a set of medications, both brand names and generics, and Trump has frequently made his boast since the updated numbers showing higher costs came out.

Other independent studies point to increasing prices for brand-name drugs as well and more overall spending on medications.

An analysis of brand-name drug prices by The Associated Press showed 2,712 price increases in the first half of January, compared with 3,327 increases during the same period last year. However, the size of this year’s increases was not as pronounced.

Both this year and last, the number of price cuts was minuscule. The information for the analysis was provided by the health data firm Elsevier.

THE FACTS: He’s not protecting health coverage for patients with pre-existing medical conditions. His Trump administration instead is pressing in court for full repeal of the Affordable Care Act, including provisions that protect people with pre-existing conditions from health insurance discrimination.

Trump and other Republicans say they’ll have a plan to preserve those safeguards, but the White House has provided no details.

Obama’s health care law requires insurers to take all applicants, regardless of medical history, and patients with health problems pay the same standard premiums as healthy ones. Bills supported in 2017 by Trump and congressional Republicans to repeal the law could undermine protections by pushing up costs for people with pre-existing conditions.

Left: U.S. President Donald Trump speaks about the investigation by Special Counsel Robert Mueller in the Rose Garden at the White House in Washington, on May 22. Photo by Leah Millis/Reuters