At hub for border crossings, families spread throughout U.S.

MCALLEN, Texas — Manuel Martinez, who fled Honduras because gangs were trying to recruit his 12-year-old son, was prepared to be separated from his child after paying a smuggler to cross the Rio Grande by boat and getting arrested by the U.S. Border Patrol.

It is not clear how many asylum-seekers are still entering the country, how many are being detained as families, and how many are being released. Nor it is known how long it will take for all parents and guardians to be reunited with their children.

Martinez pleaded guilty to illegal entry on Wednesday — the day President Donald Trump ordered an end to the separating of families — and, while he wasn’t kept under the same roof as his son, they were held in the same compound. They were reunited on Saturday, after five days apart, and were released into the U.S., a tracking device on Martinez’s ankle, while he pursues asylum.

“I was very worried even though we were never really separated,” he said in McAllen’s Greyhound station, as he and his son were about to board a bus to Atlanta to join a friend.

The McAllen station, a hub in the busiest U.S. corridor for illegal crossings, looks much as it did before the administration began enforcing a “zero-tolerance” policy in early May of prosecuting every illegal entry. The policy resulted in the separation of more than 2,300 children before Trump reversed course in the face of an international outcry and said families will remain together.

On a typical day, more than 100 asylum-seekers are released from McAllen-area holding facilities, clutching their belongings in clear plastic bags stamped with Department of Homeland Security logos, said Norma Pimentel, executive director of Catholic Charities of the Rio Grande Valley.

They are led by volunteers to the charity’s headquarters a few blocks away to shower, eat and rest — though volunteers’ first order of business is to distribute shoelaces because they are confiscated from immigrants in custody to prevent suicides.

“Every day is like this. It never ends,” Pimentel said as children played with toys on the floor while adults in ankle monitors sat in rows of plastic chairs. Federal authorities have for years used electronic monitoring devices to keep track of immigrants released while they await further court proceedings.

Still, McAllen, a city of 130,000 people in Texas’ Rio Grande Valley, is just a snapshot of the situation along the border, where Trump’s reversal on family separation has sown chaos and uncertainty and there has been little guidance from the administration.

It is not clear how many asylum-seekers are still entering the country, how many are being detained as families, and how many are being released. Nor it is known how long it will take for all parents and guardians to be reunited with their children.

Homeland Security said late Saturday that 522 youngsters have been reunited since they were separated under the zero tolerance policy and that it has established a process to ensure that family members know where their children are and can communicate with them.

It said that 2,000-plus children remain separated but that the government knows where all them are and is working to reunite them with their families. 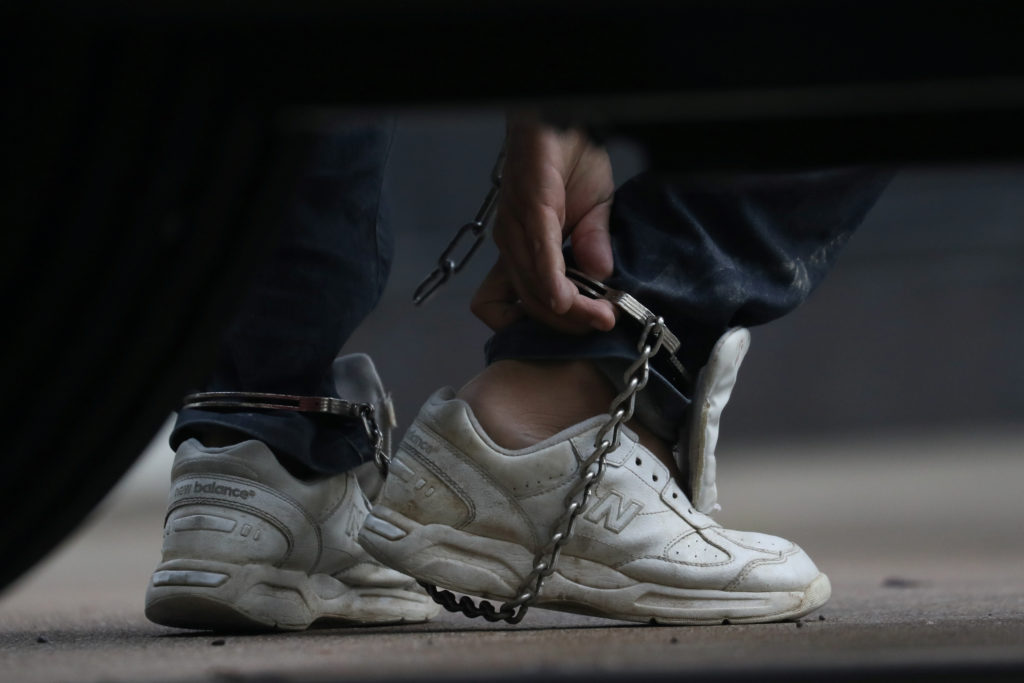 Undocumented immigrants in shackles arrive at a U.S. federal court for hearings in McAllen, Texas, on June 22, 2018. Photo by Loren Elliott/Reuters

Trump vented his frustration over the crisis in a tweet Sunday, saying border crossers shouldn’t be entitled to a day in court.

“We cannot allow all of these people to invade our Country,” the president wrote. “When somebody comes in, we must immediately, with no Judges or Court Cases, bring them back from where they came. Our system is a mockery to good immigration policy and Law and Order.”

Federal authorities are readying a special reunification center at a remote detention center in Port Isabel, about 55 miles (88 kilometers) east of McAllen.

About 70 families arrived at the Catholic Charities’ McAllen shelter late Saturday afternoon, and nearly all were gone by the following day, boarding buses to cities across the U.S.

Pimentel said most of Saturday’s arrivals were not charged criminally but she didn’t believe it signaled a change in the Trump administration’s policy of prosecuting every illegal entry.

Authorities have moved to detain more people, even asylum-seekers, but is constrained by lack of detention space, particularly for families. Immigration and Customs Enforcement has a total of about 3,300 beds at three family detention centers in Texas and Pennsylvania.

“They have a limit as to how much they can manage, and that’s maybe a determining factor in how many are released that day,” Pimentel said.

Patricia Lozano, 27, said she fled Honduras to find a higher-paying job and better support her three children, ages 6, 8 and 9. She was not charged criminally and never separated from her children.

She was on a grueling monthlong bus trip through Mexico when she learned that families were being separated, but she decided to take her chances.

“I was already on the journey,” she said as she waited for a bus to Los Angeles to join family. “Everything turned out OK walking with God.”

Abel, a 40-year-old coffee farmer from Jutiapa, Guatemala, asked for asylum at the U.S. border for himself and his 17-year-old son, Hugo. They were taken into custody Thursday, separated in the same detention center for two days, then reunited and released on Saturday.

He said he left his homeland because gangs were forcing his son to join their ranks. He asked that their last names not be used because he didn’t want to endanger his wife and five daughters back home.

Abel said the word is out that families may be separated at the border.

But “necessity always makes you take risks,” he said. He added of Trump: “The president says it will stop, but people keep coming.”

Left: Undocumented immigrant families are released from detention at a bus depot in McAllen, Texas, on June 22, 2018. Photo by Loren Elliott/Reuters