BUFFALO, N.Y. (AP) — Shenaya Ann Washington and a close friend cleared a small patch of grass at the base of a utility pole on Riley Street. They dug a hole there and planted a red rose bush seedling. Next to it, they leaned 10 prayer candles against the pole.

Washington said she chose that spot to memorialize the victims of last weekend’s massacre at Tops Friendly Market because it is closest to the store entrance she had always used as a part-time worker for Instacart, the grocery delivery service.

Sometimes when she would exit the store, Aaron Salter Jr., the slain retired police officer who worked security at Tops, would help Washington back to her car with the grocery orders, she said.

The shooter, whose racist attack deeply wounded east Buffalo’s Black community, has stolen much more than the neighborhood’s only grocery store and the sense of peace many residents felt in the cherished community gathering spot.

“He took away people who did for the community, just because of the color of their skin. It’s an eye opener. It’s a reality check,” Washington said.

During Sunday service, Pastor Russell Bell of the State Tabernacle Church of God in Christ, where shooting victim Heyward Patterson was a deacon, promised his congregation that they would hold a celebration of his life. Bell also encouraged his predominantly Black flock to lean into their faith.

“We’re going to be winners if we endure to the end,” he said.

Just over a week ago, a white gunman in body armor killed 10 Black shoppers and workers at the supermarket that has been temporarily closed. Three others were injured in the attack, which federal authorities are investigating as a hate crime. 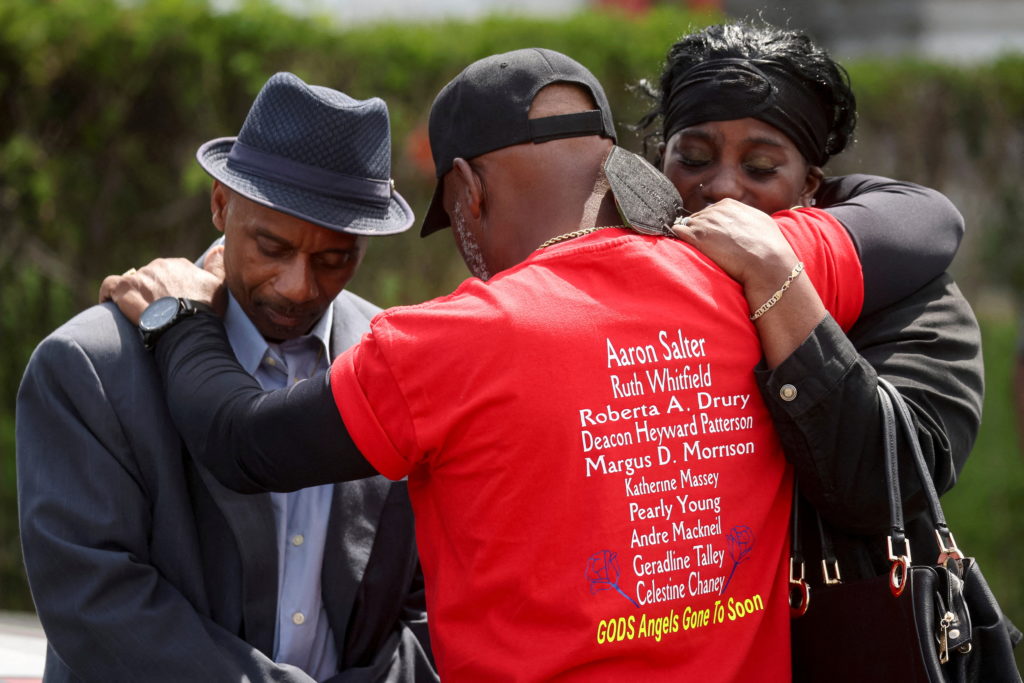 Mourners attend the funeral of Heyward Patterson in the wake of a weekend shooting at a Tops supermarket in Buffalo, New York, U.S. May 20, 2022. Photo By Brendan McDermid/Reuters.

Long before that 18-year-old avowed white supremacist inflicted terror in this community, Buffalo’s Black neighborhoods, like many others around the nation, had been dealing with wounds that are generations old. The attack has scraped off the scab hiding Black trauma and neglect that sit just below the surface in what’s called the City of Good Neighbors, residents, business owners and faith leaders said.

Healing will require not only an immediate flood of charity, but also systemic solutions, economic investments and mental health counseling that are long lasting, they said.

“It’s been great to see the outpouring of support, I must say that,” said Jackie Stover-Stitts, co-owner of Golden Cup Coffee, about a block from the Tops on Jefferson Avenue.

For the past few days, the atmosphere around her shop had been festival-like and, at times, a somber space of mourning. Organizations from across the nation, and even a few global charities, offered food and other essential goods to residents who relied on Tops to meet their basic needs.

“The only concern is that it’s not short lived,” Stover-Stitts said. “It would mean more if we could see, on Monday, that all those people with funds that came down to say how sorry they were could show it by investing in our area.”

Buffalo, with a population of 255,000 that is 47% white, 35% Black, 12% Hispanic and 6% Asian, is one of the nation’s most racially segregated cities. The neighborhoods around the Tops market are predominantly Black and impoverished.

Earlier in the week, civil rights leader the Rev. Al Sharpton pointed to racial and socioeconomic inequality that made the Tops a target for the shooter, who officials say drove hundreds of miles to find Black people to gun down.

“If there wasn’t but one supermarket in the Black community, he wouldn’t have gone to Tops,” Sharpton said at a prayer vigil held in Buffalo for the victims’ families on Thursday. 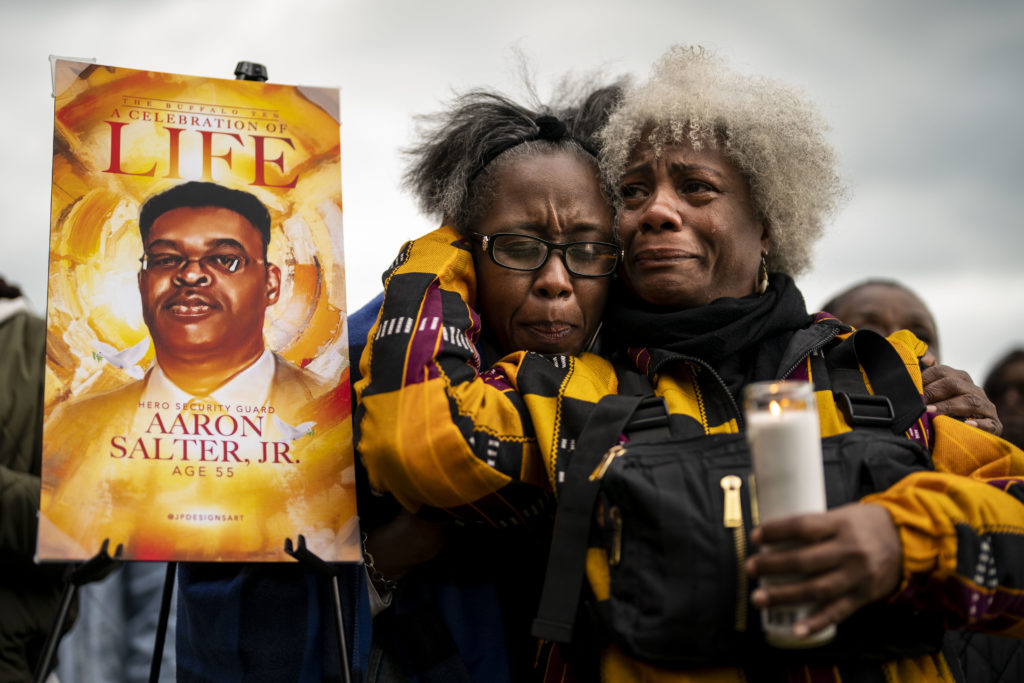 Janate Ingram, and Cariol Horne, both of Buffalo, attend a vigil across the street from Tops Friendly Market at Jefferson Avenue and Riley Street on Tuesday, May 17, 2022 in Buffalo, NY. The Supermarket was the site of a fatal shooting of 10 people at a grocery store in a historically Black neighborhood of Buffalo by a young white gunman is being investigated as a hate crime and an act of racially motivated violent extremism, according to federal officials. (Kent Nishimura / Los Angeles Times via Getty Images)

La’Tryse Anderson of Buffalo SNUG, a gun violence prevention organization, canvassed the neighborhood around the Tops with other volunteers to get a sense of residents’ needs. Some told her they needed groceries, toiletries, replacement appliances and even a utility bill paid.

“I wish I had a magic wand,” she said. “There were so many needs out here, before this (shooting) happened.”

Without real investments in the areas that surround the Tops, Anderson said, “I don’t think we’ll ever fully heal from this.”

Residents will definitely need the option of another supermarket, as some have vowed to never set foot in that Tops location again, she added. They are too traumatized.

Reshawna Chapple, a Black therapist and associate professor in the School of Social Work at the University of Central Florida, said the shock and grief caused by the supermarket shooting are made worse when people are not tending to their mental health. Systemic racism is part of the reason why too few in the Black community seek mental health counseling, either on a regular basis or in the wake of tragedy, she said.

“Every time something like this happens, it opens up the wounds all over again,” Chapple said. “We aren’t taught to acknowledge feelings that are negative. The ones who need help the most are definitely not going to ask for it.”

Mental health and grief counseling is why several community service organizations have been camped out around the supermarket for several days. With the Tops fenced off, organizations such as Feed Buffalo, Ramp Global Missions and LIFE Camp Inc., lined the surrounding streets with food trucks, mobile food pantries and barbecue grills serving chicken, burgers and hot dogs.

A trio of massage therapists offered neck and back treatments to victims’ families and other residents. A local Starbucks gave out free coffee to passersby.

An evangelist baptized people in a large galvanized stock tank on the corner of Riley Street and Jefferson Avenue. The local Muslim community offered prayers and chants of “We are with you” near the supermarket.

Gregory Jackson Jr., a Washington-based organizer with the Community Justice Action Fund, said he came to Buffalo to help coordinate relief efforts to victims’ families and residents, who were too traumatized to ask for what they need.

“A lot of folks have not even gotten close to going back to normal life yet,” he said. “You get local police, cameras and media, from all over the world. But the community is stuck to pick up the pieces without any bigger support.”

The supermarket shooting has also drawn support for the activists from around the nation. On Saturday, organizers with Black Lives Matter Grassroots, a national collective of chapters, held a vigil for Buffalo. Organizers from Boston, Detroit, Virginia Beach, Virginia and Minneapolis attended and vowed to be with Buffalo’s residents as they continued to heal from the racist attack.

“We cannot have a world that steals the lives of our grandmothers,” said Melina Abdullah, who directs the BLM group and founded its Los Angeles chapter. “We are duty bound to shut that down.”

Left: BUFFALO, NY - MAY 19: Kimberly Johnson, of Buffalo, places her hand on a photo of the late Hayward Patterson, at makeshift memorial across the street from the scene of a mass shooting at Tops Friendly Market at Jefferson Avenue and Riley Street on Thursday, May 19, 2022 in Buffalo, NY. The fatal shooting of 10 people at a grocery store in a historically Black neighborhood of Buffalo by a young white gunman is being investigated as a hate crime and an act of racially motivated violent extremism, according to federal officials. (Kent Nishimura / Los Angeles Times via Getty Images)