SELMA, Ala. — Democratic presidential candidates gathered Sunday in this crucible of the civil rights movement to appeal for black support in a town where demonstrators were once beaten for marching for the right to vote.

Just hours after strong support by black voters in South Carolina lifted Joe Biden to his first primary victory, the former vice president was set to speak during the morning worship at historic Brown Chapel AME Church, where former New York Mayor Michael Bloomberg also planned to talk. The two split the endorsements of leading black political groups in Alabama, one of 14 states voting on Tuesday.

Those two candidates plus Sens. Elizabeth Warren and Amy Klobuchar and former Mayor Pete Buttigieg were scheduled to join marchers re-enacting the walk across the steel-arched Edmund Pettus Bridge that ended in mayhem decades ago. Tom Steyer also is attending despite suspending his campaign after a poor showing in South Carolina.

Rep. Terri Sewell, the lone black member of Alabama’s congressional delegation, urged hundreds of people attending a community breakfast to vote for Biden and enable “a return to civility.”

“Joe Biden not only knows me, he knows you,” she said. 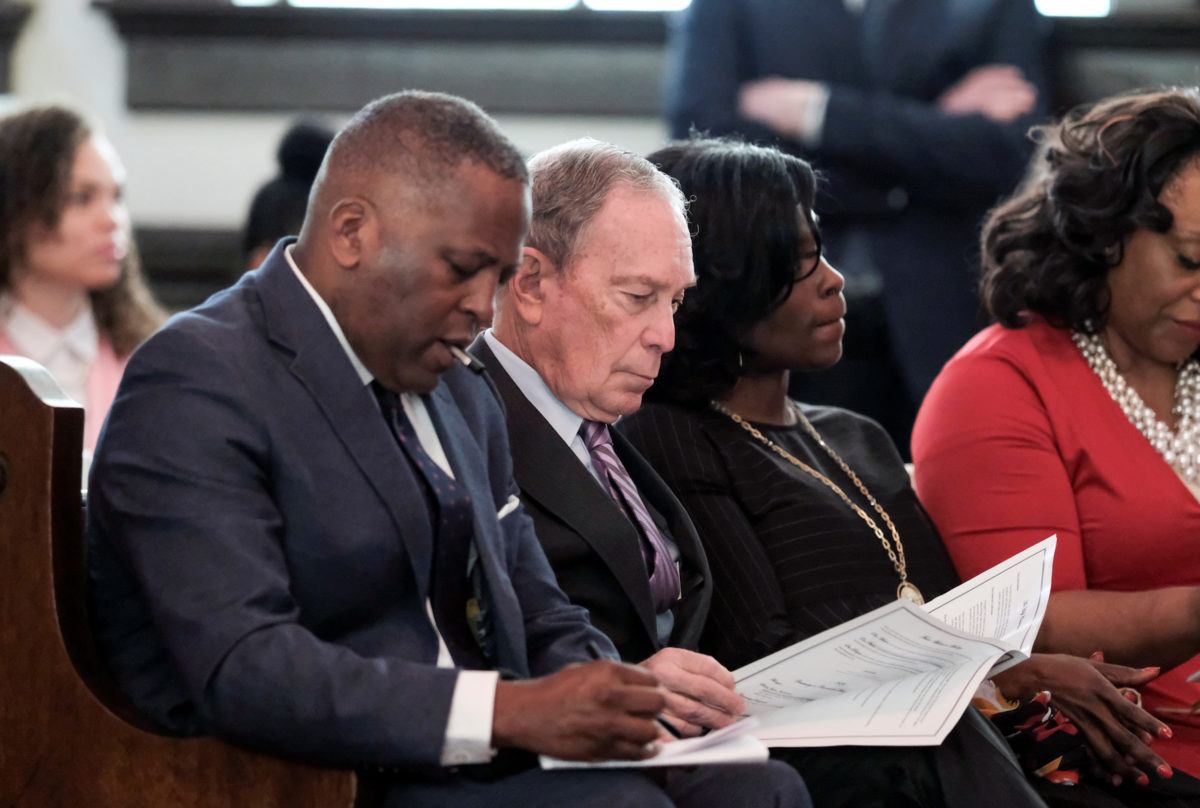 Presidential candidate Michael Bloomberg reviews his remarks at a church service to commemorate the 55th anniversary of the “Bloody Sunday” march in Selma, Alabama, U.S., March 1, 2020. Photo by Michael A. McCoy/Reuters.

Alabama state troopers beat and tear-gassed hundreds of voting-rights demonstrators trying to march from Selma to Montgomery, the capital, on March 7, 1965. Only 25 at the time and years away from joining Congress, Rep. John Lewis led the marchers and was among the injured.

The years since have been tough on Selma, where shuttered businesses and vacant, dilapidated homes stand just blocks from magnificent antebellum mansions. The city and surrounding Dallas County typically have some of the highest jobless rates in the state.

The town’s population is steadily declining, and Census statistics show 41% of the estimated 17,800 people who remain live in poverty. About 82% of the town’s residents are black, and both schools and neighborhoods are mostly segregated by race with blacks attending public schools and whites attending private academies. Crime, much of it linked to gangs, is a constant problem, authorities say.

Selma Mayor Darrio Melton endorsed Biden as someone who could help.

“Joe understands the issues families in Selma and communities across the country face,” he said.

Located about 50 miles west of Montgomery, Selma has deep ties to both civil rights and the Civil War. Aside from being the site of Bloody Sunday, the Edmund Pettus Bridge is named for a Confederate general and U.S. senator who advocated for white supremacy.