WASHINGTON (AP) — Protesters stirred by the death of George Floyd vowed Friday to turn an extraordinary outpouring of grief into a sustained movement as demonstrations shifted to a calmer, but no less determined focus on addressing racial injustice.

In Minneapolis, where Floyd died in police custody, the city agreed to ban police chokeholds and require officers to intervene any time they see unauthorized force by another officer. The changes are part of a stipulation between the city and state officials who launched a civil rights investigation into Floyd’s death. The City Council was expected to approve the agreement, which will be enforceable in court.

The country’s most significant demonstrations in a half-century — rivaling those during the civil rights and Vietnam War eras — resumed for an 11th day nationwide with continued momentum as the mood largely shifted from explosive anger to more peaceful calls for change. Formal and impromptu memorials to Floyd stretched from Minneapolis to North Carolina, where family members will gather Saturday to mourn him, and beyond.

Josiah Roebuck, a university student who used social media to help gather 100 people to demonstrate Friday in an Atlanta suburb, is confident the momentum will last.

“Once you start, you’re going to see this every day,” said Roebuck, who has attended multiple protests. “I just want minorities to be represented properly.”

Protests across the country had initially been marred by the setting of fires and smashing of windows, but Friday marked the third day of more subdued demonstrations. At a heartfelt tribute to Floyd in Minneapolis on Thursday, the Rev. Al Sharpton outlined plans for a commemorative march on Washington in August, vowing that the movement will “change the whole system of justice.”

Floyd’s body was being taken to North Carolina, the state where he was born 46 years ago, for a public viewing and private service for family Saturday. Then in Texas, where Floyd lived most of his life, services culminating in a private burial will take place Monday and Tuesday.

In Washington, city workers and volunteers painted “Black Lives Matter” in enormous yellow letters on the street leading to the White House on Friday in a sign of local leaders’ embrace of the protest movement. The mural stretched across 16th Street for two blocks, ending just before the church where President Donald Trump staged a photo-op earlier this week after federal officers forcibly cleared a peaceful demonstration to make way for the president and his entourage. 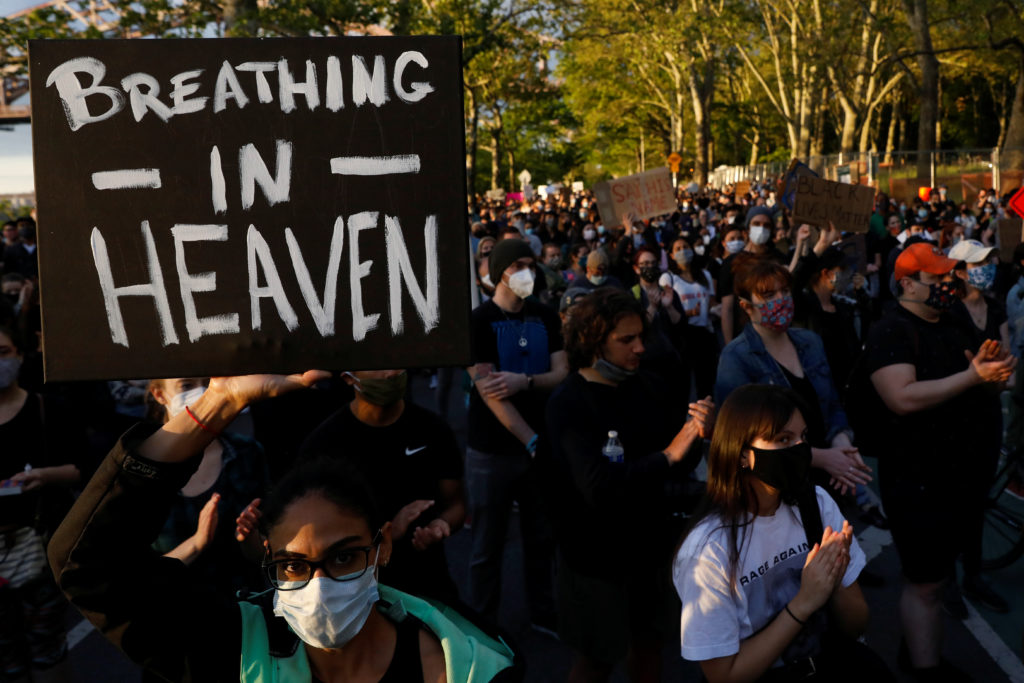 A woman wearing a protective face mask holds a sign during a rally and candle light vigil against the death in Minneapolis police custody of George Floyd, at Queens Park in the Queens borough of New York City, U.S., June 1, 2020. Photo by REUTERS/Brendan McDermid

“The section of 16th Street in front of the White House is now officially ‘Black Lives Matter Plaza,’” Mayor Muriel Bowser said in a tweet shortly after the mural was completed.

The project follows Bowser’s verbal clashes with the Trump administration over the response to protests over Floyd’s killing. Still, the local chapter of Black Lives Matter took a swipe at Bowser on Twitter by saying the project distracts from their efforts to shift funds from local police to community investment.

Meanwhile, in a sign protesters’ voices were being heard, more symbols of slavery and the Confederacy came down. Mobile, Alabama, removed a statue of a Confederate naval officer after days of protests there, while Fredericksburg, Virginia, removed a 176-year-old slave auction block after several years of efforts by the NAACP.

Community activists were working to convert anger and grief into long-term action. Black Lives Matter Alliance Broward circulated a sign-up sheet at a Fort Lauderdale, Florida, protest that drew 1,500 names of people who want to stay involved. The group followed up with each person this week suggesting simple actions such as emailing or calling to demand local change.

“We are taking more of the strategy of: ‘How do we actually invest people’s energy beyond protesting?’” said Tifanny Burks, a community organizer. “We are thinking long term.”

This weekend, they were building a church altar with the names of victims killed by local police and having their family members speak. On Monday, they plan a workshop to help people engage at the local level, including mobilizing in upcoming elections.

“Every single day it’s growing from people who want to get more involved, who want to take more actions, so we’re going to be mobilizing those folks,” Burks said.

In Minneapolis, organizer Sam Martinez said regular meetings and a mailing list of about 5,000 has sustained the Twin Cities Coalition for Justice 4 Jamar, formed after the 2015 shooting death of Jamar Clark during a struggle with two white officers.

“We meet every week, because we know that’s what it takes,” Martinez said.

Nakia Wallace, an organizer of protests in Detroit, said people were beginning to understand the movement’s power.

“The world is watching,” she said, adding: “The main strategy is to get people to collectively come out and make demands until those demands are met.”

Another Detroit organizer, Brian Silverstein, acknowledged that maintaining the pace of protests is demanding and said less visible efforts are also important.

“We may not protest every day. That is tiring,” he said. “I woke up this morning and it felt like my calves were falling off. A lot of our folks are elderly and can’t be out in the streets. This movement is not just these marches. The marches are great, but we need to force the government to do the things we want them to do.”

For the past week in Richmond, Virginia, Austin Carroll, a 28-year-old musician, has spent six hours a day marching or protesting near a soaring statue of Confederate Gen. Robert E. Lee, which the governor agreed this week to remove.

Carroll, a member of Black Lives Matter, has strained his voice from yelling and his 6-year-old son, Levi, has blisters on his feet. But Carroll said they plan to continue to march every day until more changes come, including deescalation training for police.

“I am tired. My voice and legs are gone,” Carroll said. “We’re resting right now, but we’ll be back out here marching tonight.”

Left: A raised fist is seen as protesters gather to memorialize George Floyd, who died in Minneapolis police custody, at the scene of his arrest in Minneapolis, Minnesota, U.S. June 4, 2020. Photo by Adam Bettcher/REUTERS