Two-thirds of black Americans don’t trust the police to treat them equally. Most white Americans do.

Nearly half of black Americans have very little or no confidence that police officers in their community treat people with different skin colors the same, according to the latest PBS NewsHour-NPR-Marist poll. But overall, only 18 percent of Americans take that view — an illustration in itself that people of different races are living different realities in the United States.

In the days since George Floyd’s death cracked open the country with demonstrations of people calling for the end of racism in policing, a third of all Americans — 35 percent — said they have a great deal of confidence that police officers in their communities treat black and white people equally, in this poll conducted June 2-3.

Community trust in law enforcement has eroded somewhat over the past few years, as police-involved killings of black people have come to national attention, prompting pain and outrage. In December 2014, months after the shooting death of teenager Michael Brown by a police officer in Ferguson, Missouri, a larger number — 41 percent of Americans — had a high degree of confidence in police. 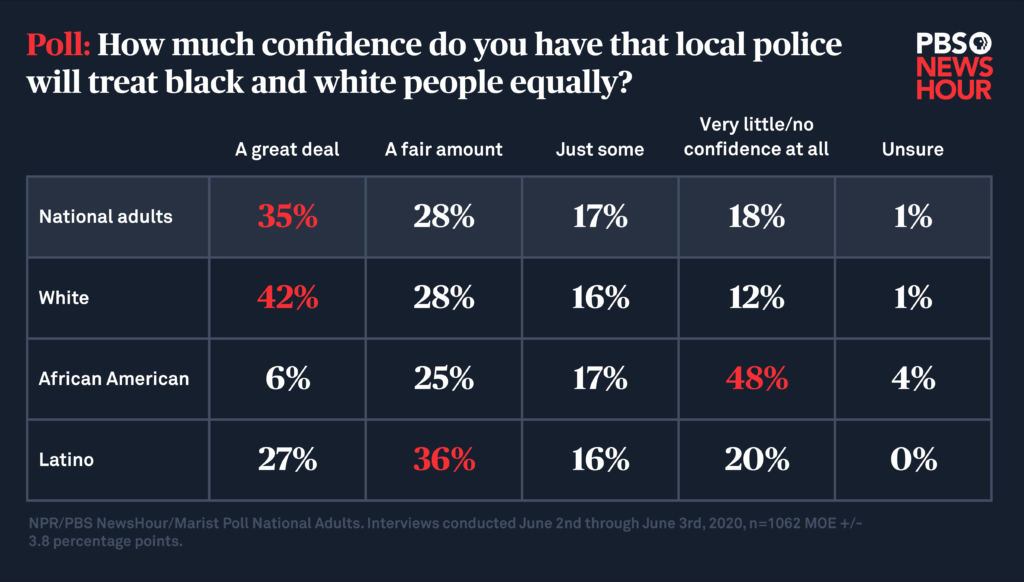 “Black communities are often over-policed and over-profiled, which can even lead to fatality, as recent cases have shown us,” said Dr. Michael Lindsey, who directs the McSilver Institute for Poverty Policy and Research at New York University and has studied the effects of racism on mental health in black youth. “Will an interaction with the police result in an outcome characterized by physical harm or unequal treatment by the court system? That is a real concern” for black Americans.

To Lindsey, the views expressed in this nationally representative poll of 1,062 U.S. adults correspond with “a history of negative interactions and experiences between the police and blacks.”

While this poll asked specifically about perceptions about policing of black and white people, reports of police violence in brown communities have also gained greater awareness in recent years.

Floyd’s death and some of his last words, “I can’t breathe” — the same words spoken by Eric Garner, another black man whose death after being restrained by police was caught on video — ignited protests last week that have spread to dozens of cities across the country and show no signs of stopping. Some protests have exploded into intentional acts of property damage and ransacking of stores, and been marked by sometimes debilitating or deadly use of force by police.

“I had seen police brutality already, in real life and on [the TV],” protester Devin Hinnant told PBS NewsHour’s Yamiche Alcindor in Washington. But something about hearing Floyd say, “I can’t breathe,” made Hinnant feel he needed to know why “that officer thought it was permissible to keep his knee on that man’s neck, three minutes after he died.”

In the U.S., nearly two-thirds of Americans view the rallies and marches as mostly legitimate protests. That includes 87 percent of Democrats and 65 percent of independents. Just 28 percent of U.S. adults overall believe people are mostly acting unlawfully, including a higher proportion of Republicans — 59 percent. 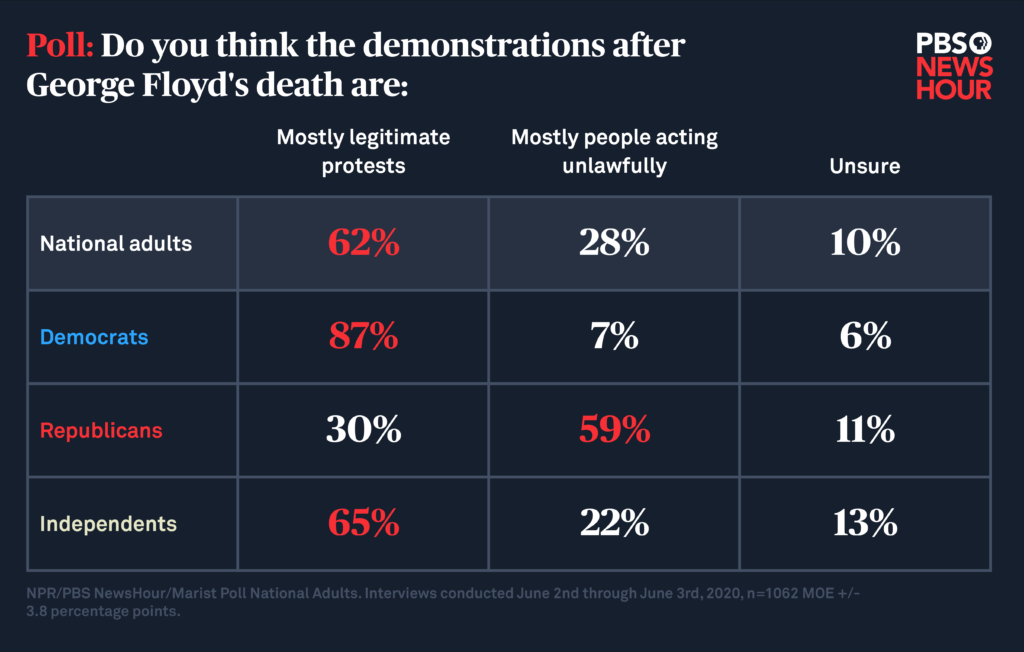 The protests have exposed generational fault lines on issues of race,with nearly three-quarters of Gen Z and millennials — those aged 18-39 — believing the protests are legitimate, compared to 60 percent of Generation X, 55 percent of baby boomers, and 48 percent of those over the age of 74.

In many communities where people demonstrated, police used rubber bullets and tear gas to control crowds, in some cases severely injuring people. In one instance, photographer Linda Tirado lost sight in one eye after she said she was shot with a rubber bullet during a protest in Minneapolis. The city’s police department disputed the claim. 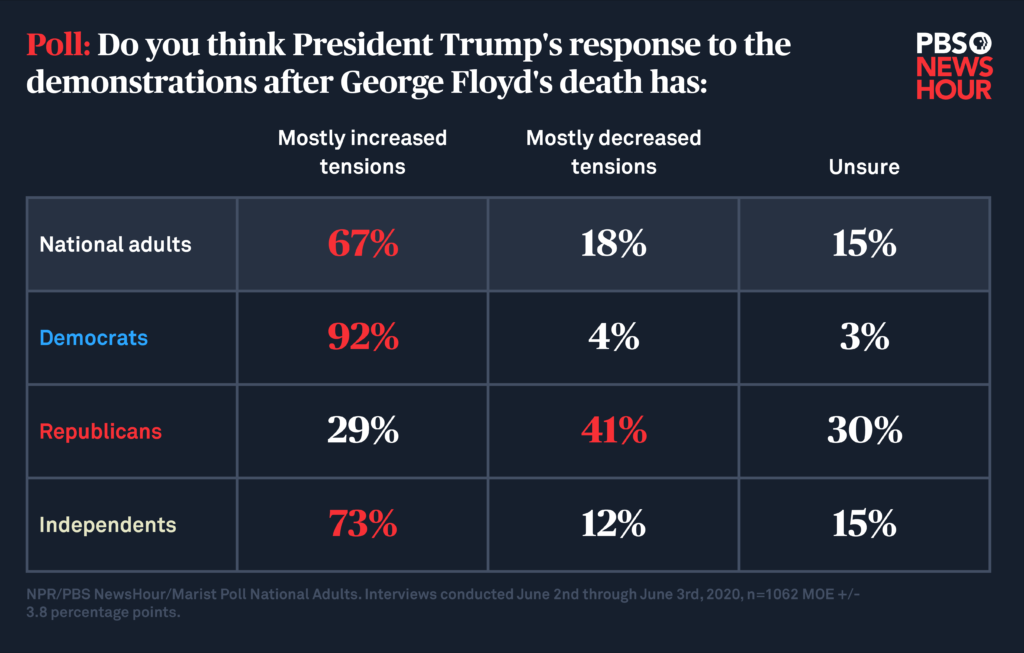 On May 29, Trump called protesters “thugs” and suggested he would respond with military force to control the situation, drawing criticism for stoking tensions.

“These THUGS are dishonoring the memory of George Floyd, and I won’t let that happen,” Trump tweeted. “Just spoke to Governor Tim Walz and told him that the Military is with him all the way. Any difficulty and we will assume control but, when the looting starts, the shooting starts.” In an unprecedented move, Twitter hid the tweet on his timeline behind a warning that said it “violated the Twitter Rules about glorifying violence.”

An overwhelming majority of African Americans — 88 percent — believe Trump’s response to the protests has only increased tensions, as do 69 percent of Latinos and 63 percent of white Americans.

In a June 1 call, Trump chastised state governors for their responses to protesters, telling them “most of you are weak”and demanding a crackdown on violence.

’We haven’t seen a lot of progress’

In recent years, tragedies like Brown’s death in August 2014 have propelled the Black Lives Matter movement and spurred calls to reform policing. Lately, a number of killings of black Americans have seared the national conscience again — and again. On Feb. 23, Ahmaud Arbery, 25, had jogged slightly more than 2 miles from his home when two white men, Gregory and Travis McMichael, shot and killed him in an incident caught on tape by a third white man, William Bryan. Arbery was black. Initially, investigators did not pursue criminal charges until Bryan’s video surfaced publicly. By June 4, the three men were facing felony murder charges.

On March 13, police officers shot and killed 26-year-old black woman Breonna Taylor during the execution of a warrant for her home in Louisville, Kentucky. Officers opened fire, killing Taylor, after her boyfriend reportedly fired a warning shot upon being surprised by police who he said didn’t announce themselves.

“Nine minutes is not a snap decision.”

Tensions came to a crescendo on May 25 when Floyd, 46, died as onlookers pleaded with police officers who had him pinned to the ground, one officer’s knee on his neck, for nearly nine minutes. The last moments of Floyd’s life were captured in a video that quickly went viral.

Police leadership is well aware that they need to rebuild community trust, said John Hollywood, a policing researcher at the RAND Corporation who has worked closely with law enforcement departments and policing suppliers. But, in the years since Ferguson, he said, some cities have seen improvements, but “we haven’t seen a lot of progress in outcomes” consistently across the country.

“Nine minutes is not a snap decision,” he said.

Left: A protester stands in front of U.S. Secret Service officers at Lafayette Square near the White House on June 1 after the park was cleared for President Donald Trump's walk to the historic St. John's Church, which sustained minor fire damage during earlier demonstrations. Photo by Frank Carlson/PBS NewsHour