Devastating flooding in central Appalachia kills at least 3 in Kentucky

Gov. Andy Beshear announced the deaths but grimly predicted the state’s death toll could reach double digits. He said hundreds of properties could be destroyed.

“In a word, this event is devastating,” the governor said Thursday. “And I do believe it will end up being one of the most significant, deadly floods that we have had in Kentucky in at least a very long time.

Beshear was referencing the rebuilding underway in western Kentucky, where several towns were devastated by deadly tornadoes late last year.

Flash flooding and mudslides were reported across the mountainous region of eastern Kentucky, western Virginia and southern West Virginia, where thunderstorms have dumped several inches of rain over the past few days.

“Guys, I don’t know how much more rain Buckhorn can handle,” Marlene Abner Stokely said in a video she posted on Facebook, showing how Squabble Creek overflowed and swamped a historic Kentucky church. “You can see it is pretty much taken over.”

In Breathitt County in eastern Kentucky, floodwaters covered roads and swamped homes and businesses. A volunteer fire department had to abandon its flooded-out station, authorities said.

“There are a lot of people in eastern Kentucky on top of roofs waiting to be rescued,” Beshear said earlier Thursday. “There are a number of people that are unaccounted for and I’m nearly certain this is a situation where we are going to lose some of them.” 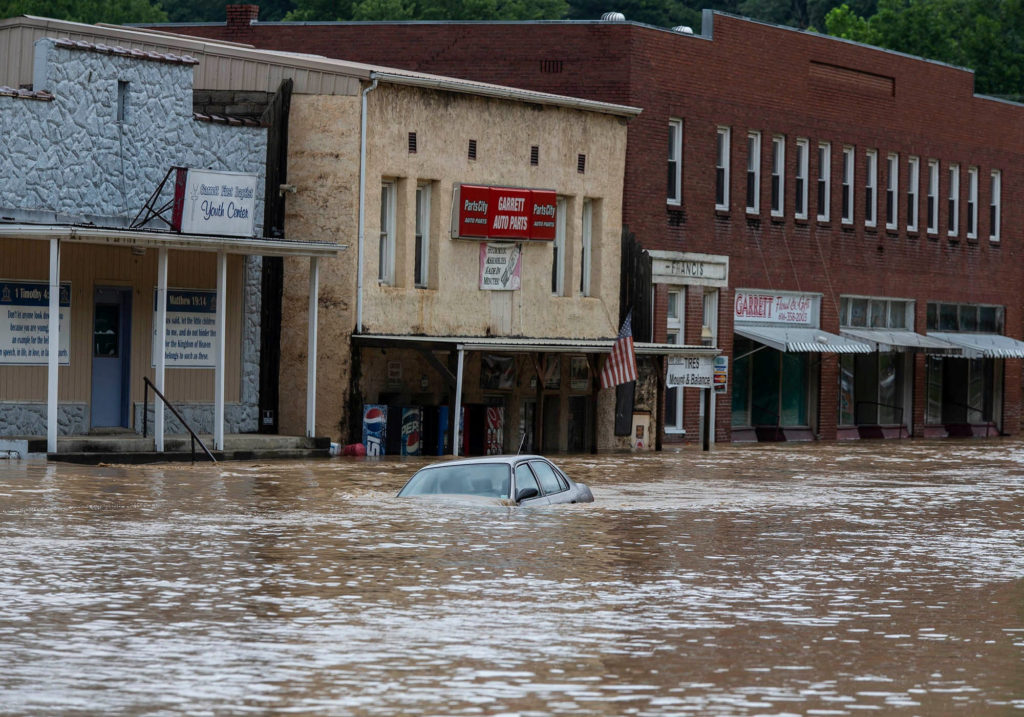 A car is submerged in flood waters along Right Beaver Creek, following a day of heavy rain in in Garrett, Kentucky, U.S. July 28, 2022. Photo by Pat McDonogh/USA TODAY NETWORK via REUTERS

“We’re just in the rescue mode right now,” Stacy said, speaking with The Associated Press by phone as he struggled to reach his office in Hazard. “Extreme flash flooding and mudslides are just everywhere.”

The storms hit an Appalachian mountain region where communities and homes are built on steep hillsides or down in the hollows between them, where the only flat land often shoulders creeks and streams that can rise in a hurry. But this one is far worse than a typical flood, said Stacy, 54.

“I’ve lived here in Perry County all my life and this is by the far the worst event I’ve ever seen,” he said.

Roads in many areas weren’t passable after as much as 6 inches (15 centimeters) of rain had fallen in some areas by Thursday, and 1-3 more inches (7.5 centimeters) could fall, the National Weather Service said.

Beshear said he has deployed National Guard soldiers to the hardest-hit areas, and three parks in the region were opened as shelters for displaced people.

“It’s the worst we’ve had in quite a while,” Friley told WKYT-TV, “It’s county-wide again. There’s several spots that are still not accessible to rescue crews.”

Perry County dispatchers told WKYT-TV that floodwaters washed out roads and bridges and knocked homes off foundations. The city of Hazard said rescue crews were out all night, urging people on Facebook to stay off roads and “pray for a break in the rain.”

Communities in southwest Virginia also were flooding, and the National Weather Service office in Blacksburg, Virginia, warned of more showers and storms on Thursday.

In Buchanan County, which was hit by severe flooding two weeks ago, preliminary assessments of the previous flooding were postponed for safety amid the latest high water, according to Virginia Department of Emergency Management spokesperson Lauren Opett. Officials were determining whether its feasible to conduct the assessments virtually, she said.

And in Wise County, the Office of Emergency Management warned of imminent flooding and road closures in the Pound Bottom area on Thursday morning. Officials advised residents to shelter in place until floodwaters recede or evacuate to a shelter in an elementary school.

Left: Van Jackson checks on his dog, Jack, who was stranded at a church by flood waters along Right Beaver Creek, following a day of heavy rain in in Garrett, Kentucky, U.S. July 28, 2022. Jackson owns an auto parts store in town and said he doesn't have flood insurance to cover his loss. Photo by Pat McDonogh/USA TODAY NETWORK via REUTERS