SAN FRANCISCO (AP) — Firefighters say they hoped dying winds would enable them to bear down on a wildfire that exploded in the Northern California wine country, prompting tens of thousands of evacuations while a second blaze killed at least three people.

The Glass Fire raged through Napa and Sonoma counties on Monday, tripling in size to around 56.6 square miles (146.59 square kilometers) without any containment.

The fire north of San Francisco was driving through brush that hadn’t burned for a century, even though surrounding areas were incinerated in a series of blazes in recent years.

But dry winds that gave the flames a ferocious push appeared to have eased by Monday evening and firefighters were feeling “much more confident,” said Ben Nicholls, a division chief with the California Department of Forestry and Fire Protection, known as Cal Fire.

“We don’t have those critical burning conditions that we were experiencing those last two nights,” he said.

The Glass Fire is one of nearly 30 wildfires burning around California and the National Weather Service warned that hot, dry conditions with strong Santa Ana winds could remain a fire danger in Southern California into Tuesday.

In a forested far northern part of the state, more than 1,200 people were evacuated in Shasta County for the Zogg Fire.

Three people have died in the fire, Shasta County Sheriff Eric Magrini said Monday. He gave no details but urged people who receive evacuation orders: “Do not wait.”

Residences are widely scattered in the area, which was torched just two years ago by the deadly Carr Fire — infamously remembered for producing a huge tornado-like fire whirl.

Pacific Gas & Electric had cut power to more than 100,000 customers in advance of gusty winds and in areas with active fire zones. The utility’s equipment has caused previous disasters, including the 2018 Camp Fire that killed 85 people and devastated the town of Paradise in the Sierra Nevada foothills.

By Monday night, the utility said it had restored electricity to essentially all of those customers. However, PG&E said about 24,000 people remained without power in areas affected by two fires in Napa, Sonoma, Shasta and Tehama counties.

The Glass Fire began Sunday as three fires that merged and drove vineyards and mountain areas into eastern Santa Rosa. Some 70,000 people are under evacuation orders, including the entire 5,000-plus population of Calistoga in Napa County. 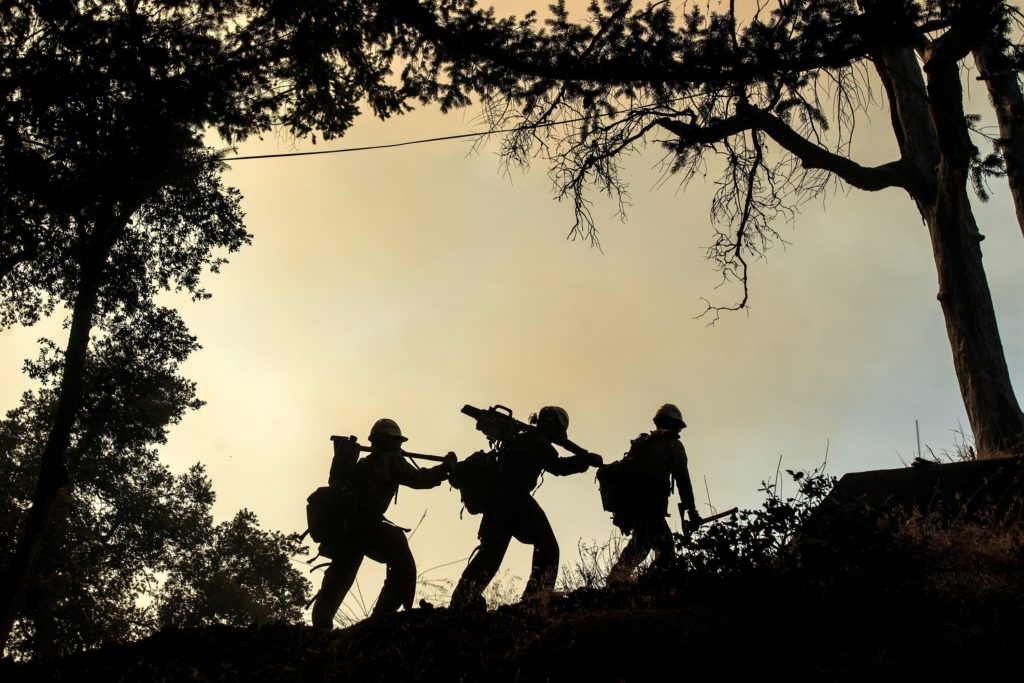 Some people were injured and Sonoma County sheriff’s deputies had to rescue people who ignored evacuation orders, officials said.

Sonoma County Supervisor Susan Gorin, who lives in the Oakmont area of Santa Rosa, heeded the order to flee late Monday night. It took her nearly two hours of crawling along a jammed road to reach safety.

Gorin’s home was damaged in another fire three years ago and she was rebuilding it. She saw three neighboring houses in flames as she fled.

“We’re experienced with that,” she said of the fires. “Once you lose a house and represent thousands of folks who’ve lost homes, you become pretty fatalistic that this is a new way of life and, depressingly, a normal way of life, the megafires that are spreading throughout the West.”

Gorin said it appeared the fire in her area was sparked by embers from the Glass Fire.

Ed Yarbrough, a wildfire evacuee from St. Helena in Napa County, watched firefighters douse flames across from his house Monday.

“I can see in the distance that it looks like it’s intact,” he said but said spot fires were still being doused.

“I know we’re not really out of the woods yet, and the woods can burn.”

“So I know we’re not really out of the woods yet, and the woods can burn,” he said.

The fires came as the region approaches the anniversary of the 2017 fires, including one that killed 22 people. Just a month ago, many of those same residents were evacuated from the path of a lightning-sparked fire that became the fourth-largest in state history.

Officials did not have an estimate of the number of homes destroyed or burned, but the blaze engulfed the Chateau Boswell Winery in St. Helena and at least one five-star resort.

Numerous studies in recent years have linked bigger wildfires in America to climate change from the burning of coal, oil and gas. Scientists say climate change has made California much drier, meaning trees and other plants are more flammable.