DALLAS — About 20 minutes before the shooting started at an El Paso Walmart, a rambling screed was posted to an online message board saying the massacre was in response to an “invasion” of Hispanics coming across the southern border.

Titled “The Inconvenient Truth,” it railed against the dangers of mass immigration and warned that Hispanics will eventually take over the economy and government. The writer argued that attacking “low-security” targets was a way to “fight to reclaim my country from destruction.”

Investigators increasingly believe these are the words of 21-year-old suspect Patrick Crusius, who surrendered shortly after Saturday’s rampage, and they are looking closely at the writing as they consider whether to prosecute the slaughter of 20 people and the wounding of 26 more as a hate crime.

“We have to attribute that manifesto directly to him,” El Paso Police Chief Greg Allen said Sunday at a news conference. “And so we’re going down that road.”

What remains a mystery is why Crusius chose El Paso, which has figured prominently in the immigration debate, and a shopping complex just five miles from the U.S.-Mexico border. The scene was a 10-hour drive and a world away from the life he lived growing up in a leafy, upper-middle-class suburb of Dallas.

Security video showed a skinny young man marching through the front door of the Walmart in a black T-shirt and khaki pants, carrying an AK-47 military-style rifle with an extended capacity magazine. Witnesses say he went aisle by aisle through a store packed with people stocking up on back-to-school supplies. The dead included at least three Mexican citizens and a 25-year-old mother of three who was shot while holding her 2-month-old baby.

The first sentence of the online rant posted on the 8chan message board expressed support for the man accused of killing 51 people at two New Zealand mosques in March after posting a 74-page document promoting a white supremacist conspiracy theory called “the great replacement.” That theory, promoted by French writer Renaud Camus, argues there is a plot by elites to replace whites with non-white immigrants in Europe and around the world.

The online rant speaks of a “Hispanic invasion of Texas.” 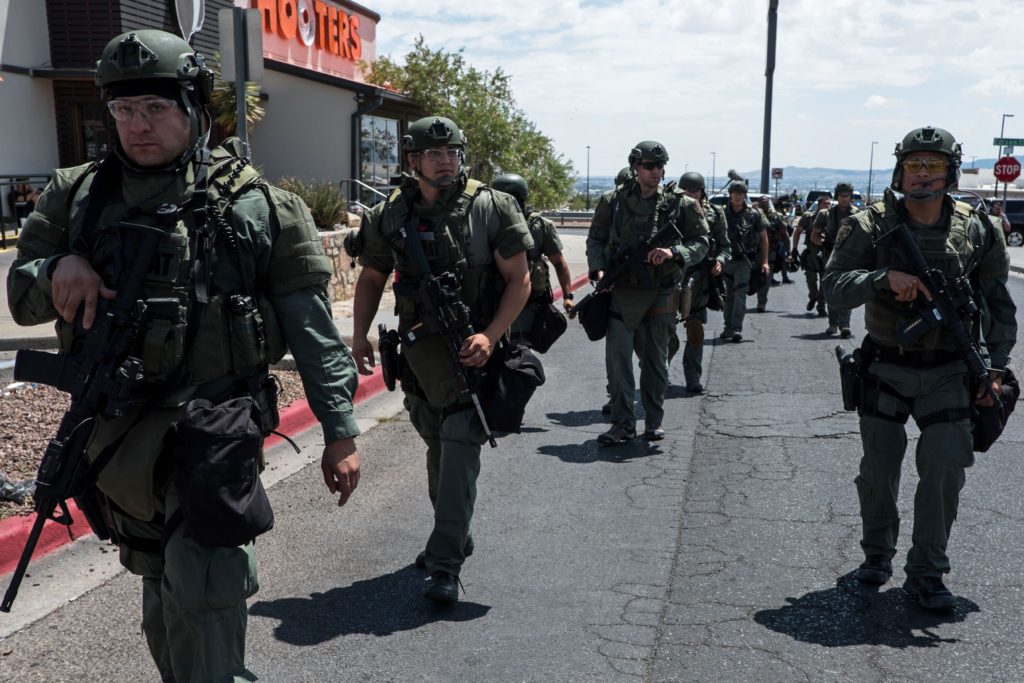 Law enforcement agents respond to an active shooter at a Wal-Mart near Cielo Vista Mall in El Paso, Texas, on August 3, 2019. – A gunman armed with an assault rifle killed 20 people Saturday when he opened fire on shoppers at a packed Walmart store in the latest mass shooting in the United States. Photo by Joel Angel Juarez/AFP/Getty Images.

“They are the instigators, not me,” it says. “I am simply defending my country from cultural and ethnic replacement brought on by an invasion.”

Though a Twitter account that appears to belong to Crusius included pro-Trump posts praising the plan to build more border wall, the writer of the online document says his views on race predated Trump’s campaign and that any attempt to blame the president for his actions was “fake news.”

Still, some of the language included in the document parroted Trump’s own words, characterizing Hispanic migrants as invaders taking American jobs and arguing to “send them back.” Though the writer denied he was a white supremacist, the document says “race mixing” is destroying the nation and recommends dividing the United States into territorial enclaves determined by race.

The writer went on to say he has an AK-47-style semi-automatic rifle and coolly debates the positives and negatives of using that firearm rather than another military-style weapon, the AR-15, for killing as many people as possible.

Crusius, the son of a licensed therapist and a nurse, was seen on social media postings from his years at Plano High School snarling into the camera in a selfie. On his LinkedIn page, since removed, it lists a job bagging groceries and the comment: “I’m not really motivated to do anything more than what’s necessary to get by. Working in general sucks. … I spend about 8 hours every day on the computer so that counts toward technology experience I guess.”

Under skills, he posted “Nothing really.”

Police in Crusius’ hometown of Allen, a community of about 100,000 residents 20 miles north of Dallas, said their only significant contact with him over the years was a 2014 call by his parents that he ran away. He came home 30 minutes later.

Information from an online database shows Crusius registered to vote on Election Day in 2016, not long after his 18th birthday. He listed his party affiliation as Republican.

Collin College, north of Dallas, confirmed that Crusius had been enrolled as a student from fall 2017 to spring 2019.

A Twitter account under Crusius’s name that appeared not to have been updated since 2017 included a photo of Trump sitting at his desk in the Oval Office and a pro-Trump poll asking about the best way to secure the country. The potential responses were the hashtags #BuildTheWall, #NoSanctuaryCities, #KeepGitmoOpen and #BanSyrianRefugees.

Crusius responded by tweeting “#BuildTheWall is the best way that @POTUS has worked to secure our country so far!”

More than a dozen federal, state and local law enforcement officers assembled Saturday at a house in Allen. A woman answered the door at the gray stone house after a group of officers knocked. They appeared to speak with her briefly before coming inside.

Court records show Crusius’ mother, Lori Lynn Crusius, filed for divorce in 2011. She has been a nurse in Texas since 1990. His father, John Bryan Crusius, is a licensed counselor. He also was a licensed instructor for alcohol education programs for minors.

Left: Texas State Troopers keep watch outside the Cielo Vista Mall Wal-Mart where a shooting left 20 people dead in El Paso, Texas, on August 4, 2019. - Texas authorities are investigating the Saturday mass shooting at a Walmart store in El Paso as a possible hate crime, the city's police chief said, as authorities study an online manifesto linked to the suspect. A 21-year-old from Allen, a suburb of Dallas, surrendered to police outside the store after the rampage that left 20 people dead and 26 wounded.US media identified him as Patrick Crusius, who is white, and linked him to a "manifesto" posted online that includes passages railing against the "Hispanic invasion" of Texas. Photo by Mark Ralston/AFP/Getty Images