FORT MYERS, Fla. (AP) — With the death toll from Hurricane Ian rising and hundreds of thousands of people without power in Florida and the Carolinas, U.S. officials vowed Sunday to unleash a massive amount of federal disaster aid as crews scrambled to rescue people stranded by the storm.

Days after Ian tore through central Florida, carving a deadly path of destruction into the Carolinas, water levels continued rising in some flooded areas, inundating homes and streets that were passable just a day or two earlier.

With branches strewn across the grounds of St. Hillary’s Episcopal Church in Ft. Myers, the Rev. Charles Cannon recognized the immense loss during his Sunday sermon but also gave thanks for what remained. That included the church’s stained-glass windows and steeple.

Deanne Criswell, administrator of the Federal Emergency Management Agency, said the federal government was ready to help in a huge way, focusing first on victims in Florida, which took the brunt of one of the strongest storms to make landfall in the United States. President Joe Biden and first lady Jill Biden plan to visit the state on Wednesday.

Flooded roadways and washed-out bridges to barrier islands left many people isolated amid limited cellphone service and a lack of basic amenities such as water, electricity and the internet. And officials warned that the situation in many areas isn’t expected to improve for several days because all of the rain that fell has nowhere to go since waterways are overflowing.

About 750,000 homes and businesses in Florida were still without electricity Sunday, down from a peak of 2.6 million.

Criswell told “Fox News Sunday” that the federal government, including the Coast Guard and Department of Defense, had moved into position “the largest amount of search and rescue assets that I think we’ve ever put in place before.” 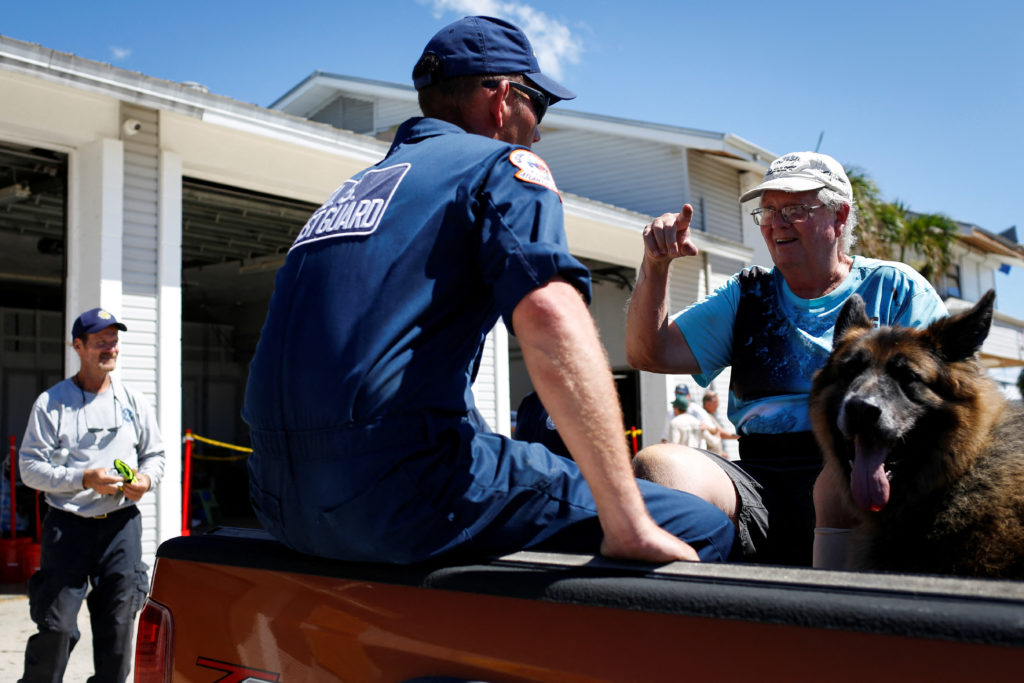 Andy Sherwood talks with a U.S. Coast Guard officer as he is being evacuated from the island with his dog after Hurricane Ian caused widespread destruction in Pine Island, Florida, Oct. 2, 2022. Photo by Marco Bello/Reuters

Still, recovery will take time, said Criswell, who visited the state Friday and Saturday to assess the damage and talk to survivors. She cautioned that dangers remain.

“We worry a lot about the direct impacts from the storm itself as it is making landfall, but we see so many more injuries and sometimes more fatalities after the storm,” Criswell said. “People need to stay vigilant right now. Standing water brings with it all kinds of hazards — it has debris, it could have power lines.”

At least 54 people have been confirmed dead: 47 in Florida, four in North Carolina and three in Cuba. The weakened storm drifted north Sunday and was expected to dump rain on parts of Virginia, West Virginia, Maryland and southern Pennsylvania, according to the National Hurricane Center, which warned of the potential for flash-flooding.

READ MORE: Death toll rises to 47 in Florida, 4 in North Carolina in wake of Hurricane Ian

More than 1,600 people have been rescued statewide, according to Florida’s emergency management agency.

Ben Bertat found 4 inches (10 centimeters) of water in his house by Lake Harney after kayaking there.

“I think it’s going to get worse because all of this water has to get to the lake” said Bertat, pointing to the water flooding a nearby road. “With ground saturation, all this swamp is full and it just can’t take any more water. It doesn’t look like it’s getting any lower.”

Gabriel Madling kayaked through several feet of water on his street, delivering sandbags to stave off water that had crept to his doorstep.

“My home is close to underwater,” Madling said. “Right now, I’m just going to sandbag as much as I can and hope and pray.”

The National Guard and the Coast Guard were flying in helicopters to Florida’s barrier islands to rescue people. On Sanibel Island, the lone bridge to the crescent-shaped island collapsed, cutting off access by car to the mainland for its 6,300 residents. 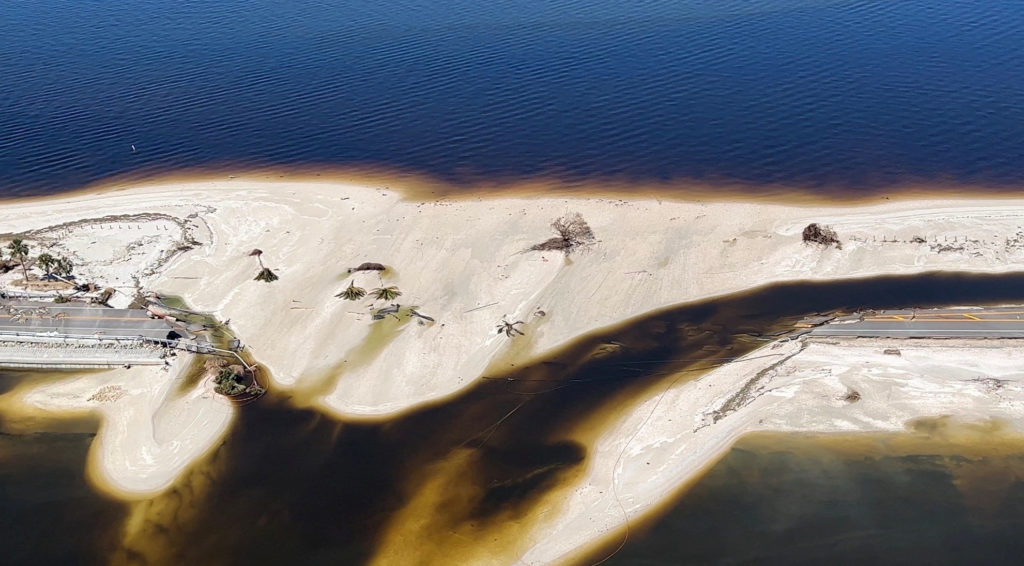 A destroyed portion of the causeway from Fort Myers to Sanibel Island is seen in this frame grab from video shot out of a U.S. Army National Guard Blackhawk helicopter as U.S. National Guard Bureau Chief General Daniel Hokanson tours the area by air after Hurricane Ian caused widespread destruction on Sanibel Island, Florida, Oct. 1, 2022. Photo by Kevin Fogarty/Reuters

An aerial photo of the Mad Hatter Restaurant on Sanibel that was posted on social media shows a mostly vacant patch of sand where the restaurant used to be. The staff is safe, according to a message on the restaurant’s Facebook page.

“The Mad Hatter Restaurant, unfortunately, is out at sea right now,” the Facebook page reads. “The best news from this devastating scene is that there is still land for us to rebuild.”

Fort Myers Mayor Kevin Anderson on Sunday defended Lee County officials from accusations that they had been slow in ordering evacuations Tuesday ahead of the storm, a day later than some other counties in the area did.

“Warnings for hurricane season start in June. So there’s a degree of personal responsibility here. I think the county acted appropriately. The thing is, a certain percentage of people will not heed the warnings regardless,” Anderson said on the CBS show “Face the Nation.”

Elsewhere, power remained knocked out to at least half of South Carolina’s Pawleys Island, a beach community roughly 75 miles (115 kilometers) up the coast from Charleston.

In North Carolina, the storm downed trees and power lines. Two of the four deaths in the state were from storm-related vehicle crashes, and the others involved a man who drowned when his truck plunged into a swamp and another killed by carbon monoxide poisoning from a generator in a garage.

Associated Press reporters Rebecca Santana in Ft. Myers, and Brendan Farrington and Anthony Izaguirre in Tallahassee; David Fischer in Miami; and Richard Lardner in Washington contributed to this report.

Floridians focus on recovery after Ian as death toll climbs