NEW ORLEANS – Norman Bouisse is wading through blackened water as thick muck fills his shrimp boots, looking for his baby brother’s casket. For years, the casket sat undisturbed in its plot in Adams Cemetery in the historic town of Jean Lafitte, but now the casket is one of dozens that was swept away by Hurricane Ida.

Nearly two weeks after the Category 4 storm, many tombs, coffins, and tombstones poke out of the debris like lost souls. The intensity of Ida shocked hurricane veterans in the town, a 200-year-old-fishing village located just a few miles from the Gulf of Mexico in the Barataria Basin. But not only was life disrupted for the living, several of the small town’s cemeteries — and others across the region — were damaged by a massive tidal surge.

“It’s a disaster to see it the way it is,” Bouisse, 74, told the PBS NewsHour moments after he received a call from a neighbor about a possible sighting of his brother’s displaced casket two miles away. “A friend of mine said he found a casket in his yard. Hopefully, it’s my brother.”

Nearly two weeks after Ida struck, it’s hard to say how many other cemeteries across the state face similar fates. The Louisiana Cemetery Response Task Force was formed in 2018 following massive Louisiana floods that washed away hundreds of caskets. Following Ida, agency officials say a survey by land and air is just getting underway.

Early assessments show damage to almost all of the 27 cemeteries in Ida’s path. Most had tombs displaced, like those at Bertrandville and Ironton Cemeteries in Plaquemines Parish. The team now will begin returning the displaced tombs and caskets to their resting place — a tedious, delicate practice. 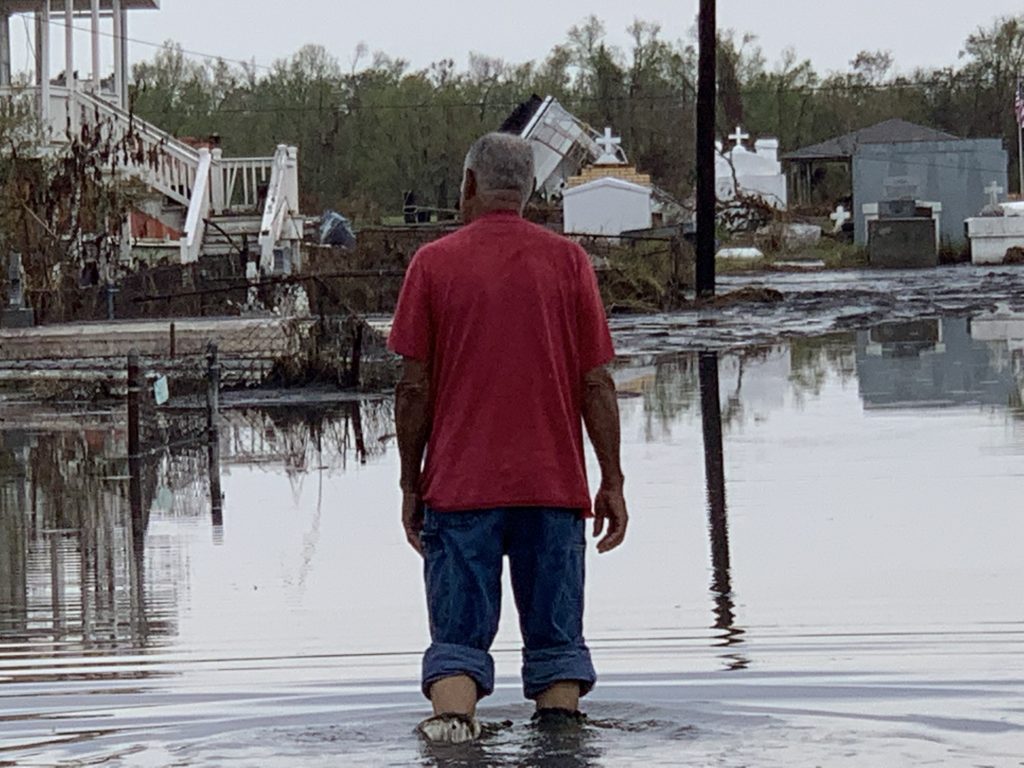 Norman Bouisse is one of many Louisiana residents whose loved ones’ burial sites were disturbed in the wake of Hurricane Ida. (Roby Chavez/PBS NewsHour)

Take a closer look, and you’ll find concrete graves — or tombs — with open tops, rusted-out broken caskets, and tombstones stuck in the mud in an upright position with caskets nearby. Slots in family mausoleums were blown open and sat empty while others have exposed caskets.

Some tombs ended up in yards, under splintered homes, or even buried in the mud with only an ornamental angel and cross rising out of the water. Many are blocks or miles from their final resting place.  “The floodwater lifts them out the ground. Look at that one,” Bouisse says, pointing to a concrete tomb. “It’s sitting on top of two other ones. It lifts them up, and they float. Whenever the water goes down, that’s where they stay.”

It can be a shocking sight for people to return to their communities and “come back to a casket in the yard,” said Ryan Seideman, chairman of the Louisiana Cemetery Response Task Force and chief of the lands and natural resources section at the state attorney general’s office. “It really is about serving the community and helping them get their loved ones back. It does mean a lot to them. It means a lot to me. It’s part of the healing process.”

Seideman, a trained anthropologist, is at work in Lake Charles, where reburials are continuing just more than a year after a similar scene unfolded in Hurricane Laura’s wake. The cemetery task force recovered 80 tombs and caskets after that 2020 storm, but only half have been positively identified and reburied. Some traveled for miles and were eventually found by hunters and utility linemen restoring power; others remain missing.

“It’s shocking when people go back to their communities after a hurricane, and they come back to a casket in the yard.”

“The water just hits those above-ground tombs, and the force of it is usually so hard that it picks them up in its path and pushes them. A lot of the tombs are concrete, but they’ll float. They are also just big pockets of air. Sometimes they’ll float long distances. They end up in the marsh, in people’s yards, or just anywhere until the water stops,” Seideman said.

Back in Lafitte, the storm has robbed many of the everlasting peace promised at burial. Still, residents like Norman Bouisse are determined to get everyone back to their final resting place, including his brother.

“It’s rough. It’s hard seeing something like this,” said Bouisse, who remains hopeful. “It would feel good to find him. That way, I know he’s back where he belongs. Hopefully, it’s him. If not, we’ll keep looking until we find him.”

That optimism isn’t always widespread after the storms clear.

In Cameron, Louisiana, Lerlene Rodrigue’s mother’s grave washed away in 2005 following Hurricane Rita and was found 11 months later, lodged in the mud some 45 miles away.

But her father’s casket is still missing, one of those that washed away after Hurricane Laura in August 2020.

“It’s brutal. I can’t make myself go there, knowing that he’s gone,” Rodrigue said. “I’m praying that I get a call saying they found him, but I’m not very hopeful right now.”

These days she returns to Creole Cemetery to an empty tomb that is only filled with muddy water. Its concrete cover still sits opened.

“I feel helpless because we don’t know where he is. You bury them once. It’s been a year and still nothing,” she said. “I can’t believe I’ll have to bury him a second time — that’s if we ever find him.”