MIAMI (AP) — Unsure of where Hurricane Dorian might strike, Florida residents watched the increasingly dire forecast with a sense of helplessness Thursday and braced for what could be the most powerful storm to hit the state’s east coast in nearly 30 years.

President Donald Trump warned it could be an “absolute monster.”

“All indications are it’s going to hit very hard and it’s going to be very big,” Trump said in a tweeted video, comparing Dorian to Hurricane Andrew, which obliterated thousands of homes south of Miami with winds topping 165 mph (266 kph) in 1992.

The National Hurricane Center said the Category 2 storm is expected to strengthen into a potentially catastrophic Category 4 with winds of almost 140 mph (225 kph) and slam into the U.S. on Tuesday — nearly 10 mph faster and a day later than previously forecast.

The hurricane center’s projected track showed the storm hitting near West Palm Beach. But predicting its course with any confidence this far out is so difficult that the “cone of uncertainty” on the map covered nearly all of Florida’s 500-mile (800-kilometer) coastline, with Miami, Fort Lauderdale and Orlando all within the danger zone.

Forecasters warned, too, that the storm’s slow movement could subject the state to a drawn-out pummeling from wind, storm surge and heavy rain.

“If it makes landfall as a Category 3 or 4 hurricane, that’s a big deal,” said University of Miami hurricane researcher Brian McNoldy. “A lot of people are going to be affected. A lot of insurance claims.”

With the storm’s track still unclear, no immediate mass evacuations were ordered. Along Florida’s east coast, local governments began distributing sandbags, shoppers rushed to stock up on food, plywood and other emergency supplies at supermarkets and hardware stores, and motorists topped off their tanks and filled gasoline cans. Some fuel shortages were reported in the Cape Canaveral area.

Josefine Larrauri, a retired translator, went to a Publix supermarket in Miami only to find empty shelves in the water section.

“I feel helpless because the whole coast is threatened,” she said. “What’s the use of going all the way to Georgia if it can land there?”

In Vero Beach, about 140 miles (225 kilometers) up the coast from Miami, Lauren Harvey, 51, scoured the aisles of a nearby supermarket in search for non-perishable foods that could last her throughout the storm.

Harvey, who works in medical billing, is going through a divorce and recently moved from the Philadelphia-area. She said she is not sure what to expect and is preparing to spend her very first hurricane alone.

“I just moved here, so I’m lost,” she said with a blank expression on her face, after grabbing a couple of water bottles from a scantily stocked shelf. “I don’t know what I’m going to do.” 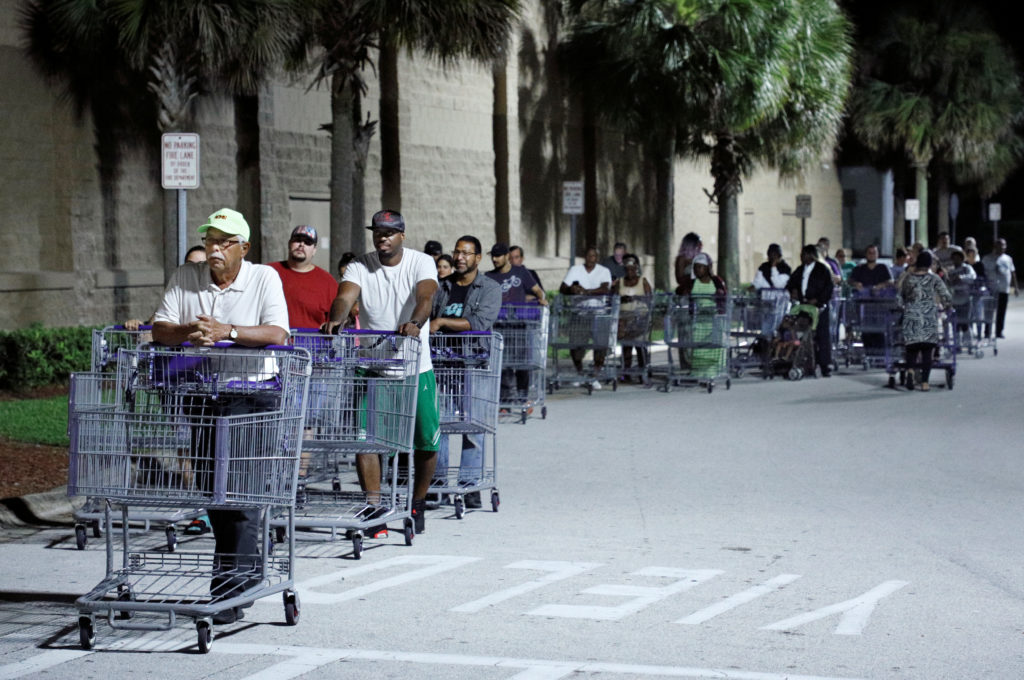 Shoppers wait in a long line for a Sam’s Club store to open before sunrise, as people rushed to buy supplies ahead of the arrival of Hurricane Dorian in Kissimmee, Florida, on August 29, 2019. Photo by Gregg Newton/Reuters

Feeding on the warm waters in the open ocean, Dorian steamed toward the U.S. after rolling through the Virgin Islands and Puerto Rico, where it inflicted less damage than feared but was blamed for at least one death.

As of Friday morning, Dorian was centered about 255 miles (410 kilometers) northeast of the Bahamas. Its winds had increased slightly to 110 mph (175 kph) and the storm was moving northwest at 12 mph (19 kph). Forecasters said it was expected to keep on strengthening and become a Category 3 later in the day.

Coastal areas in the Southeast could get 6 to 12 inches (15 to 30 centimeters) of rain, with 15 inches (38 centimeters) in some places, triggering life-threatening flash floods, the hurricane center said.

Also imperiled were the Bahamas, with Dorian’s expected track running just to the north of Great Abaco and Grand Bahama islands.

Jeff Byard, an associate administrator at the Federal Emergency Management Agency, warned that Dorian is likely to “create a lot of havoc with infrastructure, power and roads,” but gave assurances FEMA is prepared to handle it, even though the Trump administration is shifting hundreds of millions of dollars from FEMA and other agencies to deal with immigration at the Mexican border.

“This is going to be a big storm. We’re prepared for a big response,” Byard said.

Florida Gov. Ron DeSantis declared a state of emergency, clearing the way to bring in more fuel and call out the National Guard if necessary, and Georgia’s governor followed suit.

The hurricane season typically peaks between mid-August and late October. One of the most powerful storms ever to hit the U.S. was on Labor Day 1935. The unnamed Category 5 hurricane crashed ashore along Florida’s Gulf Coast on Sept. 2. It was blamed for over 400 deaths.