Forget peas — add crab and mango to your guacamole. Trust us.

After a week of debating contentious issues like gay marriage and the confederate flag, Americans have chosen a new topic to dispute: guacamole.

On Tuesday, the New York Times published a recipe that calls for adding green peas to the Mexican favorite. Within hours, social media exploded. Some said the recipe was delicious and should be given a chance, others locked ranks around traditional guacamole and decried the radical idea. Even the President weighed in. By the end of the day, the debate had made headlines.

In order to get some perspective on the issue, the PBS NewsHour did what we do best: consult an expert.

Oscar Serrano is the manager of Tequilas, an haute Mexican restaurant that’s been serving traditional cuisine in Philadelphia for 30 years. Serrano admits Tequilas often messes around with their guac. On the weekends they even have guacamole bars where customers can add fish, crab — even octopus — to their guacamole. But peas?

Serrano said he understands the urge to experiment with foods like guacamole — to add in different ingredients, to play around with the spices. He’s all in favor of that.

“That’s about one of the great things about guacamole,” he said. “You can make it your own. You know you want to put a little bacon in your guacamole, change it up a little bit, everyone will be like oh you’re a good chef. When you have the basic recipe you can twist it up a little bit and I think all those changes are good.”

“As long as you don’t change the basic guacamole,” he said. “So like instead of lime I’ll use lemon.”

But don’t get too crazy. “Guacamole without cilantro? That’s where I draw the line,” he said. “The basic recipe has to be there. You cannot substitute the basic ingredients for anything else” 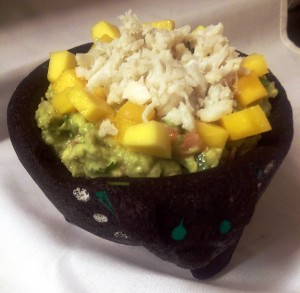 Courtesy of Tequilas in Philadelphia

Tequila’s Guacamole with Crab and Mango

Directions:
Mash avocado with a fork. Add in onion, tomato, cilantro, jalapeño and lime juice. Then, place crab meat and chopped mango on top for a healthy garnish.

Recipe courtesy of Tequila’s in Philly.

Left: Who knew people were so fierce when it came to dressing their fresh avocados. Photo by Getty Images