At Fort Lauderdale rally against gun violence, impassioned calls for change and anger at politicians

A loud, angry and clear call for change came from Fort Lauderdale on Saturday as survivors of a shooting at Marjory Stoneman Douglas High School, along with local leaders and community members, spoke to a rally of several hundred people.

As a crowd cheered her on, student and survivor Emma Gonzalez gave a scathing speech outside the federal courthouse that took lawmakers to task for receiving money from the National Rifle Association, a gun rights advocacy group that is one of the most influential lobbies in the country. She read a tweet by President Donald Trump in which he said the shooter was “mentally disturbed” and called for neighbors and classmates to “report such instances to authorities.”

“We did. Time and time again,” Gonzalez said, unwavering as she pushed tears off her face. “We need to pay attention to the fact that this isn’t just a mental health issue. He wouldn’t have harmed that many students with a knife.”

Gonzalez said if Trump, “wants to come up to me and tell me to my face that it was a terrible tragedy,” that she would ask him how much money he received from the National Rifle Association.

“The people in the government who were voted into power are lying to us,” she said. “They say that tougher gun laws do not decrease gun violence.”

Seventeen people died on Wednesday after a gunman pulled the school’s fire alarm and began shooting at students and staff. Nikolas Cruz, a 19-year-old who had attended the school and confessed to the shooting, has been charged with 17 counts of premeditated murder. He told investigators that he used an AR-15 rifle, which was designed to fire dozens of rounds in seconds for combat situations, and magazines that he carried in his backpack. It’s the same type of gun that was used to kill 58 at a concert in Las Vegas, 49 at a nightclub in Orlando, 26 a church in Texas and 26 at an elementary school in Newtown, Connecticut.

Reached by phone on Saturday, Gonzalez said that she wrote the speech this morning, incorporating into it what she had heard from her friends who were feeling symptoms of trauma. One friend, she said, has a window in her shower and crouched as she was taking one, fearful a shooter could be lurking outside.

With dozens of requests for interviews, Gonzalez said she welcomed the attention because it has helped her focus and communicate her feelings. Before the shooting on Wednesday, Gonzalez said she invested a lot of time into environmental issues, appalled by oil and manufacturing companies that exploit natural resources.

Then she said politicians are doing the “exact same thing.”

Trump visited Broward Health North Hospital, which had treated many of the shooting victims, on Friday, where he praised the first responders and doctors. 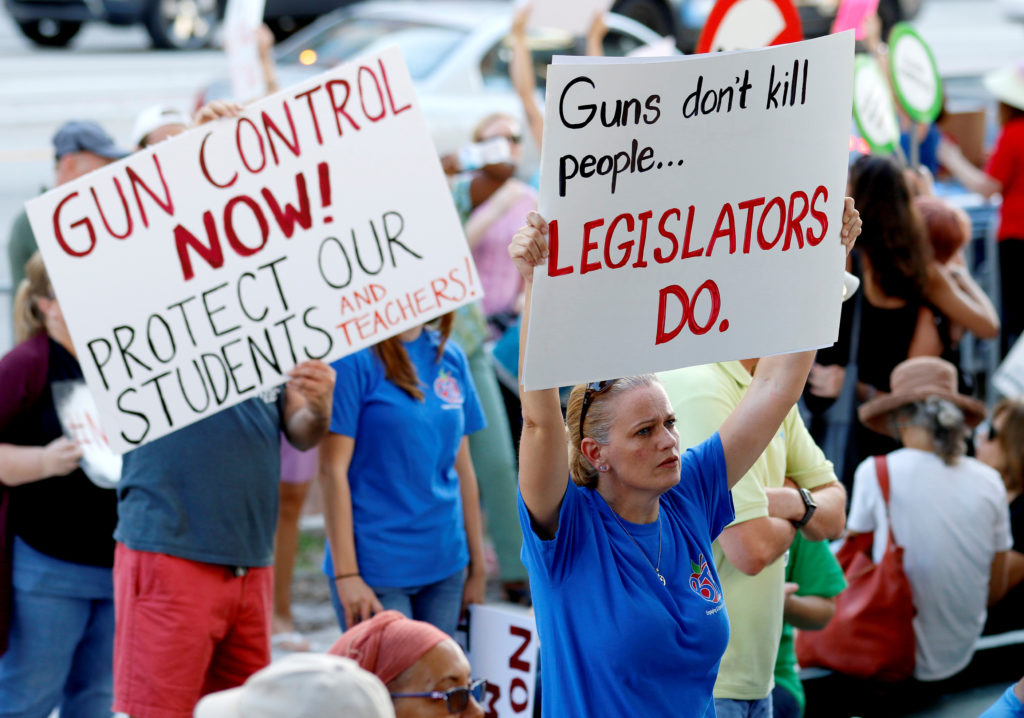 Stefanie Hartman of Coconut Creek, Florida, holds a sign during the March for Action on Gun Violence in Broward County in Fort Lauderdale, Florida, U.S., February 17, 2018. Photo by Joe Skipper/Reuters

At the rally, other students described the devastation of losing friends and community members, including the school’s athletic director and geography teacher.

“I’m a high school senior who is worried about which memorials to place flowers at,” Delaney Tarr, a student at Marjory Stoneman Douglas High School, told the rally. “My innocence, our innocence, has been taken from us. I’m 17, but in a matter of days, I have aged decades.”

It’s a message that rang out from other parents and community members this week as they mourned the victims and as students led an online call for tougher gun regulations, with survivors among its loudest voices. Many of them were born after the 1999 Columbine High School shooting, which killed 12 and ushered in an era of routine lockdown drills, followed by dozens more massacres. 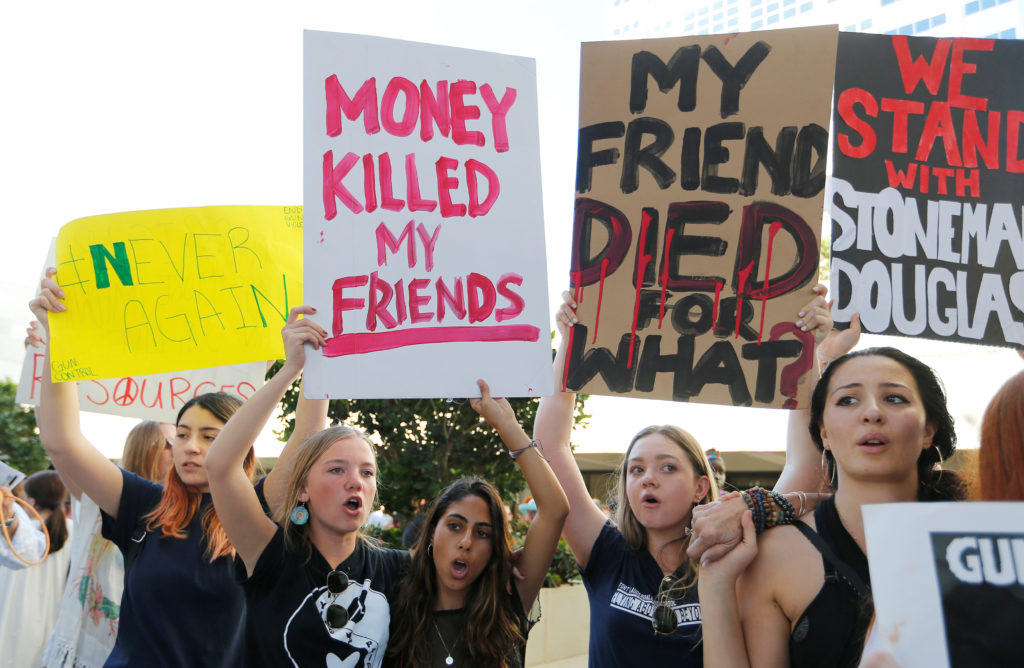 Demonstrators attend the March for Action on Gun Violence in Broward County at the U.S. Courthouse in Fort Lauderdale, Florida, U.S., February 17, 2018. Photo by Joe Skipper/Reuters

High school students and teachers are planning a walkout on April 20, the anniversary of the Columbine shooting, using the hashtag #NationalSchoolWalkout. The Women’s March is also organizing a school walkout on March 14, which will mark one month since the Parkland shooting.

In the days following the Stoneman Douglas shooting, students spoke out with force on Twitter, Facebook and other social platforms, calling for state and federal lawmakers to reform gun laws.

let it be known that cruz messed with the wrong school. We as students are using social media as a platform to have our voices heard. Let it be known that we are and will be in contact with our legislators & politicians. Change is now. & it is starting with the survivors.

For those in my mentions, telling me to shut up, telling me I don’t know what I’m talking about,& many other things. Know that I stand my ground, as a douglas student. A student who’s lost classmates, friends, & coaches. For the rest of my life, I will demand change. #neverforget

Mr. President, you can think this is "your" country, but Stoneman Douglas is MY school. And to be brutally honest, you don't deserve to step foot on that campus. Keep your condolences, they aren't needed here.

Speakers at the rally on Saturday echoed them.

“Let’s harness the energy in this rally and speak to the halls of Tallahassee in the three weeks they have left in session,” said Pamela Goodman, president of the League of Women Voters of Florida.

READ NEXT: Opinion: A student’s obituary should never say ‘gunned down while studying for chemistry’

Left: Protesters hold signs as they call for a reform of gun laws three days after the shooting at Marjory Stoneman Douglas High School, at a rally in Fort Lauderdale, Florida, U.S., February 17, 2018. Photo by Jonathan Drake/Reuters