In Mississippi, up to 3 inches (7.6 centimeters) of rain had already fallen in the Jackson area before dawn Sunday — and more was on the way. That prompted the National Weather Service to issue a flash flood warning for the city and some of its suburbs.

President Donald Trump asked people across the region to keep their guard up, saying on Twitter: “A big risk of major flooding in large parts of Louisiana and all across the Gulf Coast. Please be very careful!”

Forecasters warned of a continued threat of storm surge and heavy rains as the center of the storm slowly trudged inland and rain bands along its back half moved onshore. The U.S. National Hurricane Center said Sunday parts of south-central Louisiana could still have rainfall totals of up to 12 inches (30 centimeters), with isolated pockets of up to 20 inches (50 centimeters).

“This rainfall is expected to lead to dangerous, life-threatening flooding,” forecasters wrote in an advisory Sunday morning. 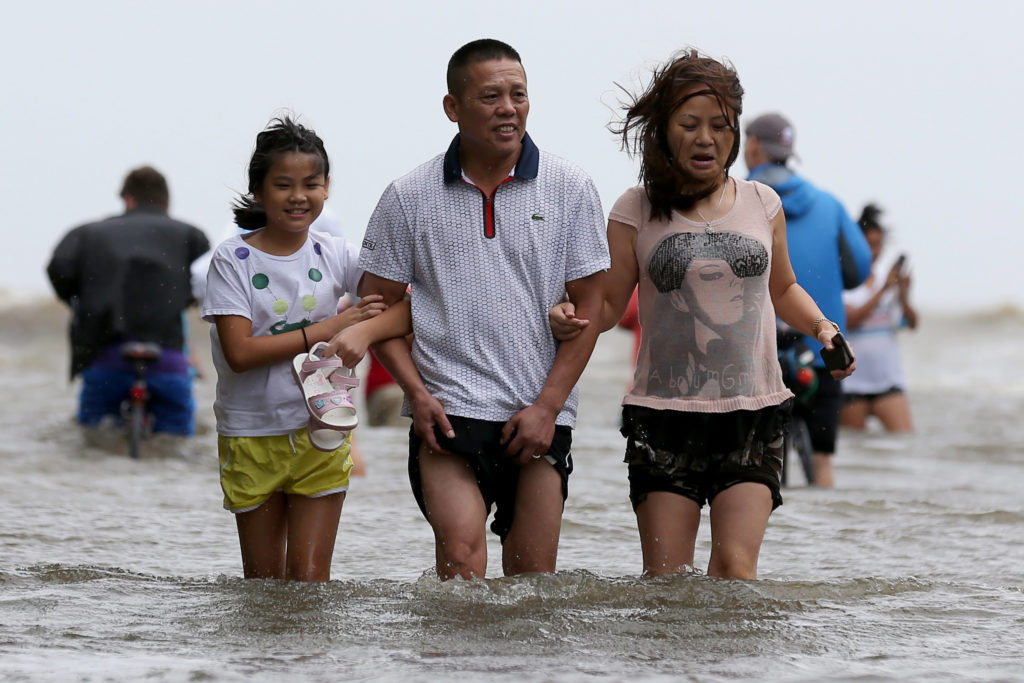 Still, the storm’s first wave had not inundated New Orleans as feared, with the city experiencing moderate rain Saturday. Forecasters downgraded rainfall estimates for the city through Sunday to between 2 to 4 inches (5 to 10 centimeters). Earlier forecasts of quadruple that amount had raised concerns that water pumps strengthened after Hurricane Katrina would be overwhelmed.

National Weather Service forecaster Robert Ricks cautioned, however, that it was too early to say for certain that New Orleans was in the clear. “We’re about at the (halfway) mark of the marathon right now,” he said Saturday evening.

Late Saturday night, authorities were trying to rescue a family of five who was trapped by high water in the south Louisiana town of Franklin, according to KTBS-TV . The National Guard had to halt its initial rescue mission because waters were too high to safely reach the family’s home. Franklin is about 40 miles (64 kilometers) southeast of Lafayette.

In other parts of Louisiana on Saturday, Barry flooded highways, forced people to scramble to rooftops and dumped heavy rain as it made landfall near Intracoastal City, about 160 miles (257 kilometers) west of New Orleans. Downpours also lashed coastal Alabama and Mississippi.

In Mandeville, a city on the north shore of Lake Pontchartrain across from New Orleans, storm surge and choppy waters sent waves pushing over the seawall and into nearby communities.

Water was covering Lisa Keiffer’s front yard and the road in front of her house Saturday. It wasn’t in danger of going in the house, but she was worried about her nearby business. She and her husband own a candy store featuring homemade fudge, jars filled with gummy bears and other candies. As the storm approached, they had scrambled to raise merchandise off the floor.

Elsewhere, Coast Guard helicopters rescued a dozen people and two pets from flooded areas of Terrebonne Parish, south of New Orleans, some of them from rooftops, a spokeswoman said.

None of the main levees on the Mississippi River failed or were breached, and they were expected to hold up through the storm, Gov. John Bel Edwards said. But a levee in Terrebonne Parish was overtopped by water for part of the day, officials said. Video also showed water getting over a second levee in Plaquemines Parish, where fingers of land extend deep into the Gulf of Mexico.

Many businesses were also shut down or closed early in Baton Rouge, and winds were strong enough to rock large pickup trucks. Ricks said forecasters also downgraded their rainfall estimates for Baton Rouge to between 6 and 10 inches (15 to 25 centimeters) through Sunday, with up to 15 inches (38 centimeters) in some spots.

Oil and gas operators evacuated hundreds of platforms and rigs in the Gulf of Mexico.

Barry was expected to continue weakening and become a tropical depression Sunday, moving over Arkansas on Sunday night and Monday. But forecasts showed the storm on a path toward Chicago that would swell the Mississippi River basin.