ODESSA, Texas — A life-long hunter decides to start carrying a handgun. A gun dealer calls for universal background checks. Yet another speaks out against “red flag laws” as ripe for abuse.

After a second Texas mass shooting in a single month, gun users from several Texas towns are showing just how nuanced people’s reactions can be.

Last month, Dustin Fawcett was sitting in his truck outside Starbucks in Odessa, his 3-week-old daughter strapped in the backseat, when shots rang out.

“What would I have done? …That’s when you think, well, the only answer to that would be a firearm.”

“We were just sitting there, jamming out to music, and all of a sudden, I hear a stream of gunshots, you know: bop-bop-bop.”

The gunman, who killed seven and wounded 25 more in Odessa and Midland on Aug. 31, was in the middle of his rampage, having just opened fire on several cars in the intersection directly behind Fawcett.

Both Fawcett, a transportation consultant for the county government, and his daughter were unharmed. But after witnessing a mass shooting, this life-long hunter is responding the same way that many others in Texas are — he’s going to carry a handgun for protection.

“I felt helpless. I had a little daughter in the back seat,” Fawcett said. “What would I have done? …That’s when you think, well, the only answer to that would be a firearm.”

At the Family Armory and Shooting Range in neighboring Midland, owner Tony Grijalva has seen a spike in people wanting to arm themselves. Grijalva said that during a normal September, he fills one class of 25 people who want to apply for a concealed carry firearm (CCF) permit. Since the mass shooting a few weeks ago, he’s got enough people to fill seven classes. “That’s a huge jump,” he said.

Grijalva said the inevitable gun-control debate that follows every mass shooting is often driven by “emotion and fear.” He said former Texas congressman and Democratic presidential candidate Beto O’Rourke’s recent call for a mandatory buyback of all assault-style weapons, including the AR-15, is irrational and won’t save lives.

“There’s hunting rifles that have magazines of the same capacity that could do just as much damage. And we don’t talk about those, or banning those,” he said. 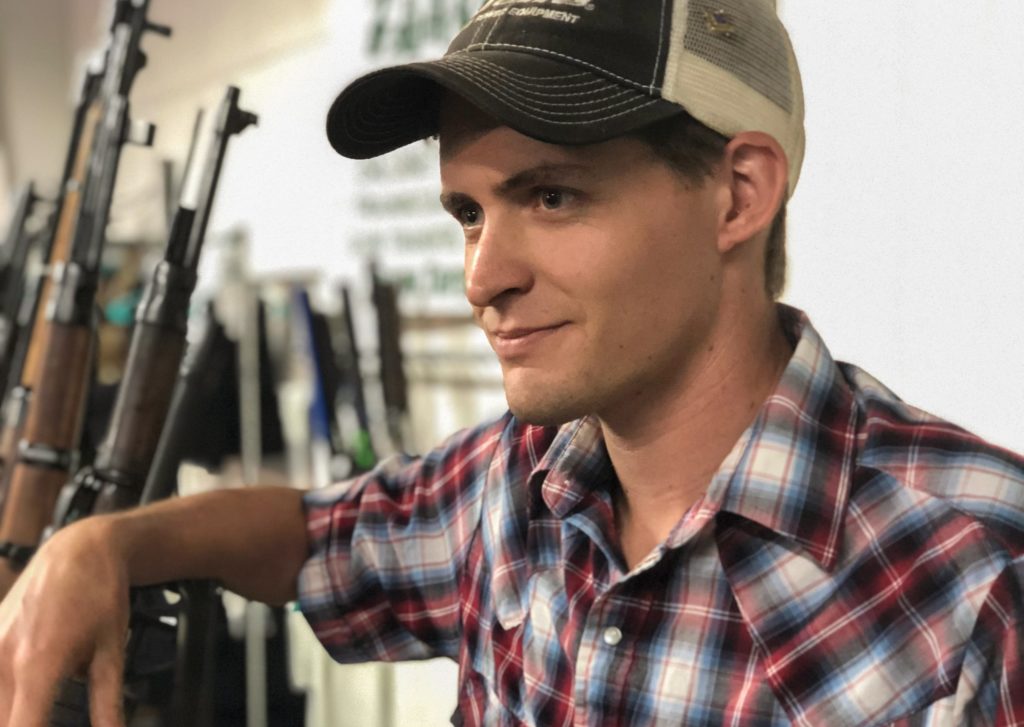 If lawmakers “want to control the number of guns that have been sold or the kind they sell, it’s too late. It’s far too late,” said Dylan Hammons, a 28-year-old who was selling guns, holsters, tactical gear and ammunition at a gun show in Hillsboro.

Hammons did suggest requiring people to prove, through a license, that they know how to use a gun safely before they can buy one — a reform that’s anathema to the National Rifle Association. The NRA argues gun licensing is an infringement on the Second Amendment, and would quickly turn into a national gun registry. But Hammons calls it a common-sense reform and one that doesn’t trample gun owners’ rights. He likens it to getting a driver’s license to prove you’re a safe driver.

“They want the privilege to own one of these,” he said, gesturing at the rack of rifles and shotguns behind him. “But yet they don’t want to prove that they’re responsible enough to know how to use it or store it how to keep it away from their kids?”

At the table across from Hammons, Karen and Gary Barlow were running a federal background check on a man who wanted to purchase a 9mm semi-automatic handgun. The Barlows own their own federally licensed gun store, so they’re required by law to run these checks, but because of the so-called “gun show loophole,” unlicensed gun sellers here and elsewhere don’t have the same requirement.

Instituting universal background checks for all gun purchases is one of the proposals passed by the House and awaiting action in the Senate, and Karen Barlow supports it. “I’d like that loophole closed,” she says. If you want to sell a gun to a neighbor or a relative, she said she thinks you shouldn’t need the check. But otherwise, she believes every gun buyer should undergo that scrutiny.

Following the massacre in El Paso, President Donald Trump seemed open to universal background checks, but later stepped back from those comments, reportedly after speaking with the head of the NRA. Senate Majority Leader Mitch McConnell has said he won’t bring any bill to the Senate floor that the president won’t support.

Many gun owners we spoke to said news media coverage focuses too much on mass shootings.

Wallace Dunn, vice president and director of the Texas Handgun Association and someone who trains people in gun self-defense, said national news media outlets stoke fear with endless, wall-to-wall coverage of massacres while paying far less attention to other homicides.

“The media ignores these shootings that occur every weekend in Chicago,” Dunn said. “You know the weekend that this [mass shooting] happened in Odessa? Look at the statistics of what happened in Chicago that weekend — I don’t know, but I would almost bet you $100 dollars right now that they killed more people in Chicago.” (According to local reports, seven people were killed in Chicago in a number of shootings over Labor Day weekend — the same number as died in Odessa.) 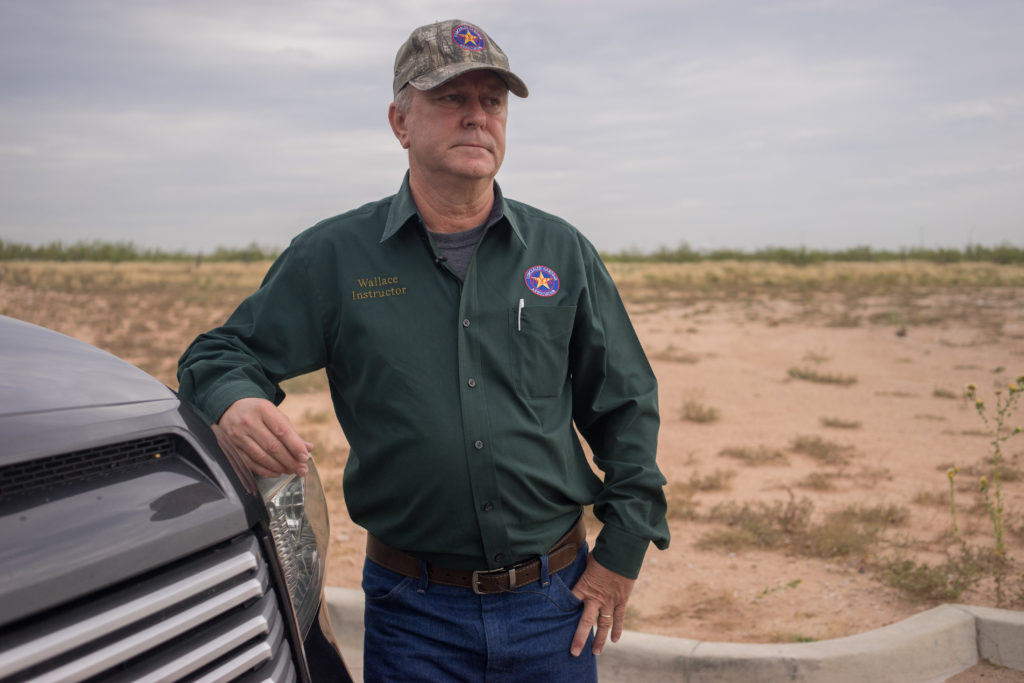 Wallace Dunn is a concealed carry instructor in Texas. Photo by William Brangham

Despite diverse reactions to the shootings, one sentiment that people shared with the PBS NewsHour again and again was opposition to so-called “red flag laws.” These laws, which vary from state to state, allow authorities to temporarily confiscate the guns of people who have been judged a potential threat to themselves or others. (A federal red flag law has passed a House committee and is awaiting a full vote.)

“The police come, and even though you’re 100 percent innocent, it’s up to you to prove your innocence, up to you to get back to your normal life.”

Paul D. Adams III, who works at a truck dealership and has a side business selling guns, said these laws are ripe for abuse. He voiced a common worry that people will file phony reports about gun-owners whom they don’t like.

“Someone makes a claim about you,” he said, “The police come, and even though you’re 100 percent innocent, it’s up to you to prove your innocence, up to you to get back to your normal life.”

In a recent poll by PBS NewsHour, NPR and Marist, 72 percent of Americans favored implementing a federal red flag law. The same number said they would support a required gun license to buy a gun, and 83 percent wanted background checks for private sales.

About 35 percent of Texans say they own guns, which is a few points higher than the national average. While gun owners here were open to some gun reforms, they said that anything that threatened what they see as their constitutionally guaranteed right to carry firearms for self-protection would be met with resistance.

Kate Grumke is a politics producer at PBS NewsHour.