Gwen’s Take: After Ferguson – What I Learned

We drove slowly by the Michael Brown memorial last weekend — a cluster of faded flowers and stuffed toys in the middle of a residential street in Ferguson, Missouri. A few, like me, paused to take pictures. Others just lingered at the curb and chatted, near another makeshift testament piled around a light pole.

Within a week, that second memorial had burned — a reminder that bad feelings still run close to the surface in this Missouri suburb that was the object of so much unrest and attention a little over a month ago.

When PBS first decided to come to Missouri to dig a bit beneath the surface, I have to admit I was a bit skeptical. Would anyone still be talking about Ferguson a month later? 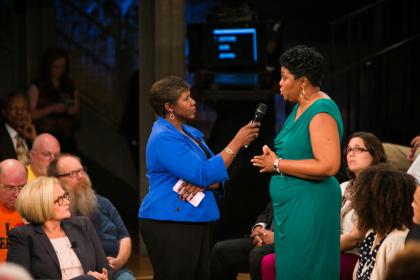 The Rev. Traci Blackmon speaks to Gwen Ifill during the taping of America After Ferguson. Photo by Nine Network/Jason Winkeler Photography

What I discovered at the town hall meeting that we taped at the University of Missouri at St. Louis — just a few miles away from Ferguson — is that we are still talking, because there is so much left unsaid.

We invited an audience of local residents, politicians, activists, writers and clergy. We expanded the invitees to include law enforcement officials from other cities. We asked them to talk to each other; not at each other. We implored them to listen.

And it worked. No one yelled. No one hooted. Sometimes there were heavy sighs and muted groans. But everyone listened — leaning in especially when they disagreed. (It went on for two hours. You can view some of the exchanges online.)

This seldom happens in discussions about race or justice or other tender issues. So it was a privilege to watch it unfold.

As it happens, I began and ended the conversation with a member of the clergy — providing a sort of invocation and benediction to the proceedings.

There are two Fergusons, she said. Others in the audience agreed. But it has also been clear that such a divide does not apply to Ferguson alone. There have been periodic explosions of discontent in American communities — from Los Angeles to Albuquerque to New York — for decades. In almost every case, a person of color — Rodney King, Eric Garner, John Crawford — has come into conflict with law enforcement. Sometimes they died.

But the debate never did. It’s just that we retreated into our corners and only talked about it with people who already agreed with us.
Our town hall meeting gave us a chance to get past that.

“It’s like riding a bicycle up a hill,” former Ferguson Mayor Brian Fletcher said. “And if you stop, you go backwards. Well, our hill just became a lot steeper, and that means we have to pedal even harder.”

One young woman spoke of seeing Michael Brown’s blood in the street. A young man said he would rather go to hell than get arrested by the local police.

And Ross Kaminsky, a self-described libertarian and radio talk show host who writes for the conservative American Spectator magazine, said he sometimes feels like he — a white man — is subject to racism because of the color of his own skin. “My parents weren’t here 400 years ago. My family arrived here way after the Civil War. We had nothing to do with it, and I think that a lot of people in the rest of America feel like we’re being blamed for things we didn’t cause.”

I found that nearly everyone feels they are “the rest of America,” the ones who get blamed when things go wrong. But there is no hope of bridging that divide unless we come out of our corners without insisting on guilt and blame.

I discovered this when I toured the country promoting my book about political breakthroughs in 2009. And I heard it again in St. Louis this week.

The benediction came from the Rev. Willis Johnson, pastor of Wellspring Church in Ferguson. “I’m believing if everybody dares to do what I’ve heard in this room, acknowledge that something has happened and something is wrong, really wrong, in this community and across the country — and affirm the personhood and significance of each and every one of us.”

Probably the single thing that cheered me most occurred after the cameras stopped rolling. As I was preparing to leave, I encountered three of our audience members — Ross Kaminsky, Rashad Robinson of Color of Change and Philip Agnew of Dream Defenders – walking out together. They were on their way to grab a drink and talk some more.

“Rashad, Phil and I agree politically on perhaps five percent of issues,” Kaminsky wrote later. “But speaking to them over drinks and burgers and fried ravioli was enlightening and, yes, fun.”

More proof that we can talk — and we can listen — if we only give each other a chance. I encourage you to watch America After Ferguson, including the online extras, and let us know what you think at #AfterFergusonPBS or email me at washingtonweek@pbs.org.  I’ll share what you say in this space next week.

Left: Gwen Ifill hosts a town hall meeting at the University of Missouri at St. Louis about the shooting of an unarmed black teenager in the town of Ferguson. Photo courtesy of WGBH