Last Tuesday, President Donald Trump issued full pardons to Dwight and Steven Hammond, father-and-son ranchers from Oregon who were convicted of intentionally setting fire to federal land two years ago. The decision brought an outpouring of celebration from anti-government extremists on the internet and across the country, and experts say it could embolden them to take further action.

Whereas a commutation would have meant their release from prison, a pardon brushes off the Hammonds’ conviction entirely and legitimizes the Bundys’ far-right movement.

The Hammonds became central to the debate over public lands in the West when their imprisonment inspired the now-infamous ranching family, the Bundys, and a cadre of anti-federal government militants to occupy the Malheur National Wildlife Refuge in January 2016.

Trump’s decision last week sends a strong message: by pardoning the Hammonds, he’s effectively saying no crime ever happened, according to Peter Walker, a professor at the University of Oregon. Whereas a commutation would have meant their release from prison, a pardon brushes off the Hammonds’ conviction entirely and legitimizes the Bundys’ far-right movement.

“They see this as yet another victory in their long fight against the goliath of government against the issue of public lands,” said Ryan Lenz, a senior investigative reporter at the Southern Poverty Law Center.

Who are the Hammonds?

Dwight Hammond, 76, and Steven Hammond, 49, were in a long-running and bitter conflict with the Bureau of Land Management and the U.S. Fish and Wildlife Service years before they committed arson, and decades before becoming a cause celebre of the far-right. They have a history of clashes with federal employees in eastern Oregon over how the refuge land should be managed. “I think people lose sight of the fact that federal public lands belong to all of us,” said Grace Wang, a professor at Western Washington University and public lands expert. Historically, the relationship between ranchers and the federal government in Harney County is mutually beneficial, not fraught and combative, she said.

For a long time, those at the Malheur refuge turned the other cheek, trying to diffuse the situation with the Hammonds peacefully through in-person meetings. Instead, the Hammonds turned increasingly violent, lobbing death threat after death threat toward workers at the refuge. According to a 1994 article from High Country News, officials at Malheur had compiled a substantive file detailing threats from 1986, 1988, and 1991.

Their aggressive actions were largely ignored by law enforcement until 2012, when they were convicted of setting fires on government land near their ranch in Harney County. The Hammonds say they started the fire to protect their property from wildfires and the spread of invasive plants, while prosecutors say they used the fire to cover up their illegal deer poaching. A federal judge sentenced both father, Dwight, and son, Steven, to relatively short sentences. But prosecutors appealed the decision, and the Hammonds were forced to return to jail to meet the five-year mandatory minimum sentence for arson cases in the state. 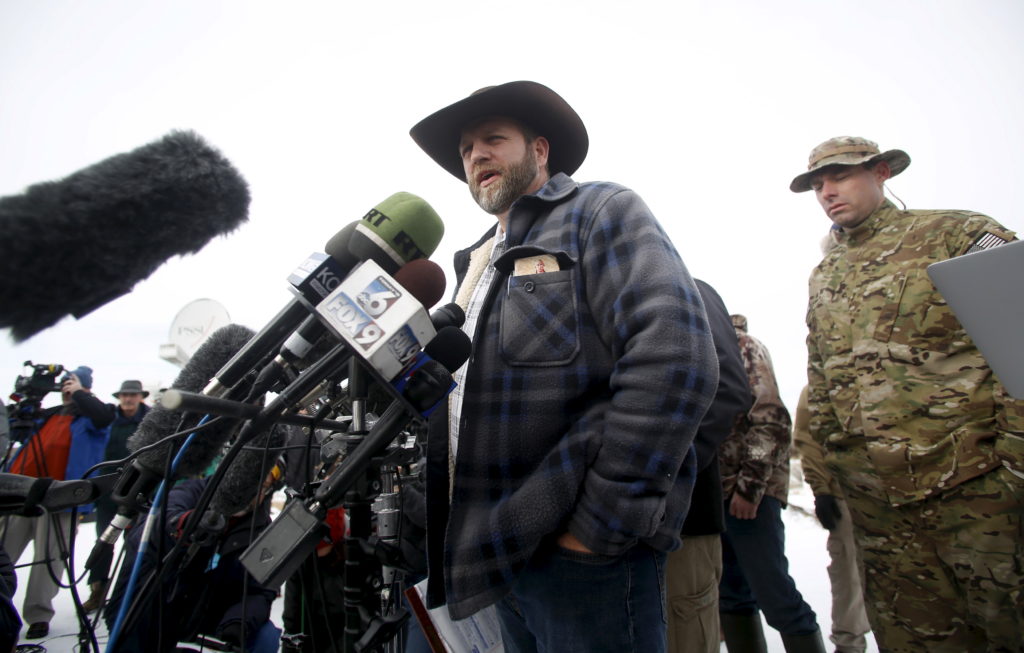 Though they didn’t support the Malheur occupation, the Hammonds’ imprisonment became a rallying cry for the Bundys and the far-right militia movement in 2016. The ranching family had received national attention two years prior when they and an armed militia held off the feds from rounding up cattle near Bunkerville, Nevada, where for decades, Cliven Bundy had illegally grazed on federal lands and refused to pay the associated fees. Led by Cliven’s sons, the heavily-armed occupation at the Malheur refuge lasted 41 days, despite the overwhelming disapproval of Harney County residents.

All three Bundys—Cliven, Ryan, and Ammon—were arrested after Malheur. They walked free this January after a jury acquitted the brothers in Oregon, and a judge declared a mistrial in Nevada.

The power of a pardon

Now, the Hammonds have come to symbolize a fringe ideology under the guise of grassroots action vis-à-vis the Bundys. “In the West, where the government owns great swaths of land, the enforcement of federal regulations has been a rallying cry for decades both in mainstream and extremist circles,” said Brian Levin, director of the Center for the Study of Hate and Extremism at California State University, San Bernardino.

Levin says the pardon is regarded “by anti-government extremists or bigots as both a get out of jail free card for future transgressions and an executive validation of their ideology.” It’s symbolic and sends a message to the anti-government movement that “the causes they fought so fervently for are just,” Lenz said. “Taken in total, the Hammonds are the capstone of a long series of failures to bring anyone to account for criminality regarding public lands and the defense thereof.”

Both Bunkerville and Malheur happened under President Barack Obama’s watch. Now, the people who led those occupations have allies in the White House, and their ideas are common talking points for politicians.

“The Hammonds are devoted family men, respected contributors to their local community, and have widespread support from their neighbors, local law enforcement, and farmers and ranchers across the West,” said White House spokeswoman Sarah Huckabee Sanders in a statement announcing the decision. 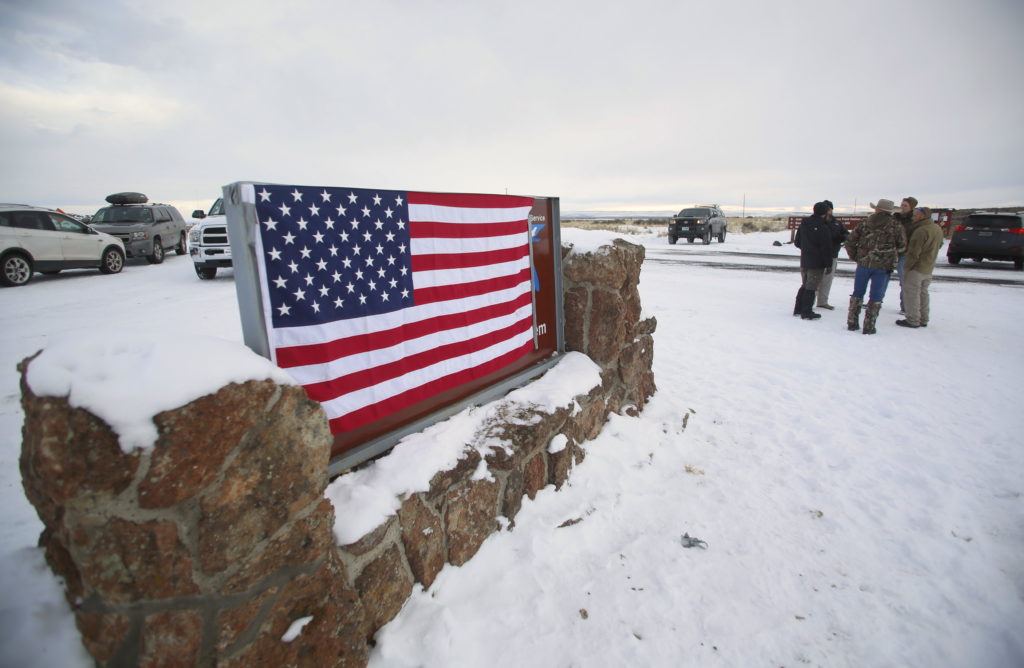 A U.S. flag covers a sign at the entrance of the Malheur National Wildlife Refuge near Burns, Oregon, U.S. January 3, 2016. Photo by Jim Urquhart/Reuters

So what comes next?

With the Hammond pardon, the ideas of Bundy and his supporters have been given the stamp of presidential approval. They brought their fight to the forefront of American consciousness four years ago, and so far they’ve won all their battles. “They want federal government to open up public lands, and that’s what federal government is beginning to do,” Lenz said. Take, for example, the decision by the Department of Interior to open up public lands in the West to energy companies.

According to Lenz, the movement will likely parlay their legal success—the Hammond pardon and Bundy acquittals—into political prominence. Ryan Bundy, Cliven’s eldest son, launched a gubernatorial bid in Nevada shortly after he was released in January.

Some experts, like Wang and Walker, think the pardon could embolden those who want another armed conflict. “Pardoning the Hammonds sends a really dangerous message to federal land workers,” Wang said. Rangers, law enforcement agents, and other employees—those who protect and educate people about public lands—are now at risk of being confronted by extremists, she said.

Trump’s pardon could encourage those who want to confront and harass federal employees, according to Walker. “It puts a target on the back on federal employees,” he said. “This declares open season [on them].”

Walker, whose book on the Malheur occupation comes out next month, spent much of January and February 2016 in Harney County, Oregon, where he observed the situation at the Malheur National Wildlife Refuge firsthand, interviewing local residents and observing the armed occupiers, who mostly came from out of town. He says that after failing to achieve what they wanted at Malheur, they are likely to launch another occupation in the future. According to Walker, it’s not a question of if, but when.

Left: Militiamen stand on a road at the Malheur National Wildlife Refuge near Burns, Oregon, January 4, 2016. Photo by Jim Urquhart/Reuters.