SPOKANE, Wash. — The eruption of a Hawaii volcano in the Pacific “Ring of Fire” has experts warily eyeing volcanic peaks on America’s West Coast that are also part of the geologically active region.

The West Coast is home to an 800-mile chain of 13 volcanoes, from Washington state’s Mount Baker to California’s Lassen Peak. They include Mount St. Helens, whose spectacular 1980 eruption in the Pacific Northwest killed dozens of people and sent volcanic ash across the country, and massive Mount Rainier, which towers above the Seattle metro area.

“There’s lots of anxiety out there,” said Liz Westby, geologist at the U.S. Geological Survey Cascades Volcano Observatory in Vancouver, Washington, in the shadow of Mount St. Helens. “They see destruction, and people get nervous.”

Kilauea, on Hawaii’s Big Island, is threatening to blow its top in coming days or weeks after sputtering lava for a week, forcing about 2,000 people to evacuate, destroying two dozen homes and threatening a geothermal plant. Experts fear the volcano could hurl ash and boulders the size of refrigerators miles into the air.

Here are some key things to know:

WHAT IS THE RING OF FIRE?

Roughly 450 volcanoes make up this horseshoe-shaped belt with Kilauea situated in the middle. The belt follows the coasts of South America, North America, eastern Asia, Australia and New Zealand. It’s known for frequent volcanic and seismic activity caused by the colliding of crustal plates.

America’s most dangerous volcanoes are all part of the Ring of Fire, and most are on the West Coast, according to the U.S. Geological Survey. Besides Kilauea, they include: Mount St. Helens and Mount Rainier in Washington; Mount Hood and South Sister in Oregon; and Mount Shasta and Lassen Volcanic Center in California.

Images of lava flowing from the ground and homes going up in flames in Hawaii have stoked unease among residents elsewhere along the Ring of Fire. But experts say an eruption on one section of the arc doesn’t necessarily signal danger in other parts.

“These are isolated systems,” Westby said. 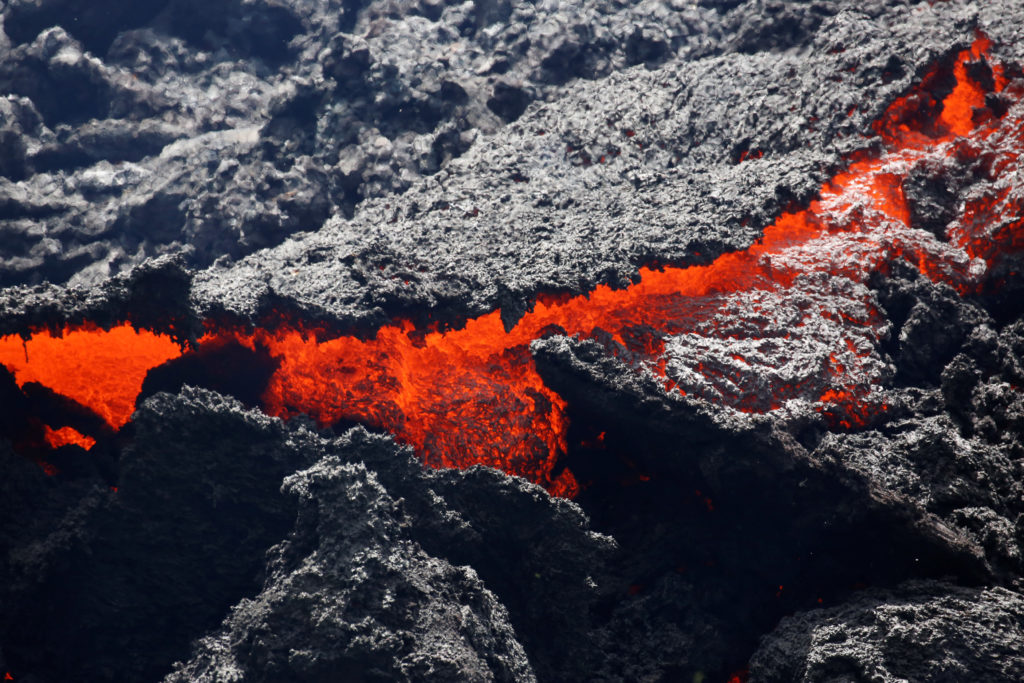 Lava erupts from a fissure east of the Leilani Estates subdivision during ongoing eruptions of the Kilauea Volcano in Hawaii, U.S., May 12, 2018. Photo by Terray Sylvester/Reuters 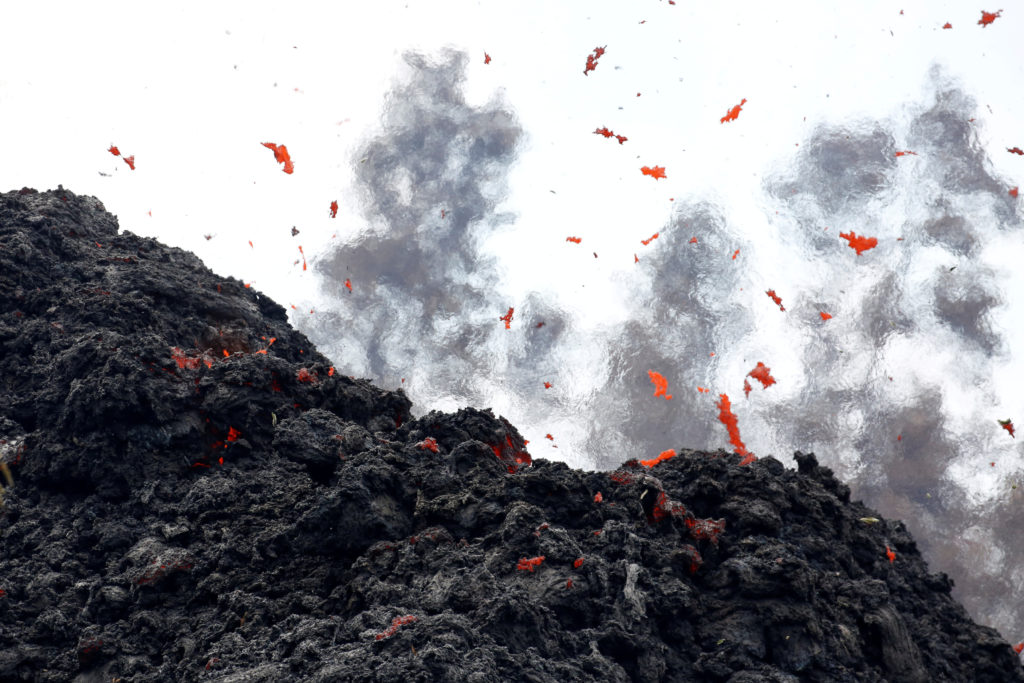 Lava erupts from a fissure east of the Leilani Estates subdivision during ongoing eruptions of the Kilauea Volcano in Hawaii, U.S., May 12, 2018. Photo by Terray Sylvester/Reuters

WHEN WILL THE WEST COAST VOLCANOES ERUPT?

But the situation can change fast.

“All our mountains are considered active and, geologically speaking, things seem to happen in the Northwest about every 100 years,” said John Ufford, preparedness manager for the Washington Emergency Management Division. “It’s an inexact timeline.”

Some geologists believe Mount St. Helens is the most likely to erupt.

But six other Cascade volcanoes have been active in the past 300 years, including steam eruptions at Mount Rainier and Glacier Peak and a 1915 blast at Lassen Peak that destroyed nearby ranches.

WHAT KIND OF DAMAGE COULD THEY DO?

The Big Island scenes of rivers of lava snaking through neighborhoods and sprouting fountains are unlikely in the Pacific Northwest.

“Lava is not the hazard, per se, like in Hawaii,” said Ian Lange, a retired University of Montana geology professor. Cascade volcanos produce a thicker, more viscous type of lava than Hawaiian volcanoes, so it doesn’t run as far, Lange said.

The Cascade volcanoes can produce huge clouds of choking ash and send deadly mudslides into rivers and streams. Two of the most potentially destructive are Mount St. Helens, north of the Portland, Oregon, metro area, and 14,000-foot (4,270-meter) Mount Rainier, which is visible from the cities of Seattle and Tacoma.

Mount Rainier eruptions in the distant past have caused destruction as far west as Puget Sound, some 50 miles (80 kilometers) away.

The volcano hasn’t produced a significant eruption in the past 500 years. But it remains dangerous because of its great height, frequent earthquakes, active hydrothermal system, and 26 glaciers, experts said.

Another major danger from a Cascade volcano eruption would be large amounts of ash thrown into the air, where it could foul aircraft engines.

READ NEXT: Photos: Why did the Kilauea volcano make a pink plume?

WHAT ARE COMMUNITIES DOING TO PREPARE?

The closest settlement to a West Coast volcano may be Government Camp, on Oregon’s Mount Hood. Lava could conceivably reach the town, but the greater threat is an eruption triggering a so-called pyroclastic flow, which is a fast-moving cloud of hot ash and gas, experts said.

But Lange believes California’s Mount Shasta is the most dangerous, in part because it is surrounded by towns.

The town of Mt. Shasta has numerous response plans for emergencies, including a volcano eruption, Police Chief Parish Cross said. But the plan for a volcano is pretty fluid, he said.

“We don’t know the size or scope of the event,” Cross said, including which direction the eruption would occur.

This is not an issue in Orting, Washington, about 20 miles (32 kilometers) west of Mount Rainier. Orting would be directly in the path of a lahar, and local officials each year conduct drills in which children move from school to higher ground to escape the flow.

Students usually take about 45 minutes to walk the 2 miles (3 kilometers) to higher ground, which should be fast enough to escape, officials said.

“Our concern is ice and snow melting rapidly on Mount Rainier,” said Chuck Morrison, a resident of the town of 7,600 who has long been involved in evacuation planning. “We need a quick way off the valley floor.”

Orting is the town most vulnerable to lahar damage from Mount Rainier, according to the U.S. Geological Survey.

Scientists say that in the worst case, a 30-foot-high (9-meter-high) lahar with the consistency of wet concrete could rumble through Orting at 50 mph (80 kph) if volcanic activity suddenly melted snow and ice on Rainier.

Left: Lava erupts from a fissure east of the Leilani Estates subdivision during ongoing eruptions of the Kilauea Volcano in Hawaii, U.S., May 12, 2018. Photo by Terray Sylvester/Reuters