Today, we celebrate the 154th birthday of Elizabeth Cochrane Seaman. Better known by her nom de plume Nellie Bly (taken–and misspelled–from the title of a Stephen Foster tune, “Nelly Bly”), she was the pioneering, if not the very first, American investigative journalist.

Bly was born in Cochran’s Mills, Pennsylvania, just outside of Pittsburgh. In 1889, she made a famous, widely reported and intrepid 72-day trip around the globe. It was the fastest journey of her era and one that shattered the fictional record of Jules Verne’s wanderer, Phineas Fogg, in his novel “Around the World in 80 Days.”

Medical historians and patient advocates, however, rightly revere Bly for her infamous exposé of the New York City Lunatic Asylum on Blackwell’s (now Roosevelt) Island in the East River.

First reported in October 1887 on the pages of Joseph Pulitzer’s flagship newspaper, the New York World, Bly subsequently published her daring dispatches as a book, “Ten Days in a Mad-House.” It is a slim volume that remains a classic in the annals of psychiatry and a cogent warning against inhumane treatment of the mentally ill. It proved so embarrassing to the city aldermen that they appropriated an extra “$1,000,000 per annum” to correct many of the abuses Bly exposed. 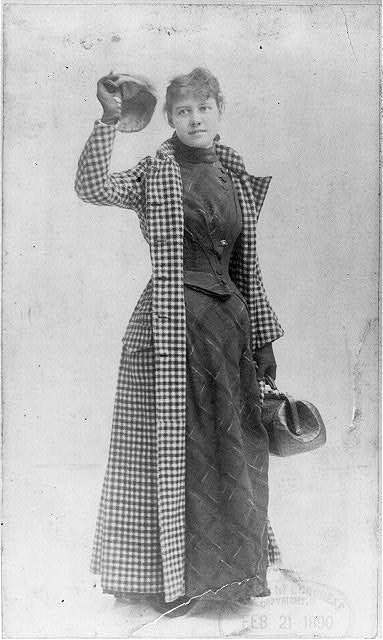 After Nellie Bly’s investigation was published, a grand jury was impaneled to investigate the abuses and poor treatments she uncovered at the asylum. Photo via Library of Congress/Wikimedia Commons

The fascinating question to answer, of course, is how did she do it?

Bly began her journalistic career in 1880 at the age of 16, writing “women’s columns” on home, hearth, gardening, society and childrearing for the Pittsburgh Dispatch. Soon enough, she convinced her editor to investigate such vanguard topics as how divorce affected women. Too impatient to be restricted only to domestic matters, she spent six months in Mexico as a special correspondent. Soon after her return, she flew the constraining coop of Pittsburgh, leaving behind a note, “I am off for New York. Look out for me. —Bly”

After talking her way into the city room of the New York World, she impressed the editors there enough to leave with a plum assignment: “I was asked by the World if I could have myself committed to one of the asylums for the insane in New York, with a view to writing a plain and unvarnished narrative of the treatment of the patients therein.”

Getting committed proved rather easy, even if neither Bly nor her editors had a clear plan of getting her released once the story was filed. She took a room at a cheap boarding house, “Temporary Home for Females, No. 84 Second Avenue,” under the name Bly Brown and began questioning and imitating the women who seemed most insane to her. Soon enough, it was Bly who was deemed crazy. The matron of the house enlisted a few cops to escort Bly to the Essex Market Police Courtroom, where an impatient judge named Duffy pronounced her insane and ordered her to the famed insane ward at Bellevue Hospital, the city’s largest charitable hospital. A few days later, she boarded a ferry boat filled stem to stern with unwashed and uncomprehending women for Blackwell’s Island, “an insane place,” one ambulance driver told her, “where you’ll never get out of.”

Taking careful notes of both her own experiences and those of her fellow inmates, Bly painted a dire picture in which 16 doctors were assigned to the care of some 1,600 inmates. “Excepting two,” she recorded, “I have never seen them pay any attention to the patients.” She also questioned the judge’s ability to pronounce a woman insane “by merely bidding her good morning and refusing to hear her pleas of release? Even the sick ones know it is useless to say anything for the answer will be that it is their imagination.” She also reported on the cultural insensitivity and language barriers experienced by immigrant women who spoke little or no English and a host of hostile and abusive treatments, from mandatory cold baths to confinement in small, damp, vermin-infested, locked rooms.

After a few days on Blackwell’s Island, Bly dropped her act of “acting crazy” and tried to present herself in a more fit mental state. Such efforts were all for naught until the New York World sent an attorney to arrange for her release. Two days later, on Sunday, Oct. 9, 1887, the World ran the first installment of her story, titled “Behind Asylum Bars,” and Bly became an overnight sensation. The psychiatrists who had erroneously diagnosed her as insane offered profuse apologies, even as the remaining stories were widely syndicated across the nation.

Not only did the New York City municipal government appropriate more money to the care of the mentally ill on Blackwell’s Island, a grand jury was impaneled to investigate the abuses and poor treatments Bly uncovered at the asylum. Approximately one month after her articles ran in print, many of the most glaring problems she reported had improved: better living and sanitary conditions were instituted, more nourishing meals were provided, translators were hired for the foreign born who were not necessarily mentally ill but simply could not understand their keepers, and the most abusive nurses and physicians were fired and replaced.

Bly sailed from one journalistic triumph to the next, including her whirlwind trip around the world in 72 days in 1889 (a journey she primarily made while traveling by herself rather than with a chaperone), a series of dispatches from the Eastern Front during World War I, and reports on the women’s suffrage movement. In 1895, at age 31, she married the 73-year-old millionaire Robert Seaman, who ran the Iron Clad Manufacturing Company, which made steel milk cans, stacking garbage cans and boilers. Due to her husband’s failing health (he died in 1904), she retired from journalism and took over the reins of the company.

Bly died of pneumonia at the age of 57 in 1922. One can only speculate what further triumphs and good deeds this remarkable woman might have achieved if only she lived a few years longer.

At the very least, she helped change the plights of the mentally ill in America–an issue, sadly, that still requires attention to this very day.