“Today, St. Louis is taking decisive action, showing our state — and our entire country — we will not stop fighting to protect access to reproductive health care,” Jones said. “The Reproductive Equity Fund will empower St. Louisans to make the best health care decisions for themselves and their communities, while addressing the disparities exacerbated by the COVID-19 crisis.”

READ MORE: Inside a Memphis clinic during its final days of abortion care

“My Office today filed suit to put a stop to Mayor Jones and the City of St. Louis Board of Aldermen’s blatantly illegal move to spend Missourians’ hard-earned tax dollars on out-of-state abortions,” Schmitt said.

Missouri banned nearly all abortions, including in cases of rape or incest, on the same day as the Supreme Court decision overturning Roe v. Wade. Some Missourians protested, some celebrated and others shifted their focus to how to help people seeking reproductive health care in a state where inducing one could be prosecuted as a class B felony.

That day, June 24, St. Louis Alderwoman Annie Rice also introduced her bill to use American Rescue Plan Act funds to launch a Reproductive Equity Fund in St. Louis, a move she said was a larger and “long-time effort that has been in the works” well before the fall of Roe.

“Abortion has been nearly inaccessible in Missouri for a very long time now and we’ve pretty much only had medication abortions provided at the St. Louis clinic and that was the last abortion clinic standing in the state,” she told the PBS NewsHour.

That clinic, a Planned Parenthood on St. Louis’ Central West End, performed its last abortion the week before the Supreme Court released the Dobbs decision. 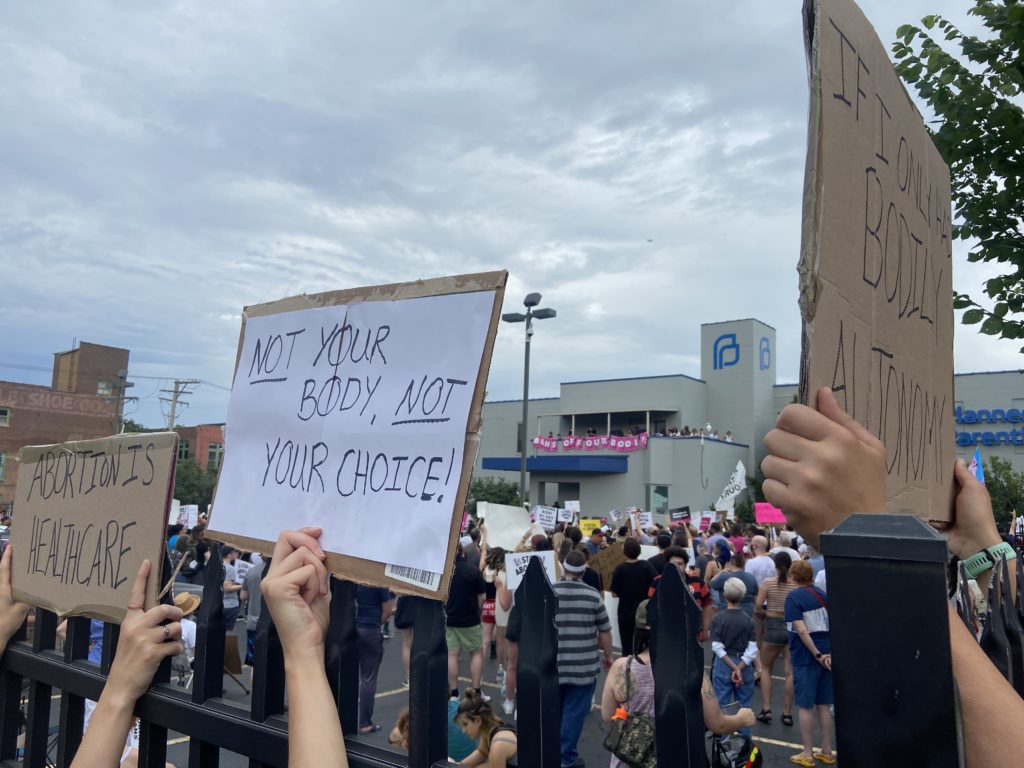 The Planned Parenthood in St. Louis’ Central Wet End was the last place where abortion was accessible before the fall of Roe. Photo by Gabrielle Hays/PBS NewsHour

Since the procedure cannot be performed in Missouri, the new fund will direct $1 million of ARPA money toward logistical support for people seeking abortions, though the St. Louis City Health Department still needs to come up with a process for allocation. Another $500,000 will go to increasing accessibility for other reproductive services such as doulas – who help pregnant people through labor, delivery and postpartum recovery – and lactation support, that may help prevent maternal mortality or encourage successful breastfeeding. An additional $250,000 will be dedicated to evaluate and support the whole process. In total, the bill sets aside $1.75 million in federal coronavirus funds. It also sets aside another $1.6 million in funding for COVID-19 testing and vaccine incentives.

“We don’t have the same restrictions on the ARPA money that there is on other federal funding or on state funding, so why don’t we use this to try to get people the health care that they need?” she said.

Federal law prohibits federal dollars from being used to directly fund abortions, which the bill acknowledges.

However, the bill Rice introduced specifies that the $1 million should be used to help people with access by helping solely with logistical needs such as child care and transportation.

Nevertheless, the proposal saw some pushback from the moment it was introduced. In early July, Missouri Attorney General Eric Schmitt released a statement saying that “using hard-earned taxpayer dollars, whether it be ARPA funds or other forms of revenue, to fund abortions is plainly illegal under Missouri law. St. Louis City and County, and Kansas City, and any others who attempt to authorize taxpayer-funded abortions will be met with a lawsuit from the Missouri Attorney General’s Office.”

Rice told the NewsHour that the board “thinks that the federal money that we are using can’t be restricted in the way that the attorney general thinks.”

The idea for the bill started with Pro-choice Missouri’s outreach work to learn more about barriers faced by people who can get pregnant, Rice said.

“Board Bill 61, I’m proud to say, was created by local birth workers and pregnant and parenting St. Louisans, who are empowered to advocate for what our community needs and deserves,” said Dr. Love Holt, a reproductive freedom organizer with Pro-Choice Missouri, in a press release the day the bill was signed. “When I think of the countless conversations I’ve had with people harmed by lack of access to abortions, and barriers to pregnancy care within the COVID-19 pandemic, I know this bill will have a direct and meaningful impact.” 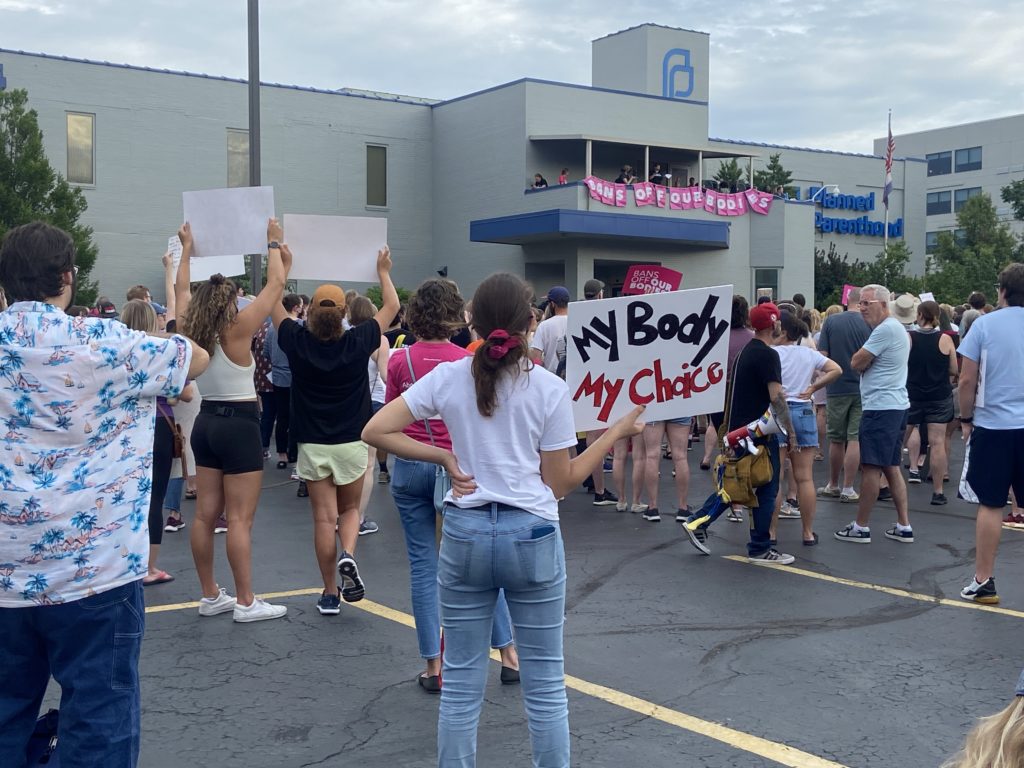 Demonstrators gather outside of Missouri’s last abortion clinic hours after the SCOTUS decision to overturn Roe is released. Photo by Gabrielle Hays/PBS NewsHour.

Ensuring there is money available for support in states where abortion is now illegal is extremely important according to Megan Jeyifo, executive director of the Chicago Abortion Fund.For her and her team, the last two weeks have been “very busy, very exhausting.”

On the Friday after Roe fell, she said she sent her entire staff flowers.

“It affected us and coming face to face with all of the systems that are in place to stop someone from getting an abortion is really painful,” Jeyifo said.

Many people are turning to various reproductive health care organizations in Illinois for help with finding safe access to abortion. The Chicago Abortion Fund, which is funded by donations from both grassroots efforts and foundations, has been inundated with requests in the weeks since Roe’s overturn.

Outside of its direct services, the fund also engages in research and advocacy work, efforts that have picked up in the last few weeks. On average, they field 500 calls a month.

“The work is not new by any means, the scale is new and the costs are rising, you know, especially as it pertains to having to support more people traveling,” she said.

Though each person and their needs are different, Jeyifo said a person seeking an abortion in another state “can easily spend $1,500” so they work to help the meet those needs, whatever they may be.“We don’t have any means of testing or eligibility requirements, we support people with what they say they need,” she said.

In the first three months of 2022, more than 80 percent of the fund’s callers came from outside Illinois. It is for all of these reasons that funding resources, such as local abortion funds or local government efforts, matter, Jeyifo said.

In Missouri, where abortion is effectively banned, except for cases where the person’s life is at risk, inducing an abortion can count as a Class B felony. People charged with a felony at this level can face a prison sentence of five to 15 years – a barrier, Jeyifo said, is harmful and will only lead to more bad outcomes.

In recent months, several prosecutors across the country have vowed to not prosecute an individual seeking an abortion, including St. Louis County Prosecuting Attorney Wesley Bell, a democrat, who signed a joint letter that ends with: “Criminalizing and prosecuting individuals who seek or provide abortion care makes a mockery of justice; prosecutors should not be part of that.”

Though the last clinic to perform abortions in Missouri can no longer perform those services, Dr. Colleen McNicholas, chief medical officer for the Reproductive Health Services of Planned Parenthood of the St. Louis Region, said the building will remain open to ensure that people still have access to its other services.

“It’s great to see smaller local governments and elected officials doing the work that the state level hasn’t done whether that’s St. Louis City and Mayor Jones or the county that has also said that it would put dollars behind this work,” she said. “Basic access to healthcare has to involve everybody.”