PANAMA CITY, Fla. — The third-most powerful hurricane to hit the U.S. mainland in recorded history left a wide path of destruction across Florida and Georgia, destroying homes and shopping centers and felling trees that killed at least two people. And it’s not done yet. 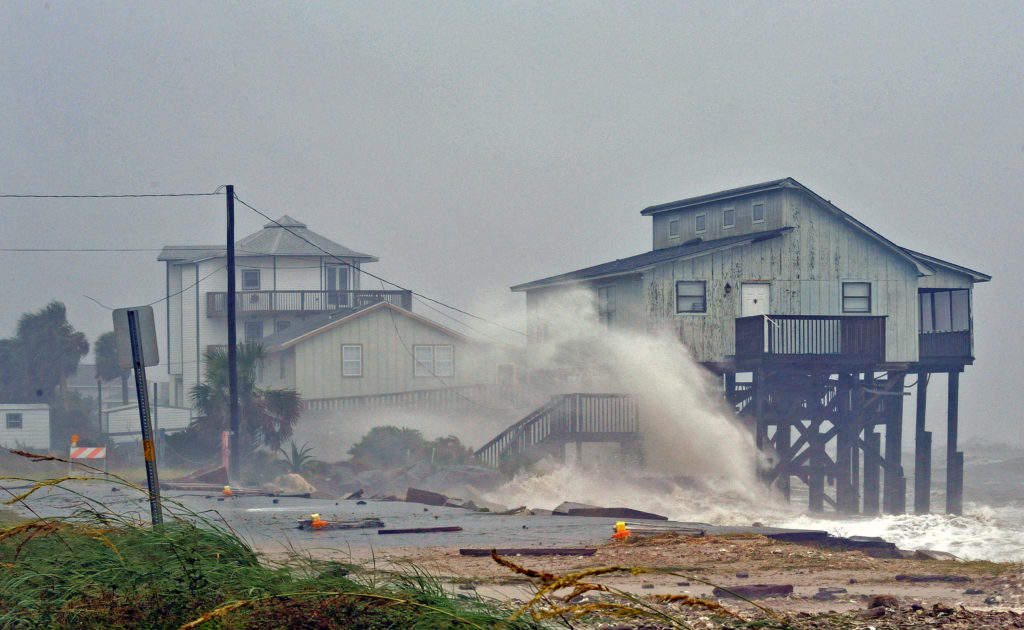 Waves crash on stilt houses along the shore due to Hurricane Michael at Alligator Point in Franklin County, Florida. Photo by Steve Nesius/Reuters

It will take some time for residents of north Florida to take stock of the enormity of the disaster. Reaching the worst-hit areas wasn’t easy. The Florida Highway Patrol closed 80 miles of Interstate 10, the main east-west route along Florida’s Panhandle, to clear debris.

Many homes were ripped apart or washed away altogether in Mexico Beach, a town of 1,000 where the hurricane made landfall and the storm surge pushed lead-grey water up to the rooftops. Authorities said falling trees killed a man outside Tallahassee, Florida, and an 11-year-old girl in southwest Georgia.

An Associated Press team drove for miles and encountered extensive destruction around Panama City, just west of where the center of Michael’s eye hit the shore. Although most homes were still standing, no property was left undamaged. Downed power lines lay nearly everywhere. Roofs were peeled away and sent airborne. Aluminum siding was shredded to ribbons. Homes were split open by fallen trees. Hundreds of cars had broken windows, many turned askew by the wind. Twisted street signs lay on the ground. Pine trees were stripped into stalks and snapped off about 20 feet high.

More than 780,000 homes and businesses were without power Thursday in the wake of the storm. 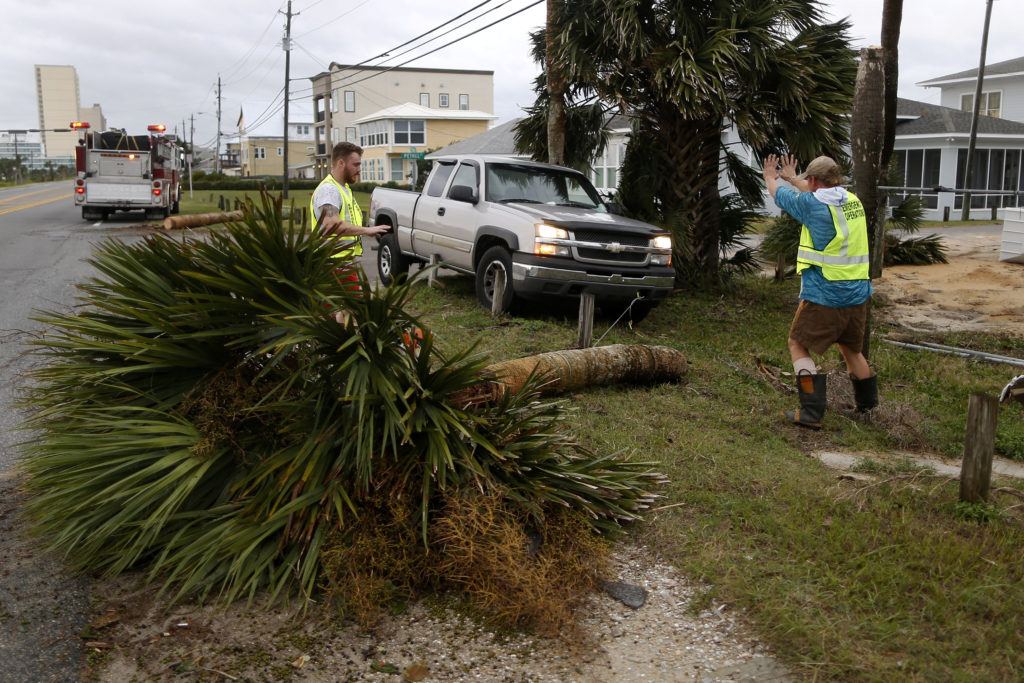 Families tentatively emerged from darkened shelters and hotels to this unfamiliar and perilous landscape, under a perfectly clear blue sky, to the sounds of a Coast Guard helicopter hovering over damaged neighborhoods, beeping security alarms and the occasional sirens of police and fire department vehicles.

Vance Beu, 29, was staying with his mother at her home, Spring Gate Apartments, a complex of single-story wood frame buildings where they piled up mattresses around themselves for protection. A pine tree punched a hole in their roof and his ears even popped when the barometric pressure went lower. The roar of the winds, he said, sounded like a jet engine.

“It was terrifying, honestly. There was a lot of noise. We thought the windows were going to break at any time,” Beu said.

Sally Crown rode out Michael on the Florida Panhandle thinking at first that the worst damage was the many trees downed in her yard. But after the storm passed, she emerged to check on the cafe she manages and discovered a scene of breathtaking destruction.

“It’s absolutely horrendous. Catastrophic,” Crown said. “There’s flooding. Boats on the highway. A house on the highway. Houses that have been there forever are just shattered.” 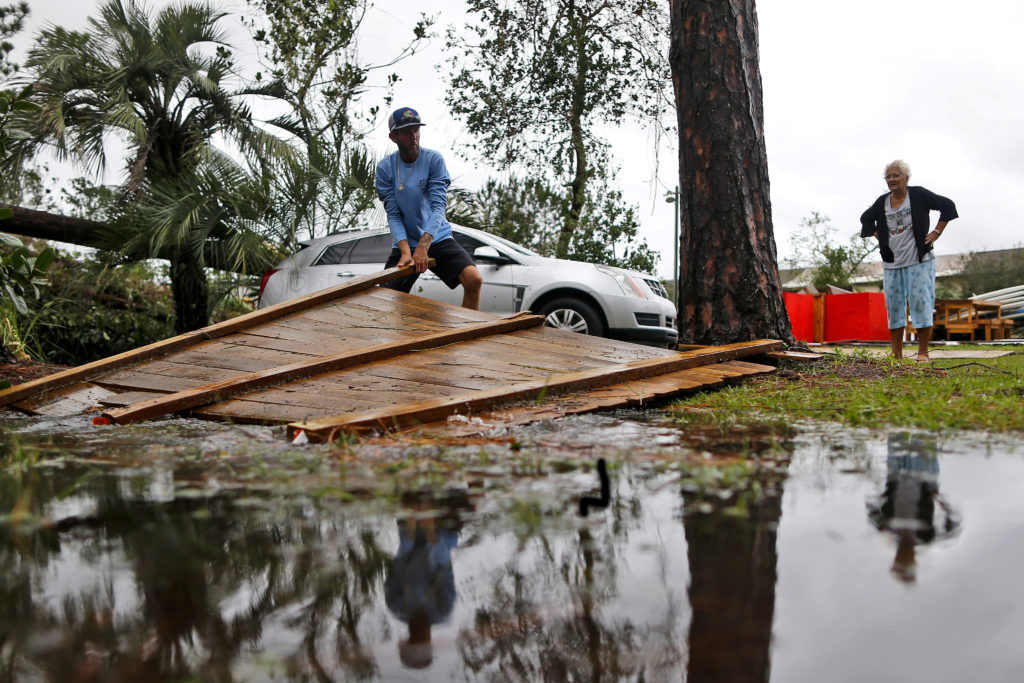 A Panhandle man was killed by a tree that toppled on a home, Gadsden County Sheriff’s Office spokeswoman Anglie Hightower said. But she added emergency crews trying to reach the home were hampered by downed trees and debris blocking roadways. The debris was a problem in many coastal communities and still hundreds of thousands of people were also left without power.

Michael sprang quickly from a weekend tropical depression, going from a Category 2 on Tuesday to a Category 4 by the time it came ashore. More than 375,000 people up and down the Gulf Coast were ordered or urged to evacuate, but it moved so fast that people didn’t have much time to prepare, and emergency authorities lamented that many ignored the warnings , thinking they could ride it out.

In Panama City, plywood and metal flew off the front of a Holiday Inn Express. Part of the awning fell and shattered the glass front door of the hotel, and the rest of the awning wound up on vehicles parked below it.

“Oh my God, what are we seeing?” said evacuee Rachel Franklin, her mouth hanging open.

Based on its internal barometric pressure, Michael was the third most powerful hurricane to hit the U.S. mainland, behind the unnamed Labor Day storm of 1935 and Camille in 1969. Based on wind speed, it was the fourth-strongest, behind the Labor Day storm (184 mph, or 296 kph), Camille and Andrew in 1992.

The storm is likely to fire up the debate over global warming. Scientists say global warming is responsible for more intense and more frequent extreme weather, such as storms, droughts, floods and fires, and Michael was fueled by abnormal water temperatures in the Gulf — 4-to-5 degrees above the historic norm for this time of year. But without extensive study, they cannot directly link a single weather event to the changing climate.

After Michael left the Panhandle late Wednesday, Kaylee O’Brien was crying as she sorted through the remains of the apartment she shared with three roommates at Whispering Pines apartments, where the smell of broken pine trees was thick in the air. Four pine trees had crashed through the roof of her apartment, nearly hitting two people.

“We haven’t seen her since the tree hit the den. She’s my baby,” a distraught O’Brien said, her face wet with tears.

READ MORE: 5 important stories that have nothing to do with the White House