WASHINGTON (AP) — Inspired by the climate activism of a Swedish teenager, Jane Fonda said Friday that she is returning to civil disobedience nearly a half-century after she was last arrested at a protest.

Fonda, known for her opposition to the Vietnam War, was one of 17 climate protesters arrested Friday at the U.S. Capitol on charges of unlawful demonstration by what she called “extremely nice and professional” police. Fellow actor Sam Waterston was also in the group, which included many older demonstrators.

Now 81, Fonda said she plans to get arrested every Friday to advocate for urgent reduction in the use of fossil fuels. She hopes to encourage other older people to protest as well.

Getting arrested in 2019, poses some entirely new challenges, Fonda told The Associated Press in an interview.

These days, “they use white plastic things on your wrists instead of metal handcuffs, and that hurts more,” she said.

“The only problem for me is I’m old,” Fonda said. After her first arrest last week, she had trouble getting into the police vehicle because she was handcuffed behind her back and “had nothing to hang on to.”

On Friday, Fonda emerged from a cluster of officers and stepped smartly into the police wagon, her hands cuffed in front of her.

“Thanks, Jane!” some of the protesters called out.

“What would you tell President Trump?” someone in the crowd yelled to her earlier, as she and other protesters stood on their platform in front of the Capitol.

“I wouldn’t waste my breath,” she shouted back, drawing laughter. 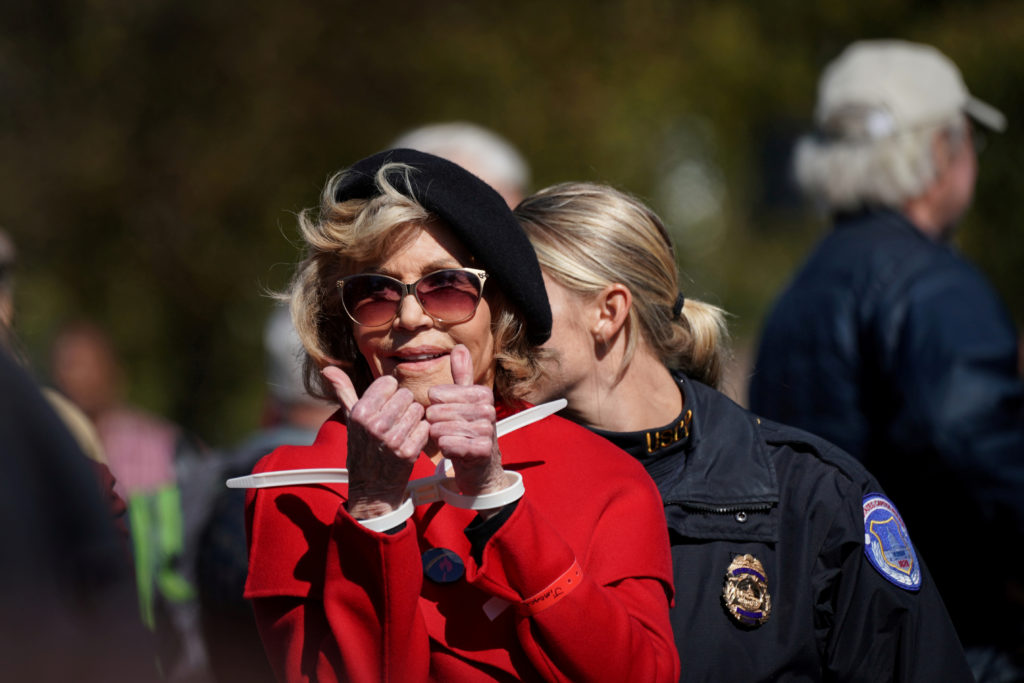 Actor and activist Jane Fonda gives a thumbs up in handcuffs as she is detained for blocking the street in front of the Library of Congress during the “Fire Drill Fridays” protest in Washington, U.S., October 18, 2019. Photo by Sarah Silbiger/Reuters

The rally drew at least a couple of hundred people, young and old.

While Fonda has taken part in many climate demonstrations, she said Greta Thunberg’s mobilization of international student strikes and other activism, along with the climate writing of author Naomi Klein, prompted her to return to courting arrests for a cause.

Fonda cannot remember precisely which cause led to her last arrest in the 1970s.

She said her target audience now is people like her who try to cut their plastic use and drive fuel-efficient cars, for instance, but otherwise “don’t know what to do and they feel helpless,” she said. “We’re trying to encourage people to become more active, across the age spectrum.” 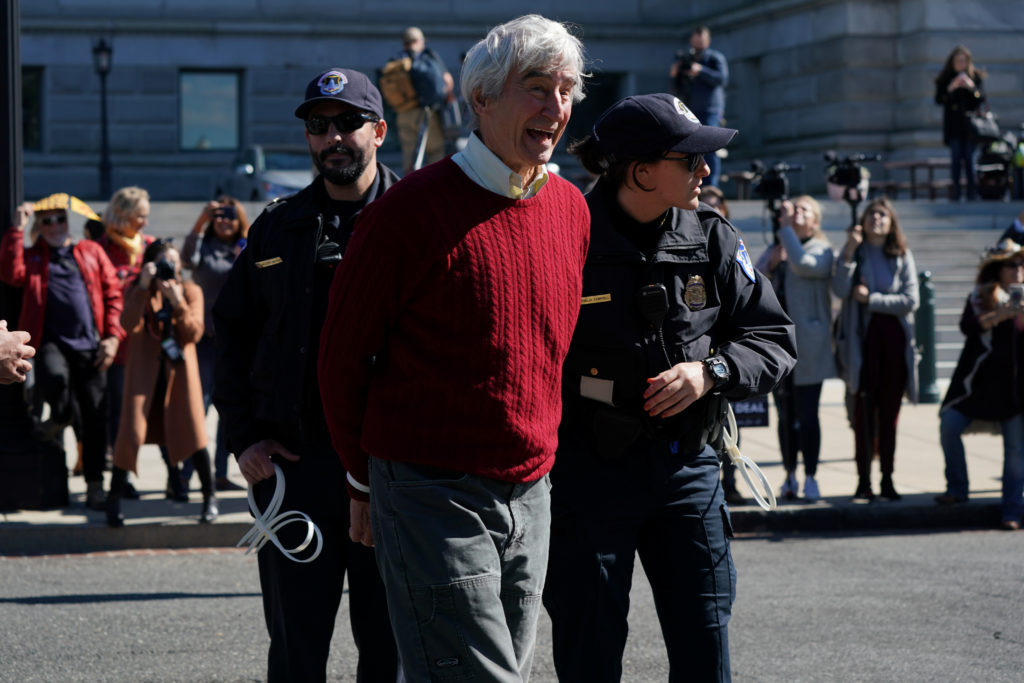 Actor Sam Waterston is handcuffed and detained by Capitol Police during the “Fire Drill Fridays” protest outside the Library of Congress in Washington, U.S., October 18, 2019. Waterson’s co-star in “Grace & Frankie”, Jane Fonda, lead the demonstration and was also detained. Photo by Sarah Silbiger/Reuters

Especially in the U.S., young people appear to be driving many of the protests and rallies demanding government action on climate change, University of Maryland sociologist Dana Fisher said.

Nearly half of the people who turned out for a September climate protest in Washington were college age or younger, and a quarter were 17 or younger, for instance, Fisher said. Most were female.

On the other hand, it was older, white females who turned out for earlier protests during the Trump administration, like the women’s marches, Fisher noted.

“There’s a whole group of very activated, middle-age white women. They woke up after the election, and they haven’t gone back to bed,” Fisher said.

So far, those people have not been involved in the youth climate movement. Fonda’s efforts could “get them out there,” Fisher said.

Asked how she would answer any young climate activist who complained of being co-opted, Fonda said, “I would hug them.”

And she did just that with some of the teenagers and other young activists she invited up to the stage to speak.

“It’s a good thing that Jane is doing, to try to shift the paradigm so it’s not just falling on young people” to rally the public on fossil fuel emissions, said Joe Markus, a 19-year-old Washington-area student attending Friday’s protest.

Leslie Wharton, 63, from Bethesda, Maryland, sat out the Vietnam War protests that drew out Fonda. She came out Friday as part of a group calling itself Elders Climate Action.

Lots of people of all ages are worried about climate change and want to do something, Wharton said, but “us elders are retired or part-time. We can take the time.”

Left: Actor and activist Jane Fonda blocks the street in front of the Library of Congress during the "Fire Drill Fridays" protest in Washington, U.S., October 18, 2019. Fonda and fellow protesters, including actor Sam Waterston, were later detained by Capitol Police. Photo by Sarah Silbiger/Reuters

Why extreme climate scenarios no longer seem so unlikely