Cutting deep into the hearts of an emotional crowd in Washington, D.C., on Saturday, Emma González, a leader of the March for Our Lives, held silence on stage for most of 6 minutes and 20 seconds, the amount of time it took a shooter to kill her classmates on Valentine’s Day.

It was evocative of the hour that González and other survivors waited at Marjory Stoneman Douglas High School in Parkland, Florida on Valentine’s Day to hear whether their friends were still alive.

“No one knew that the people who were missing had stopped breathing long before any of us even knew that a code red had been called,” she told tens of thousands of people who had been rallying near the National Mall for several hours during a short speech.

Then, she named the 17 who died, briefly described what they could never do again, and abruptly stopped speaking, staring into the crowd for the remainder. She would occasionally sniffle or cry, breathing into the microphone while maintaining the same determined expression that became iconic of the resistance that rose from Parkland’s pain.

Parents held their children, who cradled their heads into their parents’ necks, students cried with each other, and some chanted, “Never again,” echoing a hashtag that González’s movement has created, but for the majority of the time the crowd waited with her.

She was the last survivor to talk at the highly anticipated rally, which started at noon in D.C.

Singer Andra Day along with students from the Baltimore middle school Cardinal Shehan kicked it off the event singing “Rise Up” as the crowd danced.

Co-organizer Cameron Kasky was the first survivor to address the crowd about three hours ahead of González, warning politicians to, “Stand for us or beware. The voters are coming.”

González and Kasky were among five leaders of the movement featured on the cover of Time Magazine this week.

The survivors’ plight and ability to express it has resonated with people around the country and world, evoking international support that has been compared to Vietnam War-era resistance. 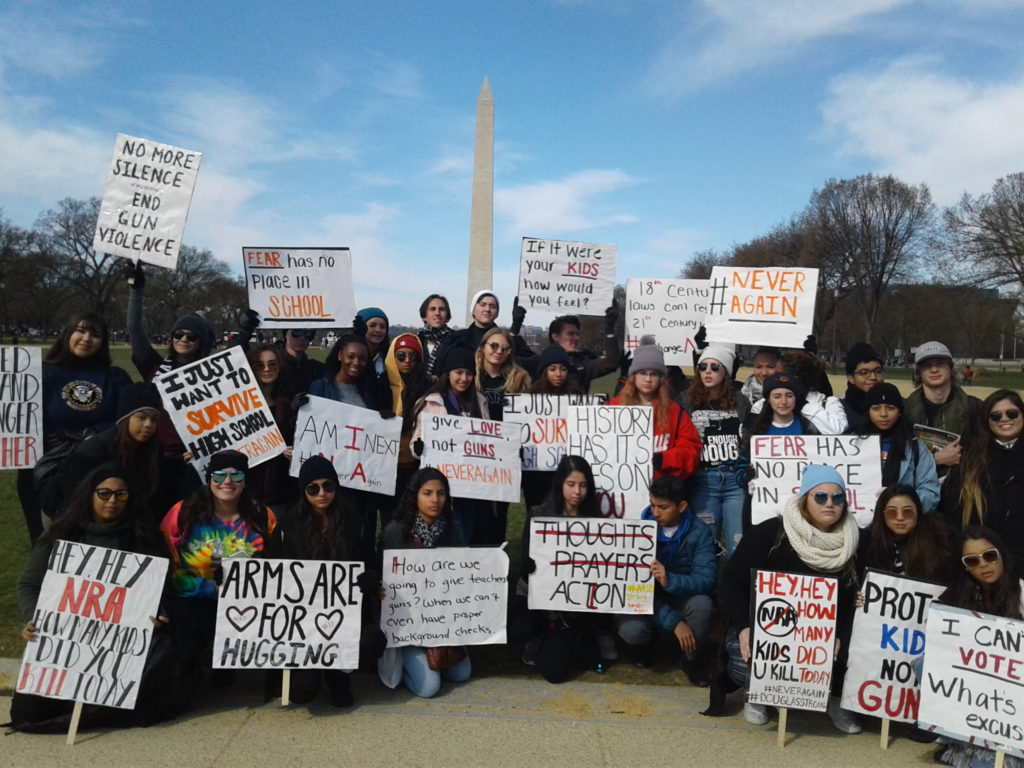 People rallying for a March for Our Lives in solidarity of Parkland massacre survivors in Washington, D.C. on Saturday, March 24, 2018. Photo by Michael Rios

There were also sibling marches Saturday in Mumbai, Paris, Buenos Aires, Tokyo and throughout the country, from a Safeway parking lot in Burns, Oregon, to Wright Square in Savannah, Georgia, Los Angeles and New York.

So proud to be a part of Gen Z. Look what we did. And we’re just getting started. #MarchForOurLives pic.twitter.com/MFyegSfdFI

Nikolas Cruz, a 20-year-old who had attended Marjory Stoneman Douglas High School, confessed to the shooting and has been charged with 17 counts of premeditated murder. He used the same AR-15 rifle, which is designed to fire dozens of rounds in seconds for combat situations, that killed 58 people at a concert in Las Vegas, 49 at a nightclub in Orlando, 26 a church in Texas and 26 at an elementary school in Newtown, Connecticut. 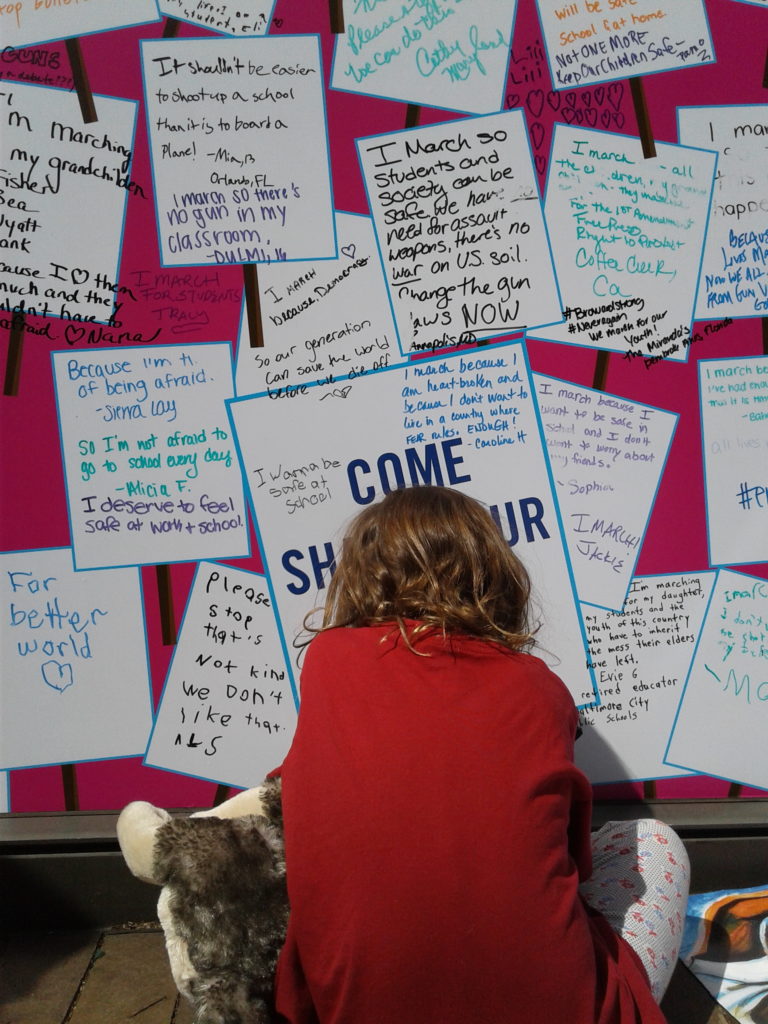 A young girl signs a wall at in Washington, D.C. during the March for Our Lives on Saturday, March 24. Photo by Michael Rios

The Parkland survivors are advocating to ban the sale of assault rifles, to prohibit the sale of high-capacity magazines that enable multiple rounds at a time and also enforce more rigorous background checks ahead of gun sales.

The next organizer to address the crowd was Alex Wind, who was also on Time’s cover. Wind’s voice crackled as he shouted into the microphone that more than 250 political officials have yet to take a stance on gun rights.

“Now we need to educate ourselves on which politicians are truly working for the people and which ones we need to vote out,” he yelled. 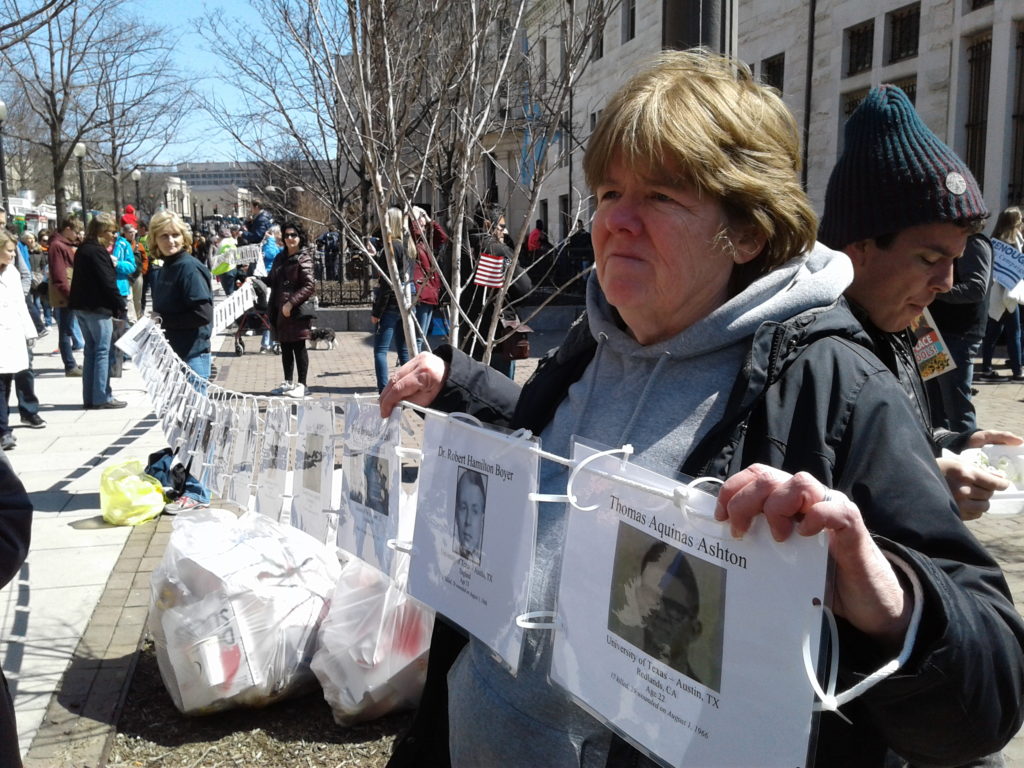 Maureen Glover made a line of obituaries of more than 200 people who have been victims of school shooting victims dating to the 1960s for the March for Our Lives in Washington, D.C. on Saturday, March 24, 2018. Photo by Michael Rios

For some, the march has demanded of them a level of poise and concentration rarely expected of youth, even as they continue schoolwork and process grief and trauma.

While sipping a banana strawberry smoothie at Panera in Florida this week, organizer Jaclyn Corin, a 17-year-old junior class president who has six essays to write for her Advanced Placement language and composition class, told the Los Angeles Times, “It’s very hard to juggle.”

It has also provoked more than a dozen businesses including Hertz, Avis and MetLife to cut ties with the National Rifle Association (NRA), one of the country’s biggest lobbies. Major companies such as Walmart and Dick’s Sporting Goods have also taken steps to limit sales of firearms by raising the purchasing age to 21.

The NRA has called the corporate backlash, a “shameful display of political and civic cowardice.” It had not made any statements on Saturday, but in the lead up to the march tweeted a USA Today story about high schoolers who support gun rights and feel left out.

Contrary to what the #MSM is pushing, many American high schoolers do not blame school shootings on guns and don't argue the answer is tighter restrictions on everyone's #2A rights. #DefendTheSecond #NRA https://t.co/ijLdFm6ZOI

The White House commended the students for exercising their First Amendment rights Saturday, after announcing Friday it would ban bump stocks.

Day was among a long list of pop stars including Ariana Grande — whose concert at the Manchester Arena last year was attacked by an Islamic State suicide bomber that killed 23 people — performing. 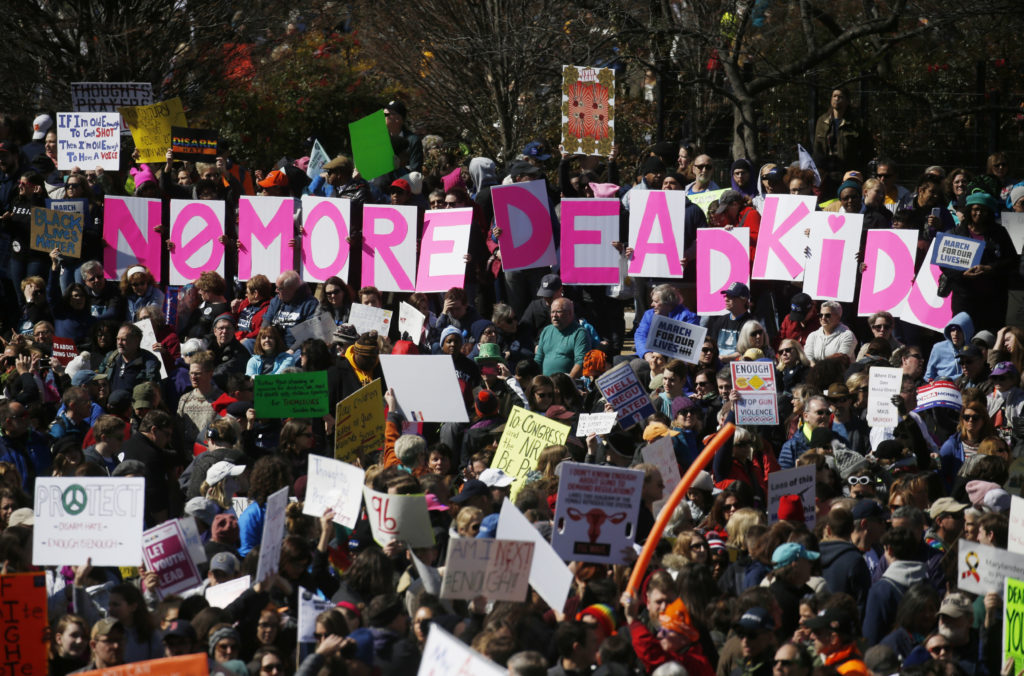 Participants hold up signs as students and gun control advocates hold the “March for Our Lives” event demanding gun control after recent school shootings at a rally in Washington, U.S., March 24, 2018. Photo by Leah Millis/Reuters

“Thank you so much for fighting for change,” Grande said after her performance, before heading into the crowd to take selfies with supporters. “I love you, thank you.”

Other celebrities including Oprah Winfrey, George Clooney and Steven Spielberg gave thousands of dollars in donations, adding to more than $3 million raised on GoFundMe.

The attention has invigorated many young activists who have been fighting against gun violence for years. But it has also hurt them.

“When black youth were asking for a donation, where was Oprah’s money or where was George Clooney’s?” 11-year-old Basil Mann asked her classmates in Washington, D.C., during a school walkout on March 14 to commemorate the Parkland survivors.

A Washington Post analysis on Wednesday also found that mass shootings at predominantly white schools draw the most attention from journalists, yet 62.6 percent of students exposed to gun violence at school since 1999, the year of the Columbine massacre, were children of color.

“Are they going to arm the person in the Mickey Mouse costume at Disney?… This is what the NRA wants and we will not stand for it.” – Alex Wind, organizer

Marjory Stoneman Douglas is a predominately white school in an affluent suburb that is not prone to gun violence. And while those privileges do not invalidate the community’s trauma, Gonzalez has implied that they have contributed to the attention she and other survivors are receiving.

Wind also encouraged supporters on Saturday to be inclusive.

And the speeches included many young, black people who have also been affected by guns.

“I am here to represent the African American girls whose stories don’t make the front page of every national newspaper, whose stories don’t lead on the evening news,” said 11-year-old Naomi Wadler. “I represent the African American women who are victims of gun violence, who are simply statistics instead of vibrant, beautiful girls full of potential.”

Yolanda Renee King, 9, who is the granddaughter of Martin Luther King Jr. and Coretta Scott King, also had the crowd chanting with her, “We are going to be a great generation.”

“I have a dream that enough is enough and that this should be a gun free world, period,” King said.

Since the shooting, laws have changed in Oregon, Rhode Island, Florida and Washington. They range from banning bump stocks to raising the age for purchasing rifle to 21-years-old.

Other actions, like a federal bill that passed the U.S. House of Representatives on the day of the national walkout, are less connected to the movement’s goals.

The “Students, Teachers, and Officers Preventing (STOP) School Violence Act of 2018” would authorize $50 million annually in grants to strengthen school security as well as train students and teachers to be more aware of potential threats.

But the survivors do not support increased security, which youth of color can perceive as a direct threat to their safety.

After her sharp and simple speech, González ended her silence with the message: “Fight for your lives before it’s someone else’s job.”

Left: Emma Gonzalez, a student and shooting survivor from the Marjory Stoneman Douglas High School in Parkland, Florida, cries as she addresses the conclusion of the "March for Our Lives" event demanding gun control after recent school shootings at a rally in Washington, D.C., on March 24, 2018. Photo by Jonathan Ernst/Reuters