SOUTHFIELD, Michigan (AP) — A battering winter storm left nearly 2 million homes and businesses without power across the United States on Saturday, as millions more people were left to worry how the prospect of further outages would effect holiday and travel plans.

The blinding blizzards, freezing rain and frigid cold that enveloped much of the country knocked out power to 1.7 million households and businesses, while major electricity grid operator warned the 65 million people it serves across the eastern U.S. that rolling blackouts might be required.

Pennsylvania-based PJM Interconnection said power plants are having difficulty operating in the frigid weather and has asked residents to refrain from unnecessary use of electricity. It issued an emergency call for conservation system-wide — asking residents in 13 states to set thermostats lower than usual, to postpone use of major appliances like stoves and dishwashers and to turn off nonessential lights. Commercial and industrial power users have also been asked to cut back.

PJM officials said there is increased electricity demand across its system at the same time that some power plants are having difficulty operating in the extreme cold. They said they want people to be prepared for the possibility of rolling blackouts.

“It’ll be short-lived, we’ll do everything we can to prevent it, but it is a real possibility,” said Mike Bryson, PJM’s senior vice president for operations.

Adding to the woes were power outages that by early Saturday were still affecting more than 1.7 million homes and businesses, according to the website PowerOutage, which tracks utility reports.

The storm was nearly unprecedented in its scope, stretching from the Great Lakes near Canada to the Rio Grande along the border with Mexico. About 60% of the U.S. population faced some sort of winter weather advisory or warning, and temperatures plummeted drastically below normal from east of the Rocky Mountains to the Appalachians, the National Weather Service said.

Freezing rain coated much of the Pacific Northwest in a layer of ice, while people in the Northeast faced the threat of coastal and inland flooding.

The frigid temperatures and gusty winds were expected to produce “dangerously cold wind chills across much of the central and eastern U.S. this holiday weekend,” the weather service said, adding that the conditions “will create a potentially life-threatening hazard for travelers that become stranded.”

“In some areas, being outdoors could lead to frostbite in minutes,” it said.

As millions of Americans were traveling ahead of Christmas, more than 5,700 flights within, into or out of the U.S. were canceled Friday, according to the tracking site FlightAware.

Multiple highways were closed and crashes claimed at least eight lives, officials said. Four people died in a massive pileup involving some 50 vehicles on the Ohio Turnpike. A Kansas City, Missouri, driver was killed Thursday after skidding into a creek, and three others died Wednesday in separate crashes on icy northern Kansas roads.

In Canada, WestJet canceled all flights Friday at Toronto Pearson International Airport, as meteorologists there warned of a potential once-in-a-decade weather event. While in Mexico, migrants camped near the U.S. border in unusually cold temperatures as they awaited a U.S. Supreme Court decision on pandemic-era restrictions that prevent many from seeking asylum.

Forecasters said a bomb cyclone — when atmospheric pressure drops very quickly in a strong storm — had developed near the Great Lakes, stirring up blizzard conditions, including heavy winds and snow. 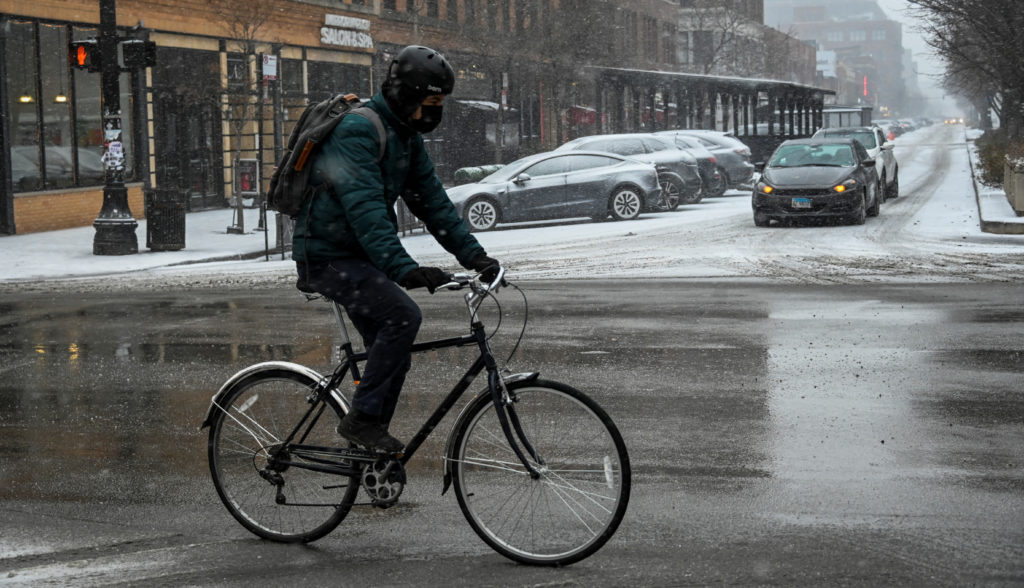 A bicyclist makes his way along Halsted Street during a cold weather front as a weather phenomenon known as a bomb cyclone hits the Upper Midwest, in Chicago, Illinois, Dec, 22, 2022. Photo by Matt Marton/REUTERS

Even people in Florida were braced for unusually chilly weather as rare freeze warnings were issued for large parts of the state over the holiday weekend.

Activists were rushing to get homeless people out of the cold. Nearly 170 adults and children were keeping warm early Friday in Detroit at a shelter and a warming center that are designed to hold 100 people.

“This is a lot of extra people” but it wasn’t an option to turn anyone away, said Faith Fowler, the executive director of Cass Community Social Services, which runs both facilities.

South Dakota Gov. Kristi Noem said she was deploying the National Guard to haul timber to the Oglala Sioux and Rosebud Sioux tribes and help with snow removal.

“We have families that are way out there that we haven’t heard from in two weeks,” said Wayne Boyd, chief of staff to the Rosebud Sioux president.

On the Pine Ridge Indian Reservation, Harlie Young was huddled with five children and her father around a wood stove as 12-foot (3.6-meter) snow drifts blocked the house.

“We’re just trying to look on the bright side that they’re still coming and they didn’t forget us,” she said Friday.

In Boston, rain combined with a high tide, flooded some downtown streets on Friday.

Left: A driver makes their way through a flooded street at high tide during a winter storm in Gloucester, Massachusetts, Dec. 23, 2022. Photo by Brian Snyder/REUTERS