ATLANTA (AP) — NFL owners approved a new policy Wednesday aimed at quelling the firestorm over national anthem protests sparked by Colin Kaepernick and polarized by President Trump, permitting players to stay in the locker room during the “The Star-Spangled Banner” but requiring them to stand if they come to the field.

Commissioner Roger Goodell said the change was approved unanimously by the owners at their spring meeting in Atlanta, but even that was up for debate.

The head of the San Francisco 49ers — Kaepernick’s former team — said his franchise abstained from the vote. CEO Jed York said he wasn’t comfortable with a process that didn’t directly involve the players.

“I want to work with my team to make sure everything we do is about promoting the right types of social justice reform and getting to a better America,” York said.

The NFL Players Association said it wasn’t consulted about the new policy and would challenge any changes that violate the collective bargaining agreement.

Clearly, Goodell and most owners just want to put the issue behind them.

“We want people to be respectful of the national anthem. We want people to stand,” the commissioner said. “We’ve been very sensitive on making sure that we give players choices, but we do believe that moment is an important moment and one that we are going to focus on.”

In the surest sign that players were not part of the discussions, any violations of the policy would result in fines against the team — not the players. That could be a way to avoid legal challenges from the players’ union, since fines against a team would not be subject to collective bargaining.

The league did say teams could impose their own workplace rules for those who fail to show respect for the flag and anthem, but didn’t say what those policies might be. Because the new policy is a change in the terms and conditions of employment that was not collectively bargained, any attempts to fine individual players who continue to protest in public would surely be opposed by the union.

The owners spent several hours addressing the contentious issue — which has reached all the way to the White House. 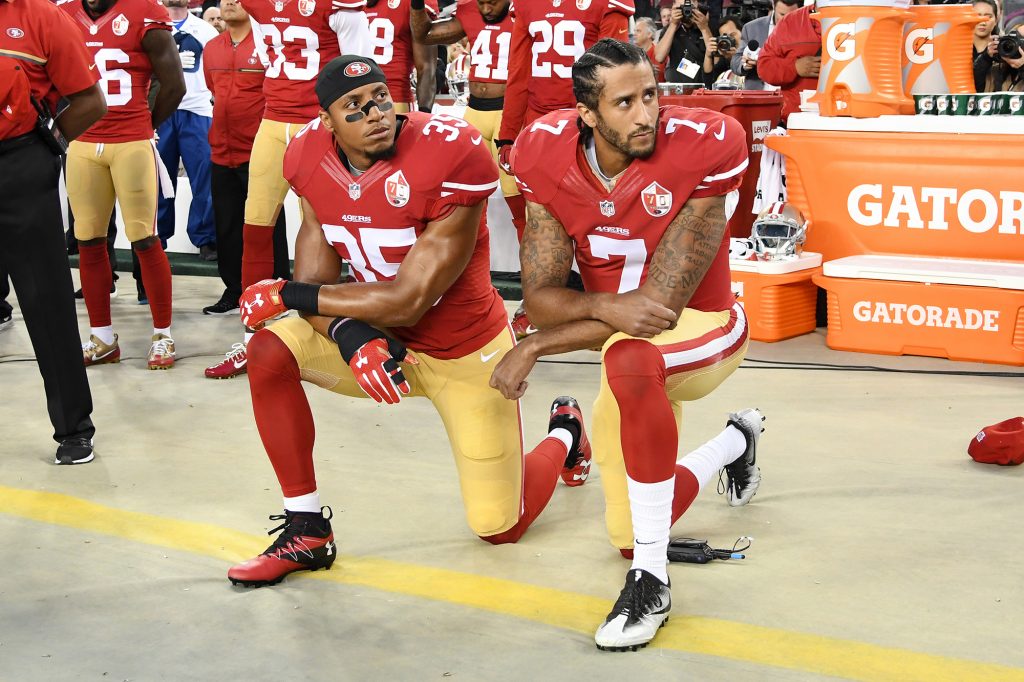 The controversy over players kneeling in the NFL has revealed that the league’s embrace of American iconography has different meanings for different audiences. Photo by Thearon W. Henderson/Getty Images

Kaepernick, the former 49ers quarterback, began kneeling during the national anthem in 2016, a quiet but powerful protest against police brutality and racial inequities in the justice system.

Other players took up the cause, and the gesture carried on during the 2017 season even after Kaepernick left the 49ers and failed to land a job with another team.

Trump turned the debate into a campaign issue , saying the NFL should fire any player who takes a knee during “The Star-Spangled Banner.” The NFL hasn’t gone that far, but Kaepernick has yet to land another job and one of his former teammates and fellow protesters, safety Eric Reid, is also out of work.

Both have filed collusion grievances against the NFL.

While the owners touted the change as a compromise that everyone should get behind, the union expressed immediate skepticism.

“The NFL chose to not consult the union in the development of this new ‘policy,'” the NFLPA said in a statement. “NFL players have shown their patriotism through their social activism, their community service, in support of our military and law enforcement and yes, through their protests to raise awareness about the issues they care about.”

The statement added, “The vote by NFL club CEOs today contradicts the statements made to our player leadership by Commissioner Roger Goodell and the Chairman of the NFL’s Management Council John Mara (co-owner of the New York Giants) about the principles, values and patriotism of our League.”

York said he intended to meet with his players to discuss the change.

The NFL started requiring players to be on the field for the anthem in 2009 — the year it signed a marketing deal with the military. But owners sent a bit of a convoluted message with the new policy, appeasing those who feel the national anthem must be treated with reverence, while allowing some sort of conduit for players to protest as long as they stay out of the public eye.

York said other initiatives were in the works, including a suspension of all concessions sales during the national anthem .

“If we want to be sacrosanct, if we want to honor the flag, we’ve got to make sure we go through a litany of things,” he said. “We’re not going to force people to stand in their seats, but we’re certainly going to make sure we’re not profiting during that two or three minutes of time during the game.”

Steelers guard Ramon Foster shrugged his shoulders when asked about the new policy, saying the owners will always hold an upper hand over the players.

“If the team says ‘this is what we’re doing,’ and ownership (does too), you either deal with it or you’re probably going to get cut,” Foster said. “You can fight the resistance on that one, but same as we can’t smoke marijuana because it’s illegal in certain states, or it’s legal in certain states, it’s the same issue. You have to adhere to the rules and if not, they’ll find a way to get you up out of there.”

Goodell took a more conciliatory path. He insisted the league met with countless players over the last year to get their input on the fractious anthem debate anthem, which some have even pointed to as a major reason for the NFL’s declining TV ratings.

“We think that we’ve come up with a balanced process, procedure and policy that will allow those players who feel they can’t stand for the anthem to stay in the locker room,” the commissioner said. “There’s no penalty for that, but we’re going to encourage all of them to be on field. We’d like for all of them to be on the field and stand at attention.”

Goodell was asked who would get to decide what actions would be considered disrespectful to the anthem or the U.S. flag.

“Well, I think the general public has a very strong view of what respect for the flag is and that moment,” he said. “We have language in our policy that talks about that, standing attention, hats off and focused. And I think the general arbiter will the clubs and the league and we’ll work with our players to get their viewpoint also.”

Associated Press Writer George Henry in Atlanta and AP Sports Writer Will Graves in Pittsburgh contributed to this report.

NFL players team up in defiance and solidarity