Despite decades of leading the country in female incarceration rates and evidence that long sentences do not deter drug users, Oklahoma lawmakers are rushing to undermine recent voter initiatives that weakened punishments for drug offenses and invested in rehabilitation services.

Oklahoma voters in November turned drug possession charges, which had been felonies with the exception of a first-time marijuana offense, into misdemeanors, capping the maximum punishment at one year in jail and a $1,000 fine, effective July 1. They also reallocated money saved toward mental health and rehabilitation services.

In a swift response, the House passed House Bill 1482 this month with the minimum votes required, ensuring the change would not apply to people within 1,000 feet of all schools. People caught in that radius would still be charged with a felony and a first-time offense would still carry a sentence of up to five years in prison. That area encompasses about 21 percent of the population in Tulsa County, according to advocates for the state questions. The bill also does the same for anyone carrying drugs in the presence of a child — caveats that those advocates say undermine the will of the voters.

“What that means is, if you battle addiction in one area in our state you might get help, but if you battle it in different area, it’s a felony crime and you go to prison,” said Kris Steele, former speaker of the House and champion of the initiatives. “It’s a direct assault on the will of the people.”

“If you battle addiction in one area in our state you might get help, but if you battle it in different area, it’s a felony crime and you go to prison.” — Kris Steele, former speaker of the Oklahoma House

The debate is pitting district attorneys and law enforcement agencies responsible for prosecuting these cases against people like Candida Ulibarri, whose methamphetamine addiction followed years of repressed trauma — and clashed with the judicial system.

It started for Ulibarri when she was 8 years old. Her father, who was prone to violence, introduced her to marijuana and alcohol. As a child, she was molested by friends of the family and said when she told her mother, she would blame Ulibarri for “dressing provocatively.”

“It was some shorts; little, tiny, beige, flowery shorts with fringe and a beige top with little flowers. It was just a cute little outfit,” she said. “But she accused me of being a hoochie. So I was angry.”

She continued to drink and smoke, started running away and got into fights, which she said in retrospect were efforts to subdue the trauma she was enduring. By 13, her father showed her lines of cocaine on a glass table. She was pregnant at 14. Her baby Talysa was born with a gene mutation that gave her a brain disease and needed extra care while Ulibarri was in nursing school. She started snorting meth to keep up with the long nights.

“I was supermom,” she said.

After 10 months, the baby’s father died of an overdose. Within a year, Ulibarri said, Talysa’s brain had reduced to the size of a Chihuahua’s, and she died.

About a year later, she had another baby, and then a third. She threw a cooler through the window of a truck, which belonged to a man who had fathered one of the children, after she found another girl at his apartment. She had been drinking and taking Xanax. Feeling startled by her own actions, she got into her car, backed out of her spot in the parking lot and accidentally hit him, scraping the skin of his feet and fracturing his femur.

He charged her with assault and battery with a dangerous weapon, and three months before her 22nd birthday, Ulibarri was sentenced to prison for the first time. Two more times followed as she spent a significant portion of her 20s there. She was on her way to serve a fourth sentence when she demanded help instead, fighting to enroll in Tulsa’s intense outpatient program, Women In Recovery.

Oklahoma has led the country for decades with its rate of female incarceration, a gap that continues to grow. Right now, women in Oklahoma are 2.5 times more likely to be arrested than in the rest of the country. In 2015, 60 out of every 100,000 women in the U.S. were incarcerated, while in Oklahoma, it was 155 out of 100,000, according to a bipartisan task force assembled by Gov. Mary Fallin. 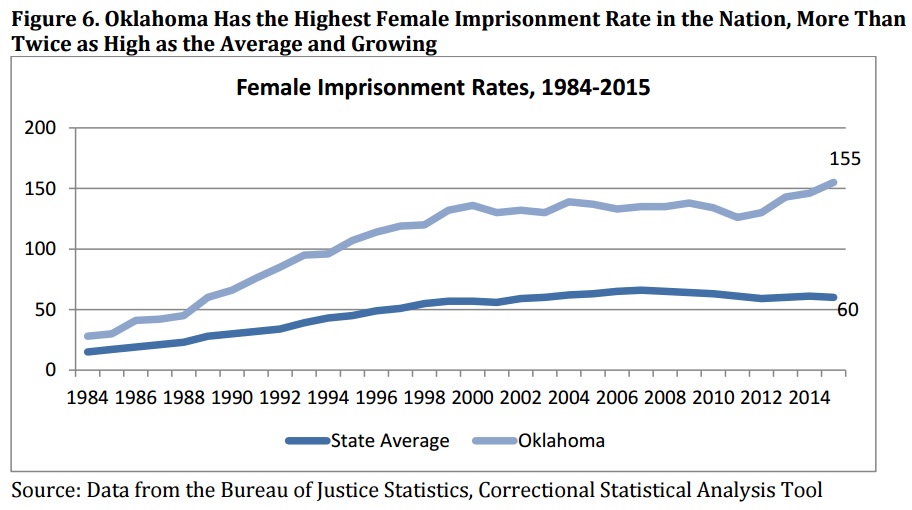 Oklahoma has long had the highest female imprisonment rate in the nation, but in the last few years, the gap has continued to widen as the female prison population grew 30 percent since 2012. Graph from Gov. Mary Fallin’s task force report on criminal justice reform released Feb. 3, 2017

After seven months of investigating the disparity – Oklahoma also incarcerates the second highest rate of men and its overall incarceration rate is 78 percent higher than the national average — the task force created a list of priorities.

It found that 83 percent of female prison admissions were non-violent crimes, while 42 percent were for drug crimes alone. Incarcerated women were also significantly more likely to have a mental illness – about 70 percent of them – as well as substance abuse issues, it found.

It also warned of a critical time, saying that Oklahoma prisons are overcrowded and unsafe and even with the ballot measures, the growth will continue “costing the state over $1.9 billion in the next 10 years unless further changes are made.” 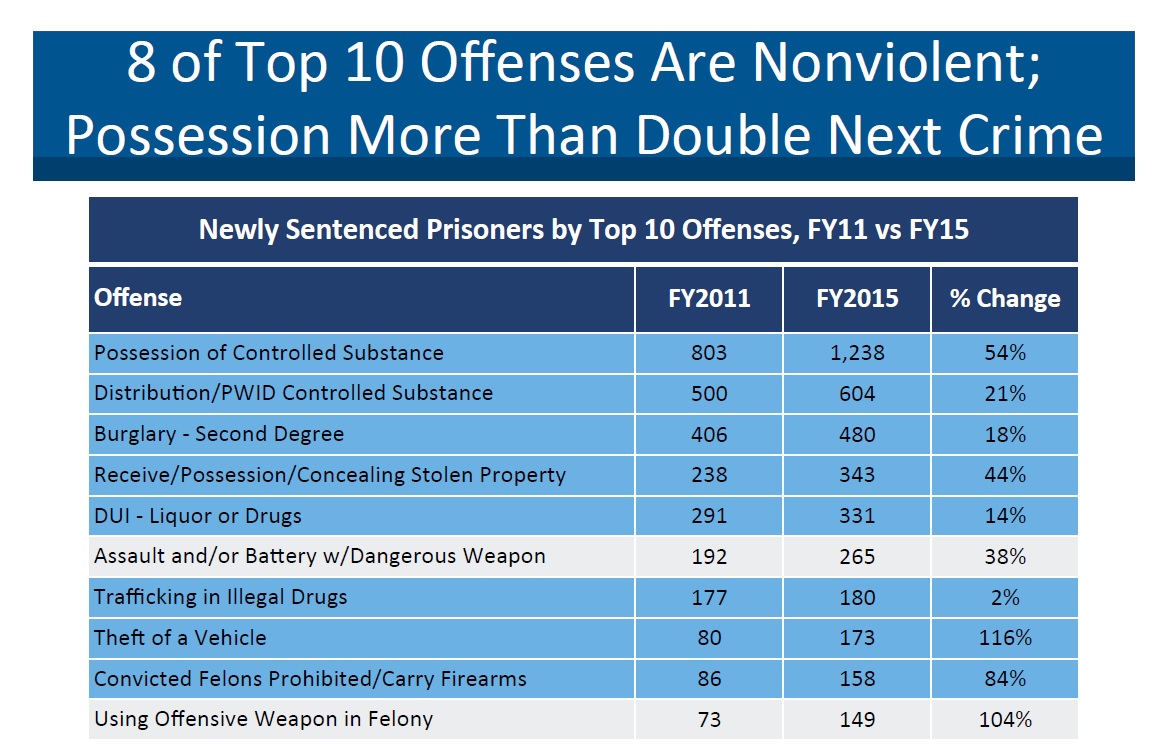 Oklahoma Department of Corrections data. Analysis conducted by the Crime and Justice Institute for the Oklahoma Justice Reform Task Force, presented on August 8, 2016

State Question 780, which also reclassifies felony theft of property less than $1,000 to a misdemeanor, and its companion Question 781, which were both approved in November, came with arguments that frustrated law enforcement.

The Oklahoma Supreme Court had ruled in August that it would write the 200-word descriptions on the ballots because neither the proponents nor then-Attorney General Scott Pruitt were able to do so without bias. The police union in Oklahoma County and district attorneys across the state, worried about the toll it would take on their already-scarce resources, railed against them. In Oklahoma, misdemeanor cases are handled by the county jails while felony cases are handled by state corrections.

“It will be a misdemeanor whether it is the first offense, the 51st or 101st offense, punishable by a fine and up to year in county jail,” said Trent Baggett, the assistant Executive Coordinator of the state’s District Attorneys Council. “The concern with that when someone is placed in a county jail, that is being paid for by the county, and many of our county jails are full.”

Then Republican state Rep. Scott Biggs in February introduced HB 1482, named the “Keep Oklahoma Children Safe from Illegal Drugs Act of 2017,” saying voters did not understand what they had passed.

It originally ensured a major portion of the state – anywhere within 1,000 feet of a school, college, university, day care, church, fairgrounds or recreational area – would still be a felony zone. By the time the House passed it in March, it was toned down to just schools and excluded full-time students.

The deadline for the bill to make it off the Senate floor is April 27.

State efforts to overstep the will of the voters are becoming more common and indicate a disconnect between the people on the ground and the representatives they voted for, according to the National League of Cities, which represents municipalities.

“They’re running and making one case and then when they get in office they do something else,” said Brooks Rainwater, director of the National League of Cities’ Center for City Solutions. “In this type of instance the state government should be responsive to the needs of the residents of the state.”

Steele, who championed 780 and 781, suspects that the effort to roll them back is, in part, motivated by finances.

Court fees can play a critical role in the budgets of the law enforcers and their administrative staff. The think tank Oklahoma Policy Institute released an analysis of them in January, saying that district courts have collected about $75 million per year for their own operations. The courts depend on that money to cover their budgets, the analysis said.

The institute analyzed income from nine counties over five years and found that felony cases consistently made more than misdemeanor and traffic ones because the fees and fines are higher. It found that in 2015, the counties collected $5.58 million from felonies, $4.05 million from misdemeanors and $4.64 million from traffic violations. 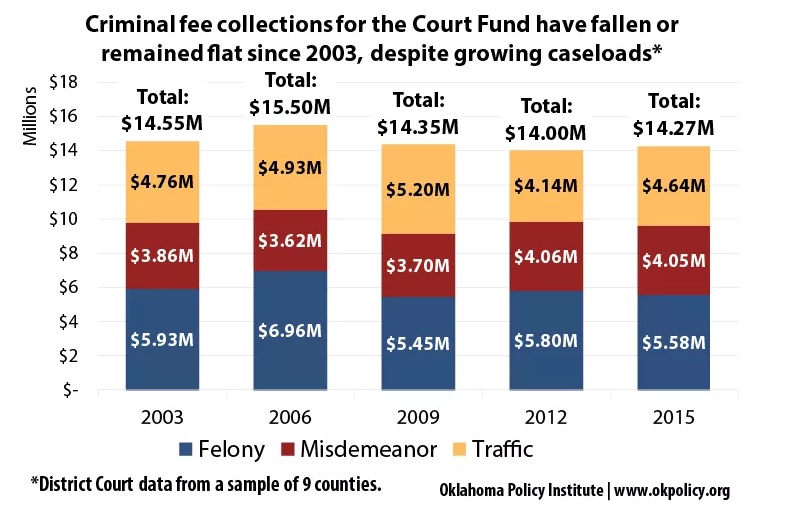 The institute’s policy analyst Ryan Gentzler compared the fines and fees in Tulsa County of one person’s misdemeanor marijuana charge to another person’s felony cocaine possession charge. The misdemeanor cost the defendant about $1,800 while the felony cost about $2,600.

“In both cases, half of it was going to the district attorney supervision fees,” Gentzler said.

The Women In Recovery program gives people tools to cope with the challenges of newfound sobriety, what Ulibarri refers to as “putting me in a foreign country without knowing the language.” It costs about the same as housing an inmate in state prison, around $20,000 a year, though it is privately funded.

The program is part of what makes Tulsa the exception in Oklahoma. While Oklahoma County’s female incarceration rate jumped from 287 to 381 between 2015 and 2016, Tulsa County’s declined from 214 to 162, according to Women In Recovery.

“[Our] outcomes prove that there are better and smarter options than putting women in prison which destroys and is damaging to individuals, children, families and communities,” said director Mimi Tarrasch. “When given access to treatment, we know that people do better.”

Ulibarri said the program helped her quit using, get a job, confront parts of her past and regain custody of one of her daughters as she works to regain custody of the other – opportunities that she said she never had in prison.

“I knew in my heart that once I dealt with some of these issues,” she said, “I’d become the person I am today.”

While Tulsa’s District Attorney Steve Kunzweiler agrees that the recovery programs and other community resources are the most ideal, he thinks 780 and 781 are “a disaster,” saying resources are thin and he has to prioritize problems that he believes pose a more imminent threats to his community.

“If you cut the amount of rope I can have some leeway with, it’s not going to accomplish anything,” said Kunzweiler. “Many drug dealers will be much more comfortable carrying a firearm because there won’t be a predicate for possession of a firearm.”

“Well, honestly, I feel like the people already made a vote. They already spoke,” she said. “I’ve been in prison three times, they didn’t offer me treatment … so I just feel like our voice really needs to be heard on this.”