Vice President Mike Pence pushed back Friday against criticism that the Trump administration has not made enough coronavirus testing available, saying the federal government has “no higher priority” than expanding testing and is working with states and private labs to ramp up that capacity.

The U.S. has conducted more than 3.5 million tests for COVID-19, the illness caused by the new coronavirus, and is now up to about 120,000 tests a day, Pence said in an interview with PBS NewsHour managing editor and anchor Judy Woodruff.

The federal government is pushing to expand testing by working with states and private labs that have a “significant amount of unused testing capacity,” Pence said.

“We actually believe that we could double the amount of testing that’s taking place every day, if we simply brought online all of the testing capabilities in all the labs, and that will continue to be our focus,” Pence said.

Experts disagree about how much testing needs to happen to curb the virus. Some have called for 500,000 a day, while others have estimated the U.S. needs to conduct millions a day.

The vice president also said he anticipates federal approval of a new antibody test “very soon.” This kind of test detects whether a person has been infected by the virus in the past and provides critical information for tracking the spread of the coronavirus.

Once it is finalized, 40 million of the tests could be conducted each month, he said.

Pence’s comments come as governors, including Andrew Cuomo of New York, and public health officials in states reeling from the coronavirus voice growing concern that the U.S. needs to conduct more testing to curb the virus. 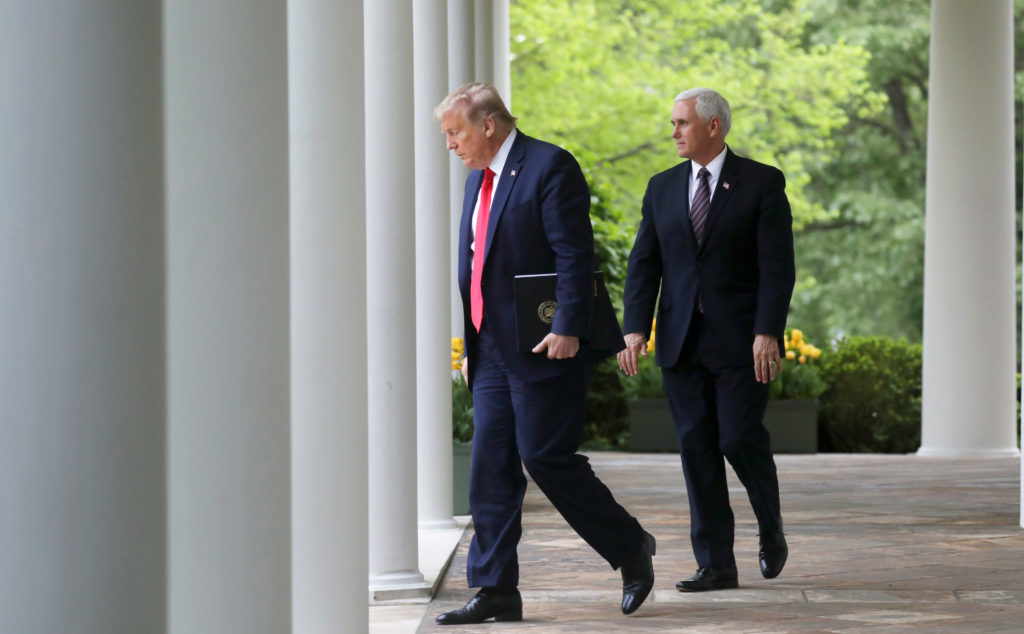 President Donald Trump walks down the West Wing colonnade from the Oval Office with Vice President Mike Pence as they arrive to address the daily coronavirus task force briefing in the Rose Garden at the White House in Washington, on April 14, 2020. Photo by REUTERS/Leah Millis

The U.S. has more than 686,000 reported cases and is approaching 33,000 deaths attributed to the virus, both more than any other country. The number of cases began spiking last month, when states ramped up testing for COVID-19 as the virus spread from Washington, California and New York to the rest of the country.

President Donald Trump has faced mounting criticism for not conducting more testing in the U.S. earlier in the year, after the virus expanded rapidly from China, where the first cases originated, to Europe and other parts of the world.

Experts disagree about how much testing needs to happen to curb the virus. Some have called for 500,000 a day, while others have estimated the U.S. needs to conduct millions a day.

The first case in the U.S. was reported in late January, but more than a month passed before testing began on a large scale, as the White House and states scrambled to respond. During that period, Trump repeatedly dismissed the severity of the outbreak, before shifting his tone and declaring a national emergency in mid-March.

In speaking to the NewsHour, Pence, who is leading the White House coronavirus task force, defended the president’s actions — in particular Trump’s decision in January to ban travelers from China, a move Pence said “bought us an invaluable amount of time.”

Pence also reiterated Trump’s claims that China withheld information about the coronavirus from the World Health Organization. This week, Trump, who has criticized the WHO’s handling of the pandemic, announced that the U.S. was halting funding for the organization, though it was unclear exactly when, or if, the freeze would take place.

“The president’s made it clear that we’re going to hold the World Health Organization and China accountable,” Pence said.

The vice president also touched on the debate in Congress over the next round of relief for workers and businesses impacted by the coronavirus. In the past four weeks, Americans have filed more than 22 million jobless claims, and experts have warned that the unemployment rate could rise to levels not seen since the Great Depression.

Trump has pushed to start reopening the economy on May 1, a move opposed by some governors and other state officials who argue the country needs more time to contain the virus. Several states have extended stay-at-home orders into June, which could complicate any action taken at the federal level to jump-start the economy.

In recent days, negotiations between Republicans and Democrats in Congress have stalled over a GOP-backed proposal to include an additional $250 billion in small business aid in the next coronavirus relief package. Democrats say the bill should also include additional aid for states, hospitals, and individuals who rely on food stamps.

Pence slammed congressional Democrats, arguing that they should work with Republicans to pass a relief bill as quickly as possible. “It’s unconscionable for Democrats in Congress to hold that funding up,” Pence said.