It was about 6:30 on a Friday night in January when Phoenix Police Det. Kemp Layden pulled over a white Jeep Cherokee that was speeding and weaving in and out of its lane.

The 47-year-old driver spoke slowly, his eyes were red and watery, and his pupils were dilated. The inside of the Jeep reeked of marijuana, and the driver failed a field sobriety test, which includes walking heel-to-toe and standing on one leg.

He told the officer he had smoked marijuana a few hours earlier and taken a prescription sedative the night before, police say. The man passed a portable breath test — he wasn’t drunk. But Layden suspected he was impaired by drugs, which the test can’t detect.

A DUI police van equipped with a special chair and table for blood testing pulled up. The man refused to submit to a blood draw. So Layden grabbed his laptop and filled out an electronic warrant, or e-warrant, which was transmitted directly to a judge.

Within 10 minutes, Layden had a search warrant. Another officer drew the man’s blood. A lab report later confirmed he had active THC and a sedative in his blood.

More communities are training police officers to draw drivers’ blood at police stations or in vans.

Police photographed and fingerprinted the driver and issued him a citation for DUI. It took 79 minutes from the time he was stopped until he was picked up by an Uber.

Drugged driving is a growing concern as more states legalize marijuana and the opioid epidemic rages on. To fight it, more communities are training police officers to draw drivers’ blood at police stations or in vans, as in Arizona. And on-call judges are approving warrants electronically, often in a matter of minutes at any time of day or night.

Together, the blood tests and e-warrants “could be a game-changer in law enforcement,” said Buffalo Grove, Illinois, Police Chief Steven Casstevens, the incoming president of the International Association of Chiefs of Police.

While it’s easy for police to screen drivers for alcohol impairment using breath-testing devices to get a blood alcohol concentration level, there’s no such machine to screen for drug impairment.

That’s why blood tests are so important, traffic safety experts say. And alcohol and drugs such as heroin and the psychoactive compound in marijuana are metabolized quickly in the body, so the more time that elapses, the lower the concentration.

Having an officer draw the suspect’s blood soon after he is stopped gives a truer picture of his impairment because he doesn’t have to be taken to a health center for a blood draw after he is arrested, they say. Police departments also save money because they don’t need to pay phlebotomists and hospitals for blood draws.

And having a system in which a judge can sign off quickly on an electronic warrant for a blood test streamlines the process.

Whether or not a state has legalized marijuana for medical or recreational use, you can’t get behind the wheel while you’re impaired. Police make that determination based on your driving pattern, physical appearance, interaction with the officer and roadside sobriety tests. The blood test identifies which substances, if any, are causing that impairment.

A 2016 U.S. Supreme Court ruling found that police don’t need a warrant if a driver suspected of impairment refuses to take a breath test, but they do for a blood test, which pierces the skin. But critics say blood draws outside of a traditional medical setting are unhygienic and that e-warrants could infringe on an individual’s rights.

“There’s an absolute potential for a dilution of a citizen’s constitutional protections against unreasonable search and seizure when it’s done that way,” said Donald Ramsell, a Wheaton, Illinois, DUI attorney and Illinois Association of Criminal Defense Lawyers board member. “A judge can just wake up in his bedroom and hit ‘accept’ [on his device] and go back to sleep.”

Impaired driving kills and injures thousands of Americans every year. Alcohol-related crashes claimed 10,874 lives in 2017, according to the National Highway Traffic Safety Administration.

There isn’t comparable fatality data for drugged driving because reporting requirements differ from state to state and not all of them test fatally injured drivers for drugs. But a report from the Governors Highway Safety Association found that in 2016, about 44 percent of fatally injured drivers who were tested for drugs had positive results, up more than 50 percent compared with a decade earlier. The data does not specify how many were at fault. 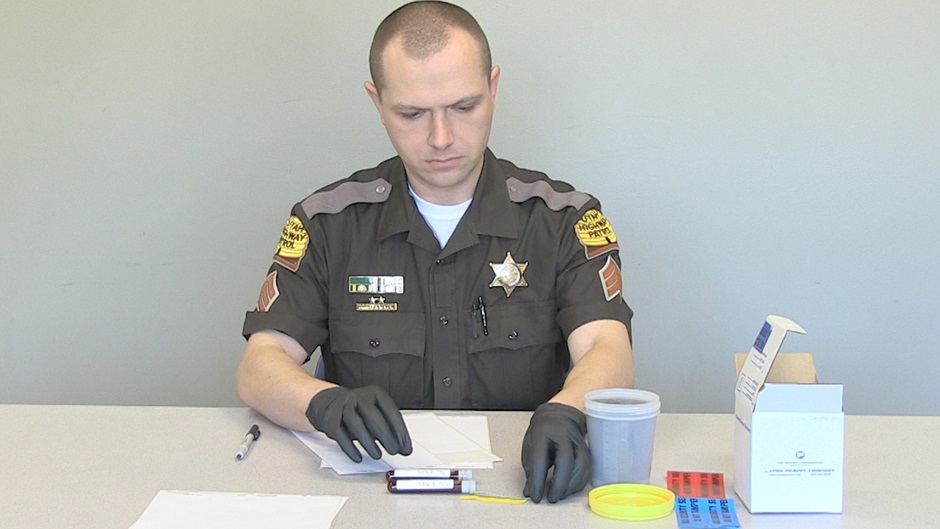 Police blood-draw programs and e-warrants speed up the investigative process.

“It especially helps with drug-impaired driving by getting a blood sample as close to the time someone is operating the vehicle, versus two hours later,” said Jake Nelson, AAA’s traffic safety advocacy and research director.

It’s not only quicker for a certified phlebotomist officer to take the blood, he said, but it also helps with the chain of custody because fewer people are handling the evidence.

“That helps tie it up in a nice bow,” said Nelson, whose organization is advocating for more law enforcement phlebotomy and e-warrant programs. “It protects the suspect and it’s stronger in a court of law.”

Police who draw blood from suspected impaired drivers must be trained and certified before they can pull out a needle.

Critics say blood draws outside of a traditional medical setting are unhygienic and that e-warrants could infringe on an individual’s rights.

Police phlebotomist training varies. In Arizona, for example, officers take 100 hours of training, during which they do 100 clinical blood draws. They also get eight hours of refresher training every two years.

In Phoenix, where police use blood draws as the primary testing method, 49 officers and three police assistants are phlebotomists, according to Layden. They wear gloves when they draw blood, and work in a clean environment, following Occupational Safety and Health Administration standards and sanitizing the chair and table.

But Ramsell, the Illinois DUI lawyer who also practices in Arizona, questions whether blood draws should be done outside of a medical facility, saying it’s “ripe for infection and disease.”

And since officers aren’t in the healing profession, Ramsell said, they’re not concerned about pain reduction or hitting a vein. He cited the case of a client arrested in Arizona who had a blood draw in a police DUI van.

“The officer poked him at least 15 times, and because he has a medical condition it was next to impossible to draw enough blood to fill a 10-cc tube,” he said, referring to the size of the tube in cubic centimeters. “Those knuckleheads just kept poking the hell out of him. They only got 3 ccs.”

Forty-five states have legislation, court rules or a combination that allow the issuance of warrants by telephone, video or electronic affidavits, according to a 2018 study by Responsibility.org, a Virginia-based nonprofit funded by distillers that aims to eliminate impaired driving. Twenty-one states and the District of Columbia specifically allow electronic transmission.

On-call judges are approving warrants electronically, often in a matter of minutes at any time of day or night.

But having a law or rule doesn’t mean court systems are using e-warrants for DUI cases. Nor does it mean they need one to do so. The study examined five states that use e-warrants — Arizona, Delaware, Minnesota, Texas and Utah. Delaware has neither a law nor a court rule specifying requirements for transmitting warrants.

According to Utah Highway Patrol Trooper Janet Miller, a certified phlebotomist, “It’s been a great tool not only for law enforcement but for the individual placed under arrest.

“Instead of spending three to six hours with the officer, it’s been cut down to one to two,” she said. “They can get to the jail sooner and get out sooner.”

But critics worry that the e-warrant process for DUI blood draws can end up being the electronic version of a rubber stamp.

“It’s primarily a question of whether judges are actually reading the warrants with the degree of attention that one would expect,” DUI attorney Ramsell said.

Left: Police say that having an officer draw blood from drivers soon after they're stopped gives a truer picture of impairment and drug levels. Photo by Rick Wilking via Reuters