Poll: How stressed are Americans this holiday season?

‘Tis the season of anxiety for more than a third of U.S. adults who say the holidays stress them out, according to the latest poll from the PBS NewsHour, NPR and Marist.

Still, 58 percent of Americans say the holidays are more fun than stressful.

What summons holiday stress these days?

It’s not just hearing Christmas carols the day after Halloween. Or immediately regretting spending time with a difficult family member (the most disliked aspect of the holidays for 11 percent of people). 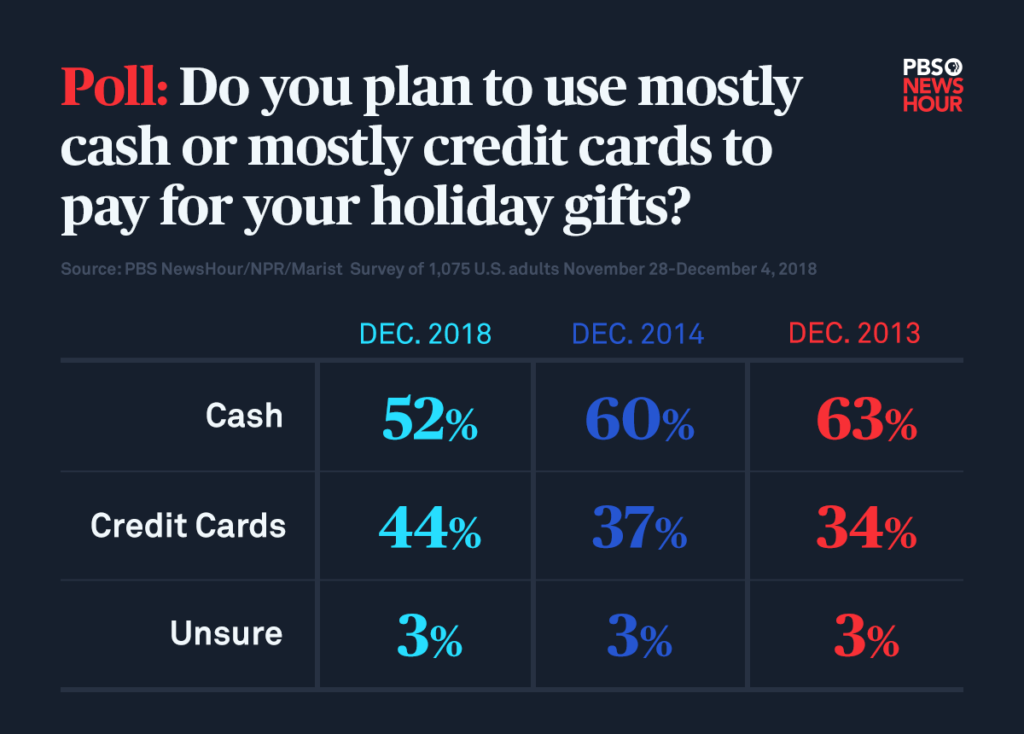 For more than a quarter of people — 33 percent — it was about holiday crowds. Finding the right gift is something 16 percent of Americans dread the most about the month of December. An additional 13 percent of respondents do not look forward to gaining weight from the proliferation of sugary carbohydrate bombs (I see you, office cookie bake-off).

With the rising number of Americans who say they plan to use mostly credit cards to buy presents (44 percent this year compared to 34 percent five years ago), one in 10 respondents said they dread the looming debt associated with the season. According to the National Retail Federation, consumers plan to spend an average of $1,007 this year for gifts, decorations, candy and more. Fifty-two percent of U.S. adults hope to spend the same amount of money as they did last year, and another 35 percent say they want to do more to rein in their holiday expenses.

A majority of Americans think people should wish each other “Merry Christmas” in December, according to a new poll from the PBS NewsHour, NPR and Marist.

Those who prefer “Merry Christmas” include:

The number of “Merry Christmas”-wishers also increased with age:

Among those respondents, 40 percent of younger Americans ages 18 to 29 said they planned to spend less this year, a higher percentage than any other age group, according to this latest survey. In the same age group, a quarter of people say they agonize over gift-giving.

Fewer Americans choose to “shop” at their homes by wrapping and regifting presents. One out of six U.S. adults — 16 percent — said they regift holiday presents, down from 23 percent in 2009.

Thirty-three percent of people want nothing to do with the holiday crowds — online shopping has provided 41 million Americans a way to avoid them.

A third of respondents said they did all or most of their shopping while cruising the internet. And the percentage of people who take that approach has nearly doubled since 2014, according to historic polling data from Marist. Four years ago, 19 percent said they relied on the internet to complete their holiday shopping. That is far more than a decade ago when, in 2007, just 4 percent of respondents said they did the vast majority of their shopping online.

Americans are becoming hybrid shoppers during the holidays, said Katherine Cullen, the director for industry and consumer insights at the National Retail Federation. The highest percentage — 38 percent — said in our poll that they did a combination of online and in-person shopping. Cullen said the 89.7 million Americans who shopped both ways often browse for goods online but pick them up in stores to avoid shipping fees.

“It’s not online versus offline anymore. People are shopping continuously from both channels,”
Cullen said.

An additional 29 percent of U.S. adults braved the malls, big box stores and boutiques without buying anything online.