Nearly 80 percent of Americans concerned lack of civility in politics will lead to violence, poll says

Days after a failed mail bomb plot and a deadly shooting at a Pittsburgh synagogue, most Americans say they are concerned that a lack of civility in Washington, D.C., will lead to violence, including acts of terror, according to the latest poll from the PBS NewsHour, NPR and Marist.

Approaching a crucial midterm election, 79 percent of Americans said they are concerned or very concerned that the negative tone of national politics will prompt violence. That concern was prominent across the political spectrum, with 92 percent of Democrats, 70 percent of Republicans and 79 percent of those who identify as independent all in agreement.

“You don’t get a consensus like that across party lines very often,” said Barbara Carvalho, director of the Marist Poll. 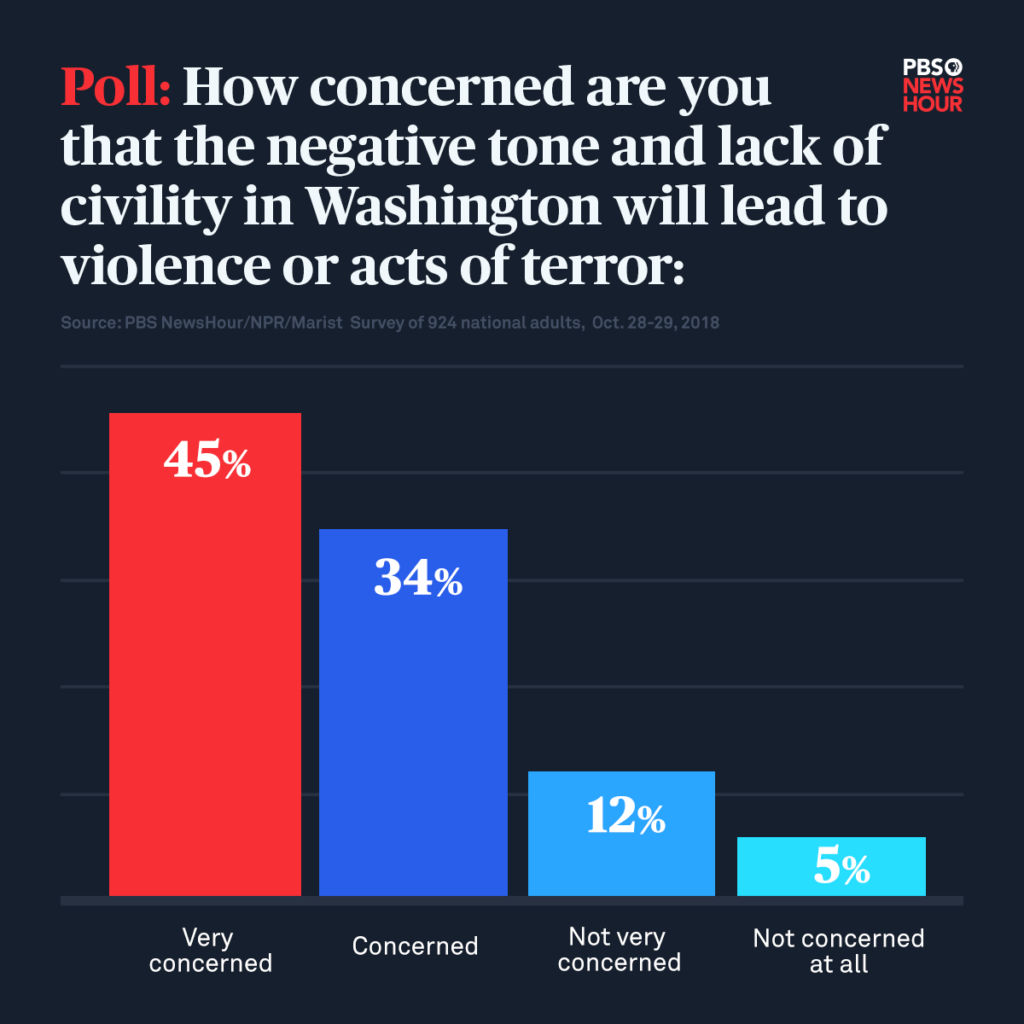 What Americans can’t agree on: who’s to blame. A plurality of Americans — 40 percent — point to President Donald Trump, and another 29 percent blame the media. An additional 17 percent held congressional Democrats responsible, while 7 percent blamed Republicans.

In the runup to this year’s high-stakes midterm elections, violent acts have added to a national sense of despair and frustration over how polarized the country has become.

According to the latest poll, nearly three-quarters of Americans — 74 percent — think the overall tone and level of civility in the nation’s capital have gotten worse since Trump was elected. That’s an increase from November 2017 when 67 percent of Americans said they felt that way about Trump. (In July 2009, after Barack Obama’s election, 35 percent of respondents said civility had gotten worse, according to Marist’s polling data.)

On Oct. 22, federal officials discovered the first of 15 improvised explosive devices mailed to prominent Democrats, including Obama and former Secretary of State Hillary Clinton, among other high-profile critics of Trump.

Authorities traced the packages to Cesar Altieri Sayoc, 56, of Aventura, Florida, a registered Republican and vocal supporter of Trump on social media. He’s been charged with illegal mailing and transporting explosives across state lines and threatening a former U.S. president, among other federal offenses.

Since then, and after the shooting in Pittsburgh, carried out by a man with a long trail of anti-Semitic postings online, critics have pointed to Trump’s incendiary and divisive rhetoric as a contributing factor. They say Trump’s habit of targeting political opponents, immigrants from certain regions and the media, from the nation’s top political office, could embolden people to embrace violence. White House Press Secretary Sarah Huckabee Sanders defended the president against that suggestion, saying those who carry out attacks — not the president — should be held personally responsible for their actions.

When asked by reporters whether he would adopt a more civil tone, Trump said he thought he had been toned down, and “could really tone it up because as you know, the media’s been extremely unfair to me and the Republican Party.”

In the poll, when U.S. adults were asked what factors primarily drive these acts of violence, more than a third — 37 percent — said they blame the way Trump conducts himself, and 21 percent pointed to the way the media reports news. An additional 12 percent of Americans said bickering between Democrats and Republicans motivated these violent acts, and another 23 percent of adults said none of these factors were to blame. A remaining 7 percent of people said they had no idea why these incidents were happening.

When asked about media coverage of the suspicious packages, half of Americans said journalists handled the story irresponsibly. That sentiment was particularly strong among Republicans (73 percent) and more than half of people who identified as politically independent (53 percent), while more than a quarter of Democrats (28 percent) agreed.

Similarly, 52 percent of the general public said Trump acted irresponsibly after the series of explosive packages was found. Sharp political lines were drawn among respondents with 83 percent of Democrats and 57 percent of independents saying the president was feckless in his behavior. Only 12 percent of Republicans said they felt the same.

Voters are significantly more energized going into this midterm election than they were in 2010, the first major election after Obama took office. More than half — 55 percent — of U.S. registered voters said they were very enthusiastic to go to the ballot box, compared to 40 percent of voters ahead of the 2010 midterms. A majority of Democrats and Republicans share that enthusiasm going into this election cycle, while politically independent registered voters are slightly less so.

What fuels that enthusiasm? The vast majority of U.S. voters — 76 percent — said this election is very important. At the same time, public disapproval of Trump’s job performance while in office remains steady, with 51 percent of U.S. adults saying they don’t like what he’s doing in the White House.

Left: President Donald Trump gestures to supporters as he finishes a campaign rally at the Mid-America Center on October 9, 2018 in Council Bluffs. Photo by Scott Olson/Getty Images.