More than half of Americans say they disapprove of how President Donald Trump has handled immigration, an issue that has deeply divided the country and one that may derail a year-end spending deal in Congress, according to the latest poll from the PBS NewsHour, NPR and Marist.

Fifty-two percent of U.S. adults surveyed disapproved of Trump’s actions on immigration. Another 44 percent of respondents said they approve of the president’s work on the issue, with an additional 4 percent saying they were unsure.

Support for Trump’s immigration policies underscores partisan divisions in the country: 91 percent of Republican respondents said they back the president on the issue, compared to just 42 percent of people who described themselves as politically independent and 14 percent of Democrats.

A majority of Americans — 57 percent — said Trump needs to compromise on the border wall.

When it comes to specific practices, more than half of U.S. adults said they disapproved of how the president has handled reunifying migrant children separated from their families at the U.S. border, as well as how he has handled undocumented immigrants who already live in the U.S.

Responses were mixed when people were asked about Trump’s approach to border protection, as well as how he’s handled members of a migrant caravan from Central America, many of whom are trying to seek asylum in the U.S. There was also a mix of opinions about whether Trump should shut down the government if Congress does not fund a wall along the nation’s southern border with Mexico.

A majority of Americans — 57 percent — said Trump needs to compromise on the border wall, while 36 percent said they would rather see the government shut down than Trump back down from building the wall.

Political sparring over the issue does little to help Americans better understand how immigration may influence culture, security and the U.S. economy, said Ali Noorani, executive director for the National Immigration Forum. And national leaders have not stepped up to bridge divisions in this country on several issues, including immigration.

“The rhetoric leaves a growing number of Americans who have real questions about immigration with no place to go.”

Immigration is one of many issues on which heated political rhetoric has only inflamed the conversation and deepened divides between Americans, Noorani said.

“The hard right and hard left have come to love the rhetoric, but it does nothing for a lot of Americans,” he said. 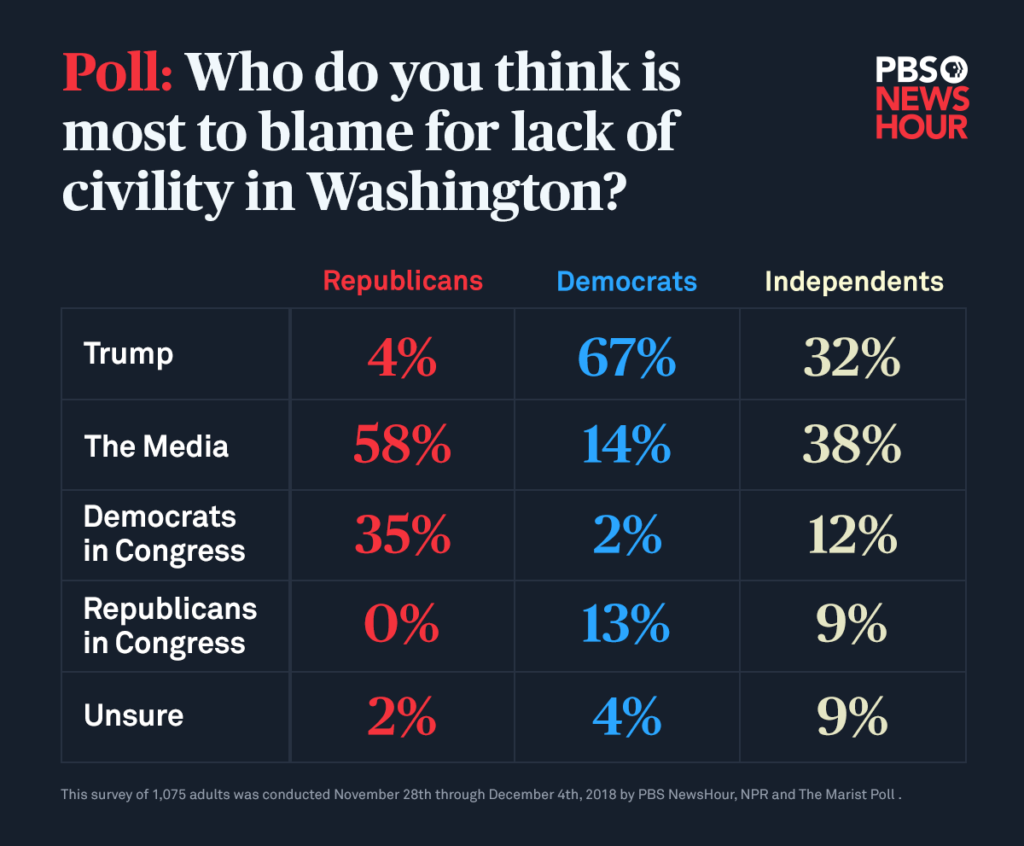 According to the latest poll, 52 percent of U.S. adults don’t support the idea of political correctness.

This number has dipped slightly over the last decade. In October 2010, a poll from Fox News and Opinion Dynamics found that 56 percent of Americans were not in favor of political correctness while 28 percent said they were.

In the Newshour-NPR-Marist poll, 76 percent of Republicans said they oppose political correctness, in agreement with 53 percent of people who identify as politically independent. In contrast, more than half of Democrats — 55 percent — said they support people speaking with more consideration for others.

“Democrats are the ones saying, ‘We have to really be careful about what we’re saying and not offend people,’ but Republicans and Independents are feeling constrained and think political correctness takes it a step too far,” said Lee Miringoff, the director of the Marist Institute for Public Opinion.

“The rhetoric leaves a growing number of Americans who have real questions about immigration with no place to go.”

Joshua Hughes, a 35-year-old conservative from Helena, Montana, illustrates that trend. An avid fan of controversial social conservative firebrands Ann Coulter and Gavin McInnes, whose commentary is often described as racist, Hughes said he blames the media for how polarized the nation has become and believes political correctness drives people apart. Hughes also said he believes conservative political opinion is stifled, citing a speech Coulter was scheduled to give last year in Berkeley, California, that was canceled after protesters rallied against the event.

“Anybody conservative isn’t allowed a voice,” said Hughes, who drove from Montana to Berkeley to see Coulter speak.

Sylvia Patterson, a 53-year-old Democrat from Nashville, Tennessee, said she sees things differently. Patterson said she thought Trump makes “racist” statements that have empowered people who are racist to take violent action against others who hold different opinions.

“People are getting beat up for their political views,” she said. “That’s crazy.”

The poll found that 70 percent of Americans believe civility between Republicans and Democrats has worsened since Trump took office. Only 5 percent of U.S. adults said it has improved.

What’s fueling the incivility? Public opinion is split: 37 percent of U.S. adults said the media has worsened civility in Washington, and 35 percent blamed Trump. Another 13 percent said Democrats in Congress are at fault, and 8 percent said Republicans are responsible for the strained political discourse.

In addition, 68 percent of Americans think people are less respectful of each other today than they were a few years ago, an idea shared by a majority of Democrats, Republicans and Independents. Only 5 percent of all respondents said people are more respectful today.

“We’re all left to react to what the other side is saying.”

And with the 116th session of Congress scheduled to begin Jan. 3, a plurality of Americans — 41 percent — do not foresee the national dialogue improving. Just 20 percent of U.S. adults think things will get better, while 35 percent said the current sharply partisan tone and lack of civility between Republicans and Democrats will remain the same in the new Congress.

“What is discouraging about this moment in time is that leadership to a large degree on both sides of the aisle is making very few efforts to reach across these divides,” he said. “We’re all left to react to what the other side is saying.”

Left: A boy and father from Honduras are taken into custody by U.S. Border Patrol agents near the U.S.-Mexico Border on June 12, 2018 near Mission, Texas. Photo by John Moore/Getty Images