The intersection of prayer and sports has been especially prominent in the aftermath of Damar Hamlin’s frightening collapse during an NFL game.

All 32 NFL teams have included “Pray for Damar” on their Twitter avatars. ESPN’s Dan Orlovsky prayed for the Buffalo Bills’ safety on live TV. Countless fans and other concerned observers said on social media they were praying, and dozens linked arms outside his Cincinnati hospital.

“In commemorating life or death in sport, people say pray, pray, pray a lot,” said Julie Byrne, chair of the Religion Department at Hofstra University. “I don’t think it reaches the pitch that you have here because of the incredibly dramatic circumstances. But it’s a pretty go-to response.”

It was amplified in Hamlin’s case partly because people now can offer instant expressions of prayer or any other reaction on social media. Plus, it was a high-profile “Monday Night Football” game between Hamlin’s Bills and the Cincinnati Bengals with millions watching or getting alerts about the alarming incident on their phones.

Hamlin’s heart stopped after making what appeared to be a routine tackle in the first quarter. The second-year pro went into cardiac arrest and was resuscitated on the field.

On Friday, the 24-year-old Hamlin was breathing on his own and able to talk after having his breathing tube removed, his agent said.

Players from both teams knelt on the field in prayer, not an uncommon scene in a sport that has seen plenty of scary injuries. Each week after every game, many players from both teams join together in a prayer circle, holding hands and kneeling; 63 percent of adults in the United States identify as Christians with 45 percent saying they pray daily, according to the Pew Research Center.

The expression of faith has been carried out very publicly in Hamlin’s case.

“It is new in terms of the scale and the scope,” said Paul Putz, assistant director of the Faith & Sports Institute at Baylor University. “It’s not common to see someone on a national television network who opens in prayer or just issues a prayer during the broadcast. That certainly is something that’s new, but it also does reflect this broader Christian subculture in the NFL.”

Orlovsky, a former NFL quarterback, prayed for Hamlin during Tuesday’s NFL Live broadcast as his two co-hosts bowed their heads and said “Amen” when he was done.

Afterward, Orlovsky told the AP in a text: “It was on my heart. The more we pray, the more Damar may come out of it.”

“I’m a Christian man to begin with and I’m not afraid to say that, and I know when you are trying to do good things or great things, sometimes you come across opposition,” McDermott said when asked about the team’s ability to respond to adversity.

“My greatest fear flashed in front of me in the moment but for the goodness and grace of God, Damar is still here,” Vincent told the AP in a text. 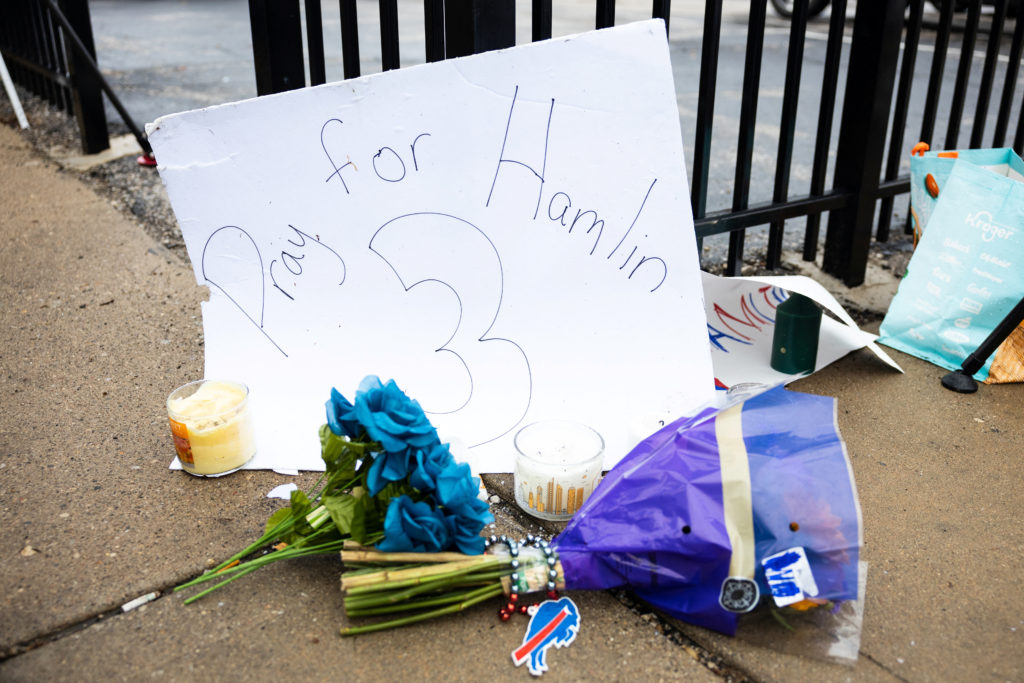 Items placed by football fans are seen during a vigil outside the University of Cincinnati Medical Center where Buffalo Bills safety Damar Hamlin lies in critical condition, after suffering a cardiac arrest during the Jan. 2 NFL game against the Cincinnati Bengals, in Cincinnati, Ohio, Jan. 3, 2023. Photo by Megan Jelinger/REUTERS

Jeffrey Scholes, associate professor of religious studies at the University of Colorado at Colorado Springs, said he hasn’t seen such a public outpouring of prayer in any sport.

“Dan Orlovsky breaking out in prayer was just kind of stunning,” said Scholes, who has written several books on religion and sports. “I’ve never seen anything like that. It looked more like the 700 Club than it did ESPN for a bit there.”

He said football has always been more closely tied to faith than other major sports. Plus, it was a big game among two of the top AFC teams and it was far from a standard injury.

“I think that the amount of prayer around this event makes a little more sense in that this event was so rare, disturbing, traumatic for those watching, for the players, for the coaches,” Scholes said. “I think a call for divine intervention via prayer is more expected.”

Chuck Hughes is the only NFL player to die on the field. The 28-year-old Detroit Lions wide receiver suffered a fatal heart attack late in a game against the Chicago Bears on Oct. 24, 1971. Putz said later newspaper accounts wrote of the players praying in their locker rooms.

“We didn’t have the public processing of (Hughes) in real time,” the Baylor professor said. “It wasn’t something millions of people were engaged with at the same time.

In 1971, Chuck Hughes — people were responding with prayer,” he added. “In 2023 when this happens with Hamlin, people responded with prayer again. But now, it’s amplified and scaled up because of the way social media works.”

Putz himself focused on praying and not trying to analyze the overtly prayerful response from a historian’s perspective. Time will tell if it’s a new normal in the social media world.

“I think over time then we’ll come to realize what this signified, what it highlighted about the ongoing connection between religion and sports, which have been going on for a long time,” Putz said.

Left: Football fans pray outside the University of Cincinnati Medical Center after Buffalo Bills safety Damar Hamlin collapsed on the field during the NFL Monday Night Football showdown with the Bengals in Cincinnati, Ohio, Jan. 2, 2023. Photo by Cara Owsley/USA Today Network via REUTERS