The step came as hundreds of conservative activists, including some who were openly carrying guns, returned to the Capitol to denounce her stay-at-home order.

Whitmer wanted lawmakers to extend her emergency declaration by 28 days. It expires late Thursday. But at the same time, she believes she has other powers to respond to the crisis and does not need a legislatively-approved extension except to ensure that health care workers would continue to have special legal protections. She has said the state of emergency will continue regardless.

The declaration is the foundation for Whitmer’s stay-at-home measure, which will remain in effect through May 15, and other directives aimed at slowing the spread of the coronavirus. It has infected more than 41,000 Michigan residents and contributed to the deaths of 3,789. The virus and the steps taken to curb it, including the closure of nonessential businesses, have had a devastating effect on the economy.

The House voted 59-41, along party lines, for a bill that would temporarily codify many of Whitmer’s orders but not her stay-at-home directive. Restaurants could begin dine-in service on May 16, when bars, casinos, gyms and other places of public accommodations also could reopen.

Businesses open to the public would have to adhere to social distancing and other mitigation measures until May 30. The state Senate remained in session to consider the legislation despite a certain veto by Whitmer. 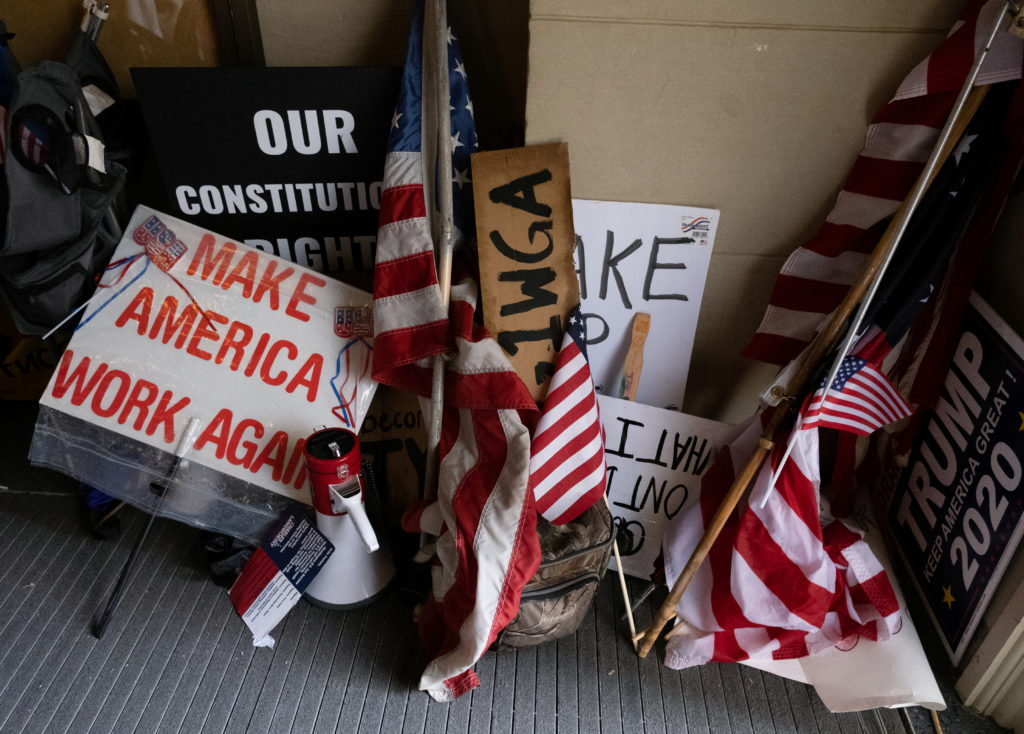 Protesters leave their flags and signs at the entrance of the state capitol building after protesters occupied the building during a vote to approve the extension of Governor Gretchen Whitmer’s emergency declaration/stay-at-home order due to the coronavirus disease (COVID-19) outbreak, at the state capitol in Lansing, Michigan, U.S. April 30, 2020. REUTERS/Seth Herald

House Speaker Lee Chatfield, a Levering Republican, said the death toll is “terrible,” but other lives have been “negatively impacted unnecessarily because of how we have handled this pandemic. We believe we you can prioritize public health yet be reasonable in your approach to fighting COVID.”

Democrats opposed the legislation and the pending legal action.

“We cannot win this fight with our hands tied behind our backs,” said state Rep. Tyrone Carter, a Detroit Democrat who recovered from COVID-19. “We must ensure that our state can respond quickly and decisively to a situation that changes day by day. That means ensuring that our governor has the emergency powers necessary to lead us in this fight.”

Outside the Capitol, speakers took turns addressing a crowd on the lawn. Meanwhile, drivers leaned on their horns as they traveled past, a repeat of what occurred April 15 but not close to the thousands who participated in vehicles at that time, which paralyzed traffic for miles.

Protesters’ placards read, “Shut down the lockdown,” “No work no freedom,” and “Tyrants get the rope.” Some people wore the “Don’t Tread On Me” flag as a cape. Others chanted, “Lock her up,” in reference to the governor. Some wore President Donald Trump’s “Make America Great Again” hats or carried signs supporting him.

“The virus is here. It’s going to be here. … It’s time to let people go back to work. That’s all there is to it,” said Joni George, of Flushing.

Some angry protesters — many without face coverings — entered the Capitol and demanded to be let onto the House floor, which is not allowed. The gallery was closed to the public to allow room for representatives and reporters to spread apart. Several demonstrators in the Senate gallery were openly carrying guns, which is legal in the Statehouse. One state senator said the armed men shouted at her, and several senators wore bulletproof vests for protection.

Shanon Banner, a state police spokeswoman, estimated there were 400 to 700 protesters and said they were “peaceful” overall. People who did not wear masks or distance themselves were not issued tickets. One demonstrator was arrested for assaulting another protester.

Whitmer, whom the public has supported in polling, on Wednesday rejected state Senate Republicans’ proposal for a pair of one-week extensions of the emergency in exchange for giving legislators a say in any future stay-at-home restrictions.

Republicans want her to allow elective medical and dental procedures again and certainty on the date she plans to reopen the economy on a regional basis. Meanwhile, the governor has allowed some businesses, such as lawn-care companies and greenhouses, to resume operating.

Whitmer said Wednesday that Republicans “are acting as though we’re in the midst of a political problem. … This is a public health crisis.” Commercial and residential construction will resume next week.

Left: Protesters rally outside of the state capitol building before the vote on the extension of Governor Gretchen Whitmer's emergency declaration/stay-at-home order due to the coronavirus disease (COVID-19) outbreak, in Lansing, Michigan, U.S. April 30, 2020. Photo by Seth Herald/Reuters.