Gwen Ifill, a journalist to her core, who served as the PBS NewsHour’s co-anchor and managing editor and, in her own words, sought to always “tell the stories that shed light and spur action,” has died from complications of cancer. She was 61.

Gwen covered eight presidential campaigns, moderated two vice-presidential debates and served for 17 years on the NewsHour and as moderator and managing editor of “Washington Week.” In her early career, she covered politics and city hall for some of the country’s most prominent newspapers, including the New York Times, the Washington Post and the Baltimore Evening Sun, carving a path as one of the most accomplished journalists in U.S. media. She won countless awards, including the George Foster Peabody Award and the National Press Club’s Fourth Estate Award, and was the best-selling author of “The Breakthrough: Politics and Race in the Age of Obama.”

“She was a standard bearer for courage, fairness and integrity in an industry going through seismic change,” said the NewsHour’s executive producer, Sara Just. “She was a mentor to so many across the industry — a journalist’s journalist who set an example for all around her.”

And from her co-anchor, Judy Woodruff: “She was not only my dear friend, she was the best partner one can imagine, because she was committed to fairness and to the finest in journalism. You always knew when working with Gwen that she had your back. I’m crushed that she won’t be sitting by my side on the NewsHour any more, but her mark on this program and on American journalism will endure.”

President Obama touched on Gwen’s death at a press conference on Monday, calling her an “extraordinary journalist” who “always kept faith with the fundamental responsibility of her profession.”

“I always appreciated Gwen’s reporting, even when I was at the receiving end of one of her tough and thorough interviews,” said Obama, noting that Gwen was one half, along with Judy Woodruff, of the first all-female anchor team in broadcast journalism.

He added, “She not only informed today’s citizens, but she also inspired tomorrow’s journalists.”

At the PBS NewsHour, Gwen brought abundant wisdom and guidance to daily editorial meetings, championed stories that likely would have been orphaned on other news networks and always challenged her colleagues to look past simple explanations to uncover the deeper realities behind the news, especially when faced with a difficult or elusive subject.

“I wanted to be a journalist, because I like to ask questions,” Gwen said in a 2009 interview with Julian Bond for the Explorations in Black Leadership Series. “And I like the idea that someone might feel responsible for answering them.”

Moderating the 2004 vice-presidential debate, Gwen demonstrated her knack for bringing forgotten issues to the center of the national discussion. After pressing Vice President Dick Cheney and Democratic vice-presidential nominee John Edwards on the economy, Iraq and Iran, she turned to the issue of the startlingly-high rate of HIV/AIDS among black women in America. 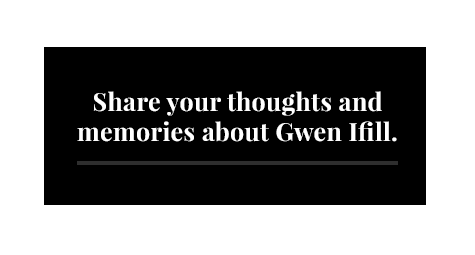 “I want to talk to you about AIDS — and not about AIDS in China or Africa — but AIDS right here in this country,” she said. “Black women between the ages of 25 and 44 are 13 times more likely to die of the disease than their counterparts. What should the government’s role be in helping to end the growth of this epidemic?”

After describing the epidemic as “a great tragedy” against which America had “made great progress,” Cheney admitted he wasn’t aware of the data about black women in America.

In moments big and small, and in the field and on camera, she combined journalistic integrity with a deep humanity, especially when talking directly to the people behind the story. Gwen prided herself on always considering “that someone else may have a better point.”

“By nature, I am someone who hews to the middle,” she wrote in a NewsHour column last December. “I need to hear all sides of a story. Unless I am engaged in a tough round of dominoes or Scrabble, I think of myself as unreasonably reasonable.”

Gwen’s leadership guided the NewsHour through multiple transitions, difficult stories and a constantly changing media landscape. But no matter how much the media changed, Gwen remained staunchly committed to her core values.

“In the early days, they joked that we dared to be boring,” Gwen said of the NewsHour in a recent Reddit Ask me Anything chat. “I think now it’s more that we dare to be engaging. And we think enough of the viewers and consumers who come to us for in-depth, fair coverage to make sure we provide cogent, smart analysis. We do it every day, go to sleep, and get up to do it again.”

Gwen Ifill was born on Sept. 29, 1955, in New York City. She was the fifth child of Urcille Ifill Sr., an African Methodist Episcopal pastor and civil rights advocate who immigrated to the United States from Panama, and Eleanor Ifill, an immigrant from Barbados.

During Gwen’s childhood, her family moved around New England and the Northeast for Urcille Ifill’s ministry, with stops in Massachusetts, Pennsylvania, and Buffalo, New York.

Gwen attended Simmons College in Boston, and it was there that she took her first steps toward a career in journalism. Gwen interned at the Boston Herald-American as an undergraduate in the late 1970s, where, despite facing racist threats in the newsroom, went on to work for the newspaper after graduation.

“When I got in, I had to prove to them that I could write, that I could meet a deadline, that I could be a good colleague in a newsroom, in a newsroom environment where, once again, I was one of very few people of color,” Gwen said in the 2009 Julian Bond interview. “Just getting in the door isn’t enough.”

From there, Gwen went on to work for the Baltimore Sun. She joined the Washington Post in 1984, and worked there until 1991, when she was hired by the New York Times. Gwen served as the Times’ White House Correspondent from 1991 to 1994, and as NBC’s chief congressional and political correspondent from 1994 to 1999.

Karen Tumulty, a national political correspondent at the Washington Post and longtime friend of Gwen’s, recalled meeting her for the first time, during the 1988 presidential campaign.

“She was a very young reporter at the time,” Tumulty said, but “she just had this kind of self assurance and ability to get right to what the truth was. It was really remarkable.”

As she climbed the ranks in the journalism world, Tumulty added, Gwen never lost her sense of humor or her ability to connect with people in all walks of life.

“She certainly made her mark in print journalism. But there was just something about her on television. People could really connect with her,” Tumulty said. She added, “Gwen was somebody who could find something to laugh about in just about any situation.”

Gwen took over as moderator of Washington Week in 1999, which was then known as Washington Week in Review, and began to regularly contribute to The NewsHour with Jim Lehrer. In 2013, she joined Judy Woodruff as co-anchor and managing editor of the PBS NewsHour, the long-format news program originally founded by Jim Lehrer and Robin MacNeil.

Gwen loved all music, especially gospel, rock and show tunes, and was especially smitten with the Broadway show, Hamilton. She was a connoisseur of Maryland crabs and always had a jar of Twizzlers in her office that she shared with staff.

In a 2015 interview with the Washingtonian, after winning an award from the magazine, Gwen summed up the importance of journalism:

“We can’t expect the world to get better by itself,” she said. “We have to create something we can leave the next generation.”

We will miss her.