People in Berkeley and San Francisco for the most part celebrated the cancellation of two right-wing rallies until a gathering turned tense in Berkeley on Sunday afternoon.

The Oregon-based group Patriot Prayer had been granted a permit by the National Park Service to hold a rally at 2 p.m. PST at Crissy Field in San Francisco on Saturday, under the conditions they did not wear helmets nor bring guns or anything else resembling weapons. Counter-protesters had also obtained three permits and planned two other rallies at the city’s Civic Center and in the Castro neighborhood.

And a woman had organized a “No to Marxism in America” rally in Berkeley’s Civic Center Park for Sunday, despite the city’s denial of a permit.

But on Friday evening, Patriot Prayer founder Joey Gibson said on Facebook that he was changing the rally’s location to Alamo Square and that it would instead be a news conference. After local law enforcement Saturday morning fenced and closed Alamo Square, turning people away, Gibson told the NewsHour Weekend that he would instead hold the news conference indoors and then pop up throughout the city to talk to residents.

And Amber Cummings, who had organized Berkeley’s rally, also canceled the event in Berkeley on Sunday, citing fear for everyone’s safety.

Still, hundreds of counter protesters showed up to the various rallies, some in vibrant costumes, with music and bubbles and signs, relishing what they saw as a success.

Hina Shah, an immigration lawyer, was having a picnic with her two children in San Francisco’s Civic Center on Saturday when she told KQED, “This is about us as people of color … We can’t stand by and do nothing.” 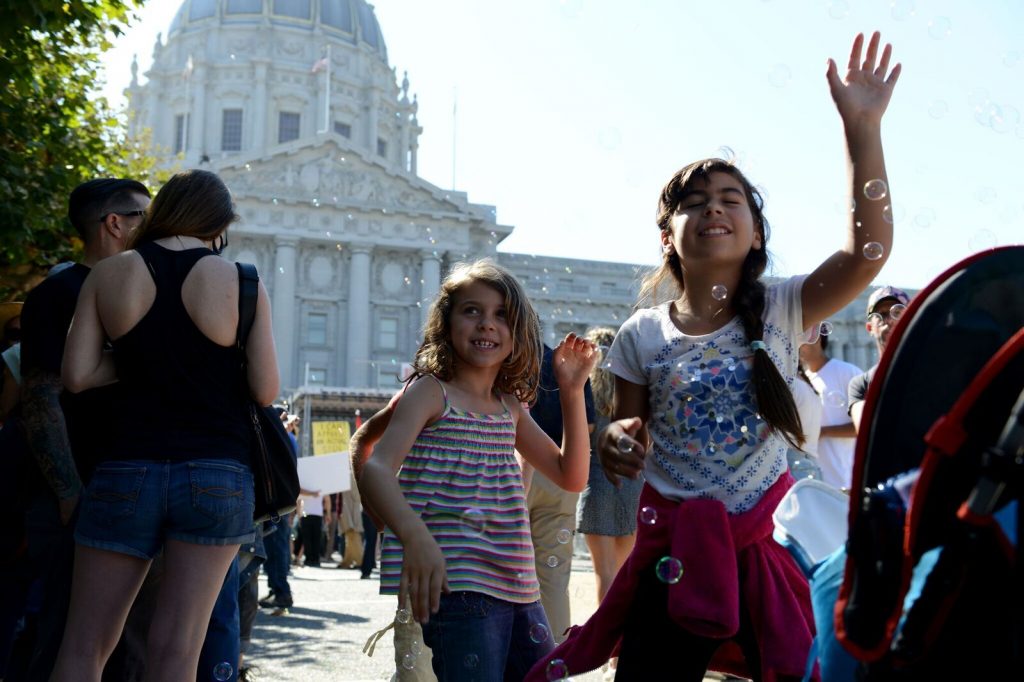 People celebrate in San Francisco’s Civic Center after a right-wing rally was canceled on August 27, 2017. Photo by Meredith Nierman

The scene was similar in Berkeley on Sunday morning local time, with left-wing protesters far outnumbering the right, but grew tense in the afternoon. Police were patting people down and checking their bags for items such as baseball caps, weapons or masks as they funneled into the park. Arguments began to escalate with physical contact, but police broke them up quickly.

When Gibson changed the plans at the last minute, Lee said he did not trust the group.

“We don’t trust this group. I never have from the beginning,” he told the Associated Press.

And while Gibson maintains that the group is promoting freedom of speech, not violence, nor is it flagged by the Southern Poverty Law Center, which tracks hate groups, its reputation has been tainted by past events in Portland.

In June, a two-hour “Freedom March” at Tom McCall Waterfront Park in Portland during a blues festival provoked fights.

Gibson has since denounced white supremacy and violence at his rallies, asking people looking for a fight not to come and then stating that he changed locations out of fear for people’s safety. But he also told the NewsHour Weekend that he agrees with a remark that President Donald Trump made, that “both sides” are to blame for violence, which is a message that has been celebrated by neo-Nazis and white supremacists.

“I agree with the fact that it is [extremists on] both sides that are to blame, absolutely. I think that’s just wisdom,” he said.

And Wiener issued a statement on Friday, saying that Patriot Prayer’s efforts to move the rally to an unpermitted, less secure location reinforced its reputation for encouraging violence.

My statement on extremists' decision to cancel permitted rally at Crissy Field and to hold an illegal, volatile rally at Alamo Square. pic.twitter.com/MtN2T2fvDt

Cummings has also denounced white supremacy and violence, but shortly after she set up an event on Facebook, Kyle Chapman, who has since been charged with having a lethal weapon and accused of starting brawls at alt-right and pro-Trump rallies, wrote on the page, “I’ll see y’all there!” A handful of people wrote positive comments under his post.

It has been two weeks since a car ran into anti-racist protesters in Charlottesville, Virginia, killing Heather Heyer in the aftermath of a white nationalist “Unite the Right” rally. And in those weeks, several people within Trump’s administration have issued statements or resigned, citing his failure to condemn white supremacists.

Last weekend, a planned rally by far-right group called Boston Free Speech was outnumbered by thousands of counter-protesters who alleged the group was promoting racism.

While San Francisco politicians on Saturday and the week prior used the national spotlight to denounce racism, hate and white supremacists, they did not use it to rail against the city’s own ongoing racial issues.

Twitter, Google, AirBnB, Pinterest, Uber and other tech companies based in San Francisco and Silicon Valley have brought highly-paid employees to the area, leading to skyrocketing real estate prices that have pushed out local businesses and especially minority residents. The black population has declined from a 1970 peak of 13.4 percent of city residents to about six percent, according to U.S. Census data from 2015, while activists claim it’s as low as three percent.

And the city has been under fire for the way its police force and justice system treats people of color.

The San Francisco Public Defender’s office recently commissioned a report that found nearly half of the city’s inmates are black.

And in May 2016, then-Police Chief Greg Suhr resigned after presiding over a series of controversies, including the exposure of racist texts by police and the fatal shooting of 26-year-old Mario Woods, whose family faced the foreclosure of his childhood home.

Woods was shot 20 times in San Francisco’s historic Bayview neighborhood, known in particular for its naval development ahead of World War II, which drew black, working-class builders during the Great Migration. Now, the foreclosure rate in that area is four times higher than the rest of the city, according to the SF Weekly.

Left: People celebrate in San Francisco's Civic Center after a right-wing rally was canceled on August 27, 2017. Photo by Meredith Nierman