At the end of the summer, it can sometimes feel like there’s nothing to watch on television. That’s especially true of sports.

Baseball season has been going on for five months — long enough to bore you–before you realize that there is still at least a month before playoffs happen. The NFL regular season is still more than a week away, and the NHL regular season isn’t going to start back up until October.

Fortunately for sports lovers, there is another option: women’s sports.

Yes, sometimes they are harder to find because women’s sports still receive less media coverage than men’s sports and games are often relegated to secondary channels. But if you search hard enough, you can normally find any game, match or tournament either through cable or a streaming device.

“This is a sweet spot right now for women’s sports in terms of coverage and interest,” USA Today sports columnist Christine Brennan said.

Surveys have shown many people find women’s sports more “inspiring” and less “money-driven,” according to a study from the ratings agency Neilsen.

But don’t do a one-to-one comparison of men and women’s sports, says Jerry Solomon, who developed the idea for the Aurora Games, an international women’s multi-sport competition.

People should “come to appreciate the style of play and the approach that women athletes have, which is very different than the men,” said Solomon, who also happens to be the husband of Olympic skater Nancy Kerrigan.

In basketball, for example, the fact that women are, on average, shorter than men means female players have to find other ways to score, rather than relying on their ability to force the ball inside the paint and dunk it.

There are plenty of women’s sports that you can watch right now. Here’s where to start.

The Women’s World Cup last month generated heightened interest both in the sport of women’s soccer and in the larger issue of equal pay.
ESPN has decided to air one National Women’s Soccer League (NWSL) game per week during the 2019 season, which is currently ongoing. Other networks are airing local games more frequently, depending on the viewer’s region.

Those games feature popular U.S. soccer players like Megan Rapinoe and Alex Morgan, not to mention other international greats like Brazil’s Marta and Australia’s Sam Kerr. 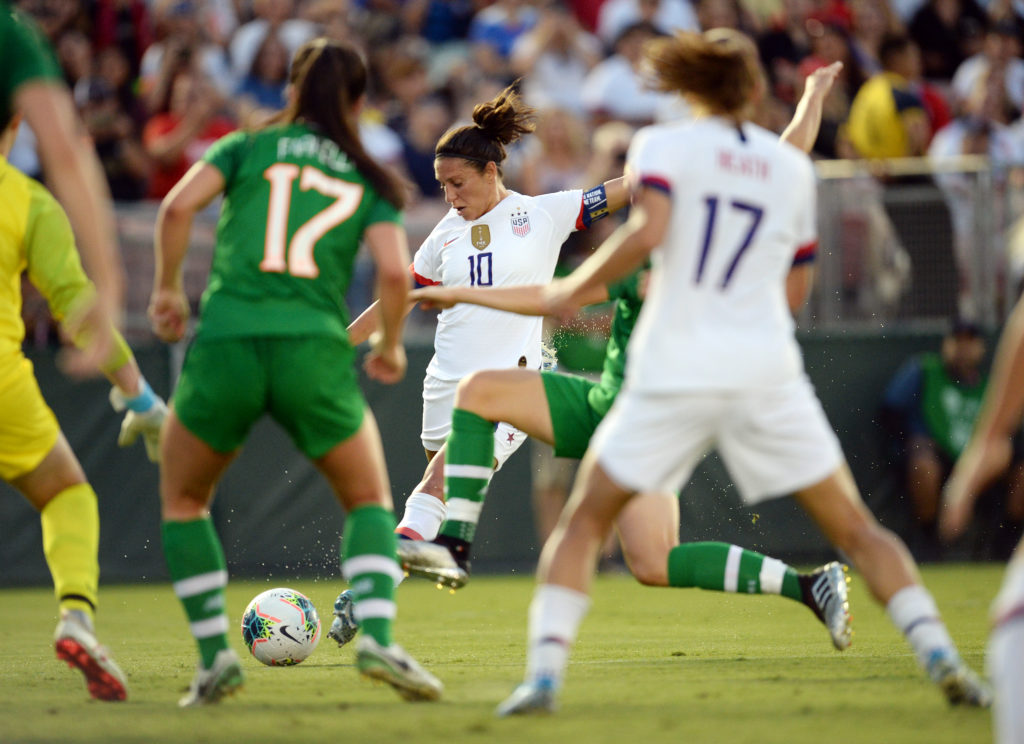 USA forward Carli Lloyd (10) moves in for a shot on goal against Ireland during the first half of the U.S. Women’s National Team Victory Tour soccer match at Rose Bowl on Aug 3, 2019 in Pasadena, California. Credit: Gary A. Vasquez-USA TODAY Sports

The U.S. women’s soccer team is also in the middle of its World Cup victory tour, which includes four more games from now through Oct. 6. The games are being broadcast on various ESPN and Fox Sports channels.

If soccer doesn’t pique your interest, the U.S. Women’s Open began in New York City this week, featuring tennis stars like Venus and Serena Williams as well as newer players like 15-year-old Coco Gauff and No. 1 ranked Naomi Osaka. 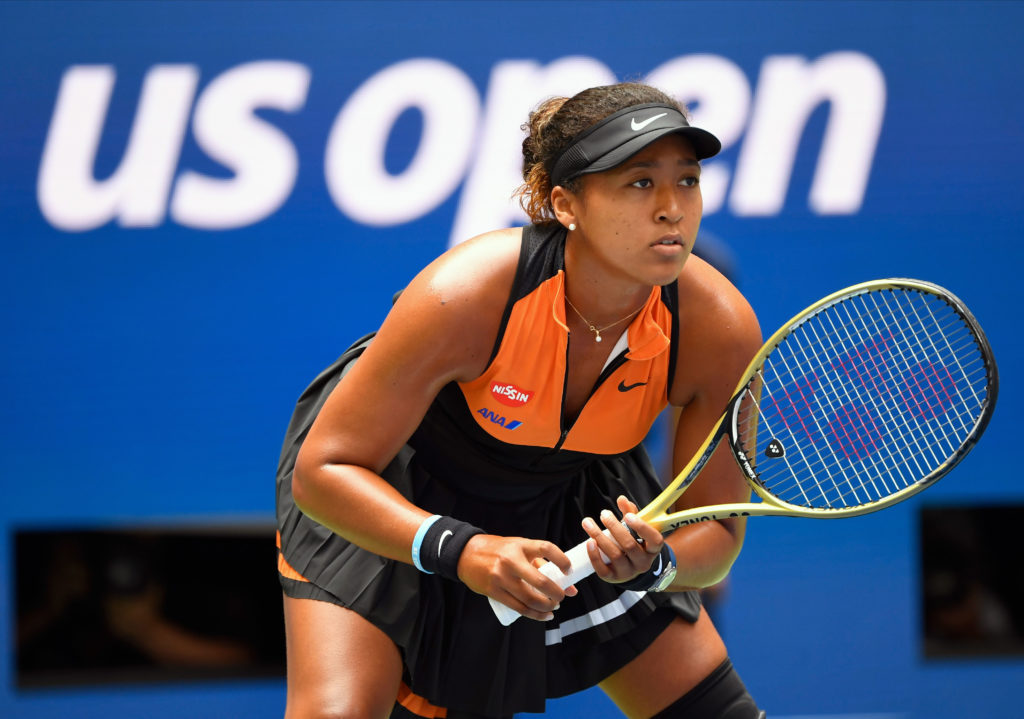 Naomi Osaka of Japan prepares for the serve from Anna Blinkova of Russia in the first round on day two of the 2019 U.S. Open tennis tournament at USTA Billie Jean King National Tennis Center ON Aug 27, 2019 IN Flushing, NY. Mandatory Credit: Robert Deutsch-USA TODAY Sports

“There seems to be a new energy in women’s tennis with these new names, and they will be around for quite a while,” Brennan said.

The WNBA is also nearing the peak of its season with playoffs set begin Sep. 11. There are 12 teams, so there’s a good chance you live in a place where you can root for the home team.

The Solheim Cup, which features the top female golfers from the U.S. and Europe, kicks off Sep. 13. And the Olympic trials in numerous sports are also ramping up ahead of the 2020 Summer Olympics in Tokyo. 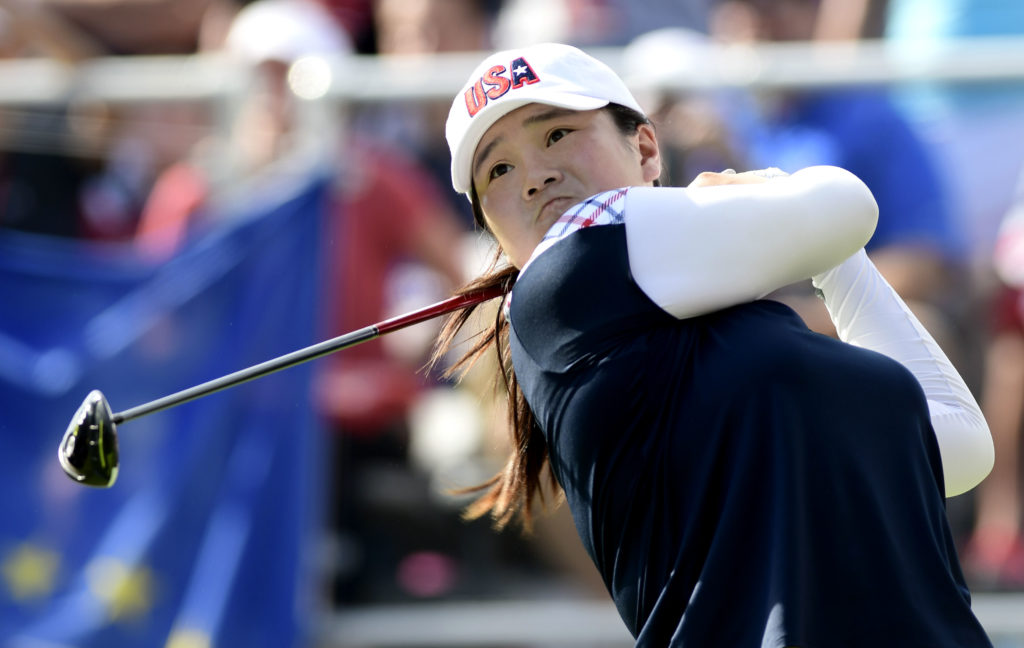 USA golfer Angel Yin tees off on the first hole in the final round of The Solheim Cup international golf tournament at Des Moines Golf and Country Club on Aug. 20, 2017. Yin will be part of the USA team in the 2019 Solheim Cup which begins Sept. 13. Credit: Thomas J. Russo-USA TODAY Sports

And, it’s worth nothing that even when the NFL takes over the prime television spots on Sunday, Monday and Thursday night, many of these sports will still be going on.

Off the couch and into the stands

Of course, you don’t just have to watch sports on TV. You can also go see many of these sports in person — something that Portlanders, who regularly sell out games to their professional women’s soccer team the Portland Thorns, don’t need to be reminded of.

Other women’s professional sports have struggled with attendance for various reasons, including games at oddly-timed hours and stadiums located outside of city-centers.

That lack of a fanbase can also contribute to lower player salaries. But the higher the demand for tickets, the more likely those games will be moved to prime-time and to top venues.

One last suggestion for those who don’t live in major cities with professional teams: Watch college sports. Field hockey, soccer and volleyball are on tap for the fall, and the ticket prices tend to be affordable, making them a good option for families.