FORT LAUDERDALE, Fla. — The Florida high school where a former student shot and killed 17 people with an assault-type rifle is reopening for teachers Friday as the community grappled with word that the armed officer on campus did nothing to stop the shooter.

That failure, plus reports of a delay in security camera footage scanned by responding police and several records indicating the 19-year-old suspect displayed behavioral troubles for years added to what the Florida House speaker described as an “abject breakdown at all levels.”

The Valentine’s Day shooting at Marjory Stoneman Douglas High School has reignited national debate over gun laws and school safety, including proposals by President Donald Trump and others to designate more people — including trained teachers — to carry arms on school grounds. Gun-control advocates, meanwhile, have redoubled calls for bans or further restrictions on assault rifles.

Teachers were told they could return to the school Friday to collect belongings from classrooms that have been off-limits since the slayings more than a week earlier. The school plans an orientation Sunday for teachers and students, and to restart classes Wednesday.

“Our new normal has yet to be defined, but we want to get back to it,” said geography teacher Ernest Rospierski, whose classroom is on the third floor of the three-story building attacked Feb. 14. Officials have said that building will be torn down.

History teacher Ivy Schamis was teaching a Holocaust class when the shooter fired into her classroom. She’s planning to return Monday to collect items from the room, including a big yellow banner that reads, “Never Again,” referring to the Holocaust. She wants it hanging in her next classroom. “That’s a Holocaust banner and now that’s what our slogan is becoming after this tragedy.”

The school resource officer on Feb. 14 took up a position viewing the western entrance of that building for more than four minutes after the shooting started, but “he never went in,” Broward County Sheriff Scott Israel said at a news conference. The shooting lasted about six minutes. 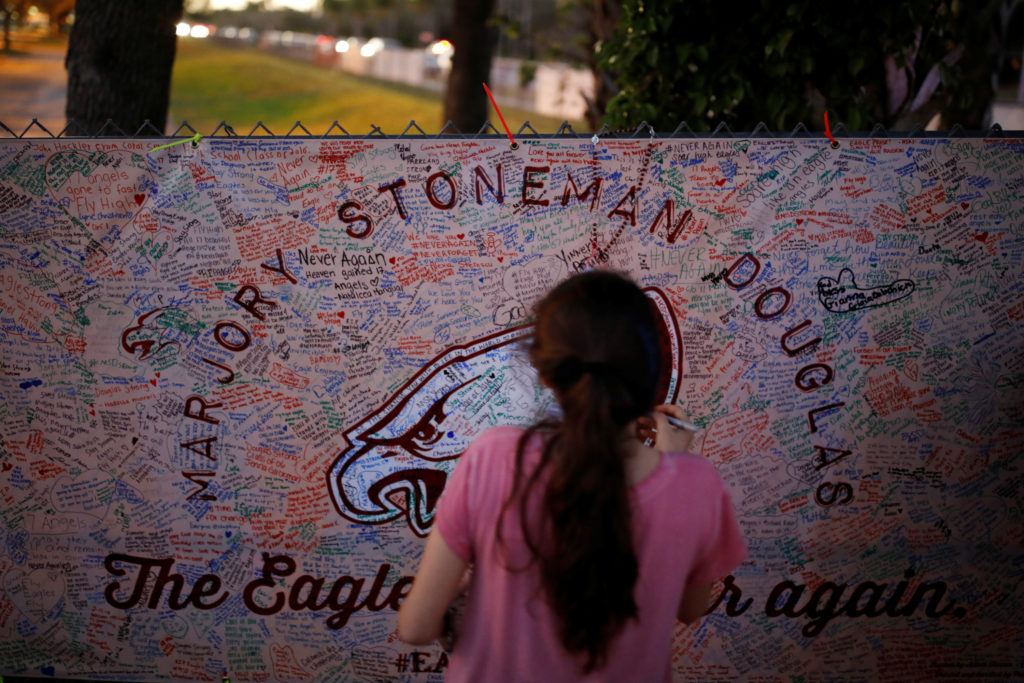 A girl writes a note on a banner placed on the fence of the Marjory Stoneman Douglas High School to commemorate the victims of the mass shooting, in Parkland, Florida. Photo by Carlos Garcia Rawlins/Reuters

A telephone message left at a listing for Peterson by The Associated Press wasn’t returned. An AP reporter who later went to Peterson’s home in a suburb of West Palm Beach saw lights on and cars in the driveway, but no one answered the door during an attempt to seek comment.

Meanwhile, new information has emerged that there was a communication issue between the person reviewing the school’s security system footage and officers who responded to the school.

Coral Springs Police Chief Tony Pustizzi said during a news conference Thursday that the footage being reviewed was 20 minutes old, so the responding officers were hearing that the shooter was in a certain place while officers already in that location were saying that wasn’t the case. Pustizzi said the confusion didn’t put anyone in danger.

Shooting suspect Nikolas Cruz, 19, has been jailed on 17 counts of murder and has admitted the attack, authorities have said. Cruz owned a collection of weapons. Defense attorneys, state records and people who knew him have described troubling incidents going back years.

Broward County incident reports show that unidentified callers contacted authorities with concerns about Cruz in February 2016 and November 2017. The first caller said they had third-hand information that Cruz planned to shoot up the school. The information was forwarded to the Stoneman Douglas resource officer. The second caller said Cruz was collecting guns and knives and believed “he could be a school shooter in the making.”

Also in November 2017, Cruz was involved in a fight with the adult son of a woman he was staying with shortly after his mother died, according to a Palm Beach County Sheriff’s Office report. On Nov. 28, a 22-year-old man at the Lake Worth home told the responding deputy the he tried to calm down Cruz, who had been punching holes in walls and breaking objects, but Cruz hit him in the jaw, and the man hit Cruz back.

The deputy found Cruz a short time later at a nearby park. Cruz told the deputy he had been angry because he misplaced a photo of his recently deceased mother, and he apologized for losing his temper.

The other man told the deputy he didn’t want Cruz arrested. He just wanted Cruz to calm down before coming home. 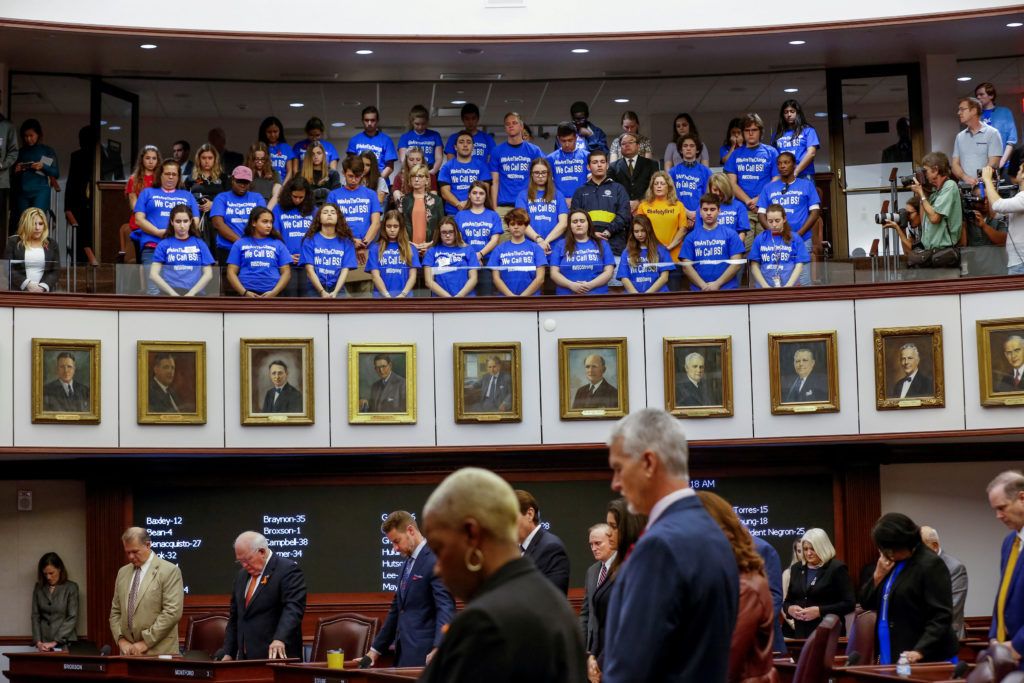 Students and their chaperones from Marjory Stoneman Douglas High School, wearing blue t-shirts, stand in the gallery above the Florida Senate as the Senate holds a moment of silence to honour the victims of last week’s mass shooting on the school’s campus, in Tallahassee, Florida. Photo by Colin Hackley/Reuters

Politicians under pressure to tighten gun laws in response to the mass shooting floated various plans Thursday, but most fell short of reforms demanded by student activists who converged Wednesday on Florida’s Capitol.

Florida House Speaker Richard Corcoran said Thursday night that his chamber is going to recommend creating a special commission to investigate the “abject breakdown at all levels” that led to the shooting deaths. The Republican said the commission, likely be led by a parent of one of the slain children, would have subpoena power.

Corcoran said the news about the resource officer’s failure to respond did not dissuade him from moving ahead with what he was calling the “marshal” plan to let local law-enforcement officials train and deputize someone at the school who would be authorized to carry a gun.

State Sen. Bill Galvano, who is helping craft a bill in response to the shooting deaths, insisted the idea is not the same as arming teachers. He said the program would be optional and the deputized person would have to be trained by local law-enforcement agencies.

U.S. Sen. Marco Rubio of Florida said a visit to Stoneman Douglas prompted him to change his stance on large capacity magazines. The Republican insisted he is willing to rethink his past opposition on gun proposals if there is information the policies would prevent mass shootings.

“If we are going to infringe on the Second Amendment, it has to be a policy that will work,” Rubio said in an interview Thursday with AP.

Left: A note is seen on the fence of the Marjory Stoneman Douglas High School following a mass shooting, in Parkland, Florida. Photo by Carlos Garcia Rawlins/Reuters

NRA backs Trump’s call for arming teachers: ‘Schools must be the most hardened targets’