WASHINGTON — President Donald Trump endorsed stricter gun-control measures Thursday, including raising the minimum age to 21 for possessing a broader range of weapons than at present. He tweeted his strongest stance as president one day after an emotional White House session where students and parents poured out wrenching tales of lost lives and pleaded for action.

Trump said on Twitter, “I will be strongly pushing Comprehensive Background Checks with an emphasis on Mental Health. Raise age to 21 and end sale of Bump Stocks!”

He did not immediately offer more details.

The current federal minimum age for buying or possessing handguns is 21, but the limit is 18 for rifles including assault-type weapons such as the AR-15 used by a former student in last week’s attack on a Florida high school that killed 17 students and staff members.

A White House official said the president was not endorsing or ruling out any specific policy.

In another tweet, Trump repeated his urgent call for trained teachers or others in schools to carry guns as a deterrent to attacks.

“If a potential ‘sicko shooter’ knows that a school has a large number of very weapons talented teachers (and others) who will be instantly shooting, the sicko will NEVER attack that school. Cowards won’t go there…problem solved. Must be offensive, defense alone won’t work!” Trump tweeted.

He has previously expressed an interest in efforts to strengthen the federal background check system. It was not clear if he would back closing loopholes that permit loose private sales on the internet and at gun shows.

On Wednesday, Trump listened intently at the White House as students described the horror of the shootings at Marjory Stoneman Douglas High School in Parkland Florida. The students and their parents appealed to him to press for stricter gun controls. 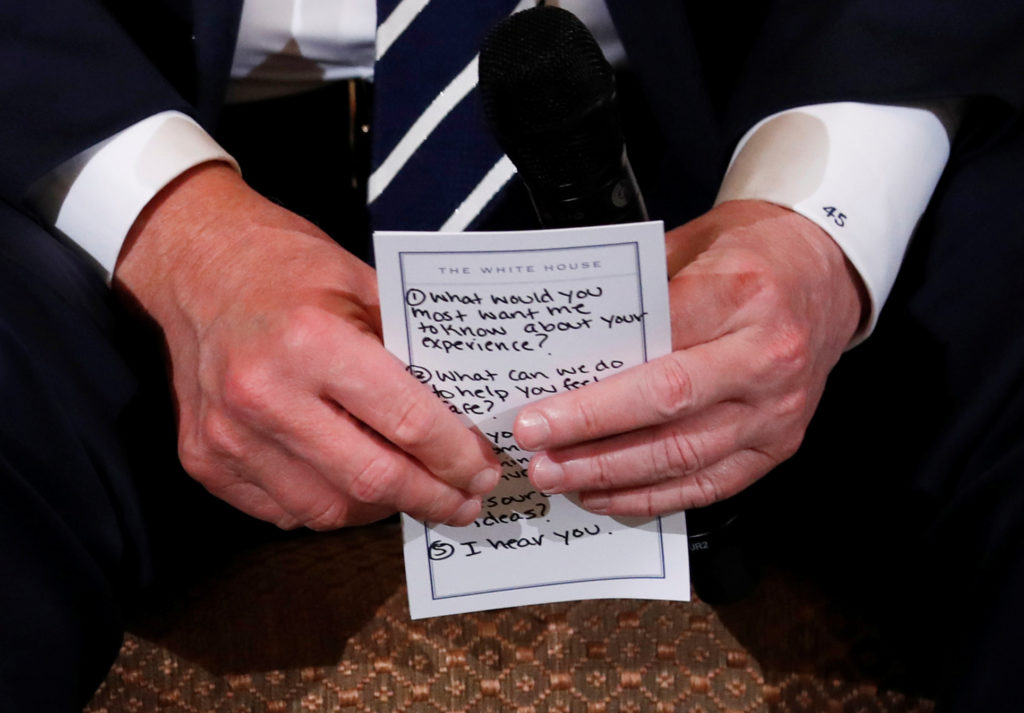 U.S. President Donald Trump holds his prepared questions as he hosts a listening session with high school students and teachers to discuss school safety at the White House in Washington, D.C., on Feb. 21, 2018. Photo by Jonathan Ernst/Reuters

“I turned 18 the day after” the shooting, said tearful student Samuel Zeif. “Woke up to the news that my best friend was gone. And I don’t understand why I can still go in a store and buy a weapon of war. An AR. How is it that easy to buy this type of weapon? How do we not stop this after Columbine? After Sandy Hook?”

Trump promised to be “very strong on background checks.” And he indicated he supported allowing some teachers and other school employees to carry concealed weapons to be ready for intruders.

The president had invited the teen survivors of school violence and parents of murdered children in a show of his resolve against gun violence in the wake of last week’s shootings in Florida and in past years at schools in Connecticut and Colorado.

Trump asked his guests to suggest solutions and solicited feedback. He did not fully endorse any specific policy solution, but pledged to take action and expressed interest in widely differing approaches.

He largely listened, holding handwritten notes bearing his message to the families. “I hear you” was written in black marker.

Besides considering concealed carrying of weapons by trained school employees, a concept he has endorsed in the past, he said he planned to go “very strongly into age, age of purchase.” And he said he was committed to improving background checks and working on mental health.

Most in the group Wednesday were emotional but quiet and polite.

But Andrew Pollack, whose daughter Meadow was killed last week, noted the previous school massacres and raged over his loss, saying this moment isn’t about gun laws but about fixing the schools.

“It should have been one school shooting and we should have fixed it and I’m pissed. Because my daughter, I’m not going to see again,” said Pollack. “King David Cemetery, that is where I go to see my kid now.”

A strong supporter of gun rights, Trump has nonetheless indicated in recent days that he is willing to consider ideas not in keeping with National Rifle Association orthodoxy, including age restrictions for buying assault-type weapons. Still, gun owners are a key part of his base of supporters.

The NRA quickly rejected any talk of raising the age for buying long guns to 21.

“Legislative proposals that prevent law-abiding adults aged 18-20 years old from acquiring rifles and shotguns effectively prohibits them for purchasing any firearm, thus depriving them of their constitutional right to self-protection,” the group said in a statement.

The people assembled for the White House meeting on Wednesday included parents of students killed in massacres at Columbine High School in Littleton, Colorado, and Sandy Hook Elementary in Newtown, Connecticut. Students and parents from the Washington area also were present.

Trump later tweeted that he would “always remember” the meeting. “So much love in the midst of so much pain. We must not let them down. We must keep our children safe!!”

Throughout the day Wednesday, television news showed footage of student survivors of the violence marching on the Florida state Capitol, calling for tougher laws. The protests came closer to Trump, too, with hundreds of students from suburban Maryland attending a rally at the Capitol and then marching to the White House.

Trump embraced gun rights during his presidential campaign, though he supported some gun control before he became a candidate.

READ NEXT: At shooting town hall, Rubio on the defensive on gun control

On Tuesday, Trump directed the Justice Department to move to ban devices like the rapid-fire bump stocks used in last year’s Las Vegas massacre. The White House has also said Trump was looking at a bill that would strengthen federal gun background checks.

But those moves have drawn criticism as being inadequate, with Democrats questioning whether the Justice Department even has authority to regulate bump stocks and arguing that the background check legislation would not go far enough.