NEW ORLEANS – Allison Cruz has three kids in public schools who are all already fully vaccinated. Two of them actually participated in COVID-19 vaccine trials for kids. So for her, since Louisiana already requires students to be immunized against viruses like polio, measles, mumps, and rubella, there’s no reason COVID-19 should be treated any differently.

“It’s perfectly safe and fine. This is the world we live in. Kids get vaccines for school, and this is part of it. I want schools to be safe and healthy places for kids,” said Cruz who has a four, eight, and 11-year-old. “It’s time to trust science, and we should do it because it’s the right thing to protect each other,” she said.

WATCH: Answering your questions on COVID vaccines for kids 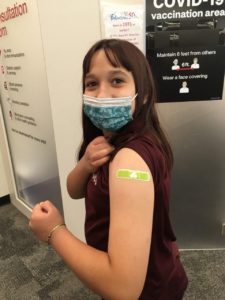 The Cruz family children participated in the Covid vaccine trials for children in New Orleans in August 2021. Photo by Allison Cruz

The debate around vaccine requirements for school children took center stage at the Louisiana State Capitol on Dec. 6 with parents and lawmakers passionately pushing back against a proposal by the Louisiana Department of Health to require the COVID-19 vaccine for most school children.

State health officials said exemptions are available, and the proposal is not a mandate.

Politics and growing political divides surrounding vaccines loom large across the country, but particularly in a state where the vaccination rate is still 36 percent in some areas, compared to the 49 percent statewide.

“The risk to these young people from COVID-19 is significant enough that the vaccine is warranted.”

If implemented, Louisiana would become only the second state to require vaccines for public school students. In October, California became the first state in the nation to announce COVID-19 vaccine requirements for schools.

Eleven-year-old Abigail Little from East Feliciana Parish took the day off from school to voice her opposition. “We should have the right to choose what goes in our bodies. If we don’t want to do that, it’s okay. If our parent doesn’t think it’s safe for us to have the vaccine then, I believe that it is our choice. Please say no,” she said.

After seven and a half hours of testimony, a Louisiana House panel on Dec. 6 overwhelmingly rejected the contentious COVID vaccine proposal for schools in a 13-2 vote, but the governor vowed to still move forward without their support. If Gov. John Bel Edwards overrides the House Health and Welfare Committee’s action, the new rules could be in place by next fall.

Opponents like Clay Schexnayder, speaker of the Louisiana House of Representatives, tried to block it, calling it “government overreach.”

“I never imagined before COVID that I’d have to come forward and take a stand against an administration on mandating a shot for school-aged students against the will of their parents, but that’s where we are,” Schexnayder said. “It is not the same as other vaccinations and should not be treated as such. There is only one reason that this is being rushed into place. It’s simply politics.”

If it takes effect, the initial rollout of the vaccination requirement would only apply to age groups for whom the U.S. Food and Drug Administration has given full approval of the immunization. Currently, that’s only high school students ages 16 and older. State health officials testified that the vaccine requirement, for them, is about saving lives. 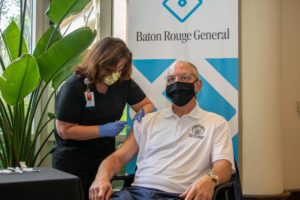 “The vaccines available are a true gift. This rule change is a priority for the Department of Health because we believe the loss of life endured throughout the 21 months of this pandemic – and particularly the loss of young life – has simply been untenable,” said Dr. Joseph Kanter, head of the Louisiana Department of Health. “A total of 18 children have died with COVID-19 in Louisiana. Of those, nine children died during our recent Delta surge. Many more have been hospitalized.”

Last week in advance of the oversight hearing, Gov. Edwards was preparing for the backlash. Edwards says 25 percent of all known cases in Louisiana are in children 18 or younger and he believes the number is understated due to a lack of testing on young people. Edwards says requiring vaccinations is a necessary action to control the spread of the virus.

“The risk to these young people from COVID-19 is significant enough that the vaccine is warranted,” Edwards said at a news conference on Friday, Dec. 3. “I just think it’s really, really important to embrace the science and really it’s also important to not engage in misinformation. Absent some compelling reason, which I at present have not seen, I fully expect that we will be adding the vaccine to the schedule.”

Louisiana has some of the broadest exemptions in the nation for students and parents who want to opt out of school immunization requirements, with either a letter from a medical provider or a simple signature in dissent by the person who is subject to the vaccine requirement. Currently, exemptions are allowed for religious reasons, medical reasons, and even philosophical objections. Still, the committee room was packed with people primarily opposing the plan.

“It feels like we’re losing all of our rights,” said Ashley Rivera, who has five children in public schools. ”Our children do not have a voice in any of this tyranny and we’re here united to be their voices.” 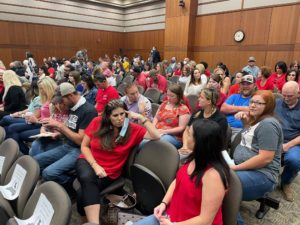 Maskless parents interrupt state education meeting on mask mandates in Louisiana Schools on August 18, 2021. The meeting was adjourned because of disorderly conduct by spectators. Photo by Erika Ferrando/WWL

Suzanne Rose, a parent, said she still doesn’t trust the science. “I have the choice and it should remain mine, whether I chose to give this experimental COVID shot to my child or not because my child is a healthy 12-year-old boy. I’m not willing to risk his future,” she said.

Rigorous clinical trials have demonstrated that the COVID vaccines are safe and effective. While mild, short-term side effects (like a sore arm) are possible, the health risks from being unvaccinated and contracting the virus are far more serious.

“We need to encourage and promote their use while continuing to respect the tradition of parental autonomy.”

Health officials pushed back against suggestions that COVID-19 isn’t a significant threat to children and that the vaccines are experimental.

“Vaccines are the single best tool we have to fight back,” Kanter said. “We need to encourage and promote their use while continuing to respect the tradition of parental autonomy, which has served us well in Louisiana to date.” 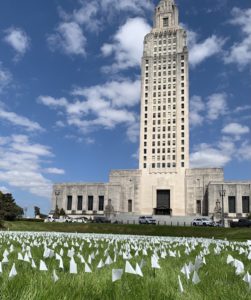 Nearly 10-thousand white flags are placed on the lawn of the Louisiana Capitol in March 2021 to represent each person in the state who has died of Covid since the pandemic began. Photo by Louisiana Department of Health Staff

In an op-ed, last weekend published in The Advocate, Louisiana’s largest newspaper, Dr. Mark Kline, chief medical officer at Children’s Hospital New Orleans said “the vaccine requirement for students is just common sense.” Kline pushed for more vaccines among kids, writing, “Sadly, we are off to a distressingly slow start in vaccinating young children against COVID-19. Three weeks in, we have vaccinated 946 children aged 5-11 years at Children’s Hospital New Orleans, but across Louisiana, fewer than three percent of children in that age group have received their first vaccine dose, ranking us among the bottom three nationally (with Mississippi and Alabama). We have got to do better.” Nationally, more than 2 million children, or  7 percent of kids ages 5-11, got their first shot.

The fate of the plan seems likely to be decided by the courts, with Republican Attorney General Jeff Landry and the Democratic Edwards administration at odds over whether the coronavirus vaccine requirement can be legally enacted by the governor without support from the full state legislature. Landry brought a well-known anti-vaccine activist, Bobby Kennedy, Jr., to testify with him.

“This proposed rule has no merit. I’m advising you that the proposed LDH plan to promulgate adding COVID-19 vaccines to the list of required immunization for school entry is not permitted under state law,” Landry told the committee on Monday. “I’m asking you to take back the police powers of this state. We cannot allow the executive branch to bypass the constitutional responsibilities of this legislature by allowing them to create policy in law using executive [order].”

Cruz told the PBS NewsHour that she is angry with that kind of talk from elected officials and says “it’s a dereliction of duty.” For her family, it’s a way to keep kids in school and she applauds Edwards for taking a tough stand.

“I’ve been so pleased with the governor for this whole pandemic. He’s been reasonable and he’s been doing his best in a terrible situation,” Cruz said.  “I feel grateful that he’s willing to take some political suicide from constituents to do the right thing.” 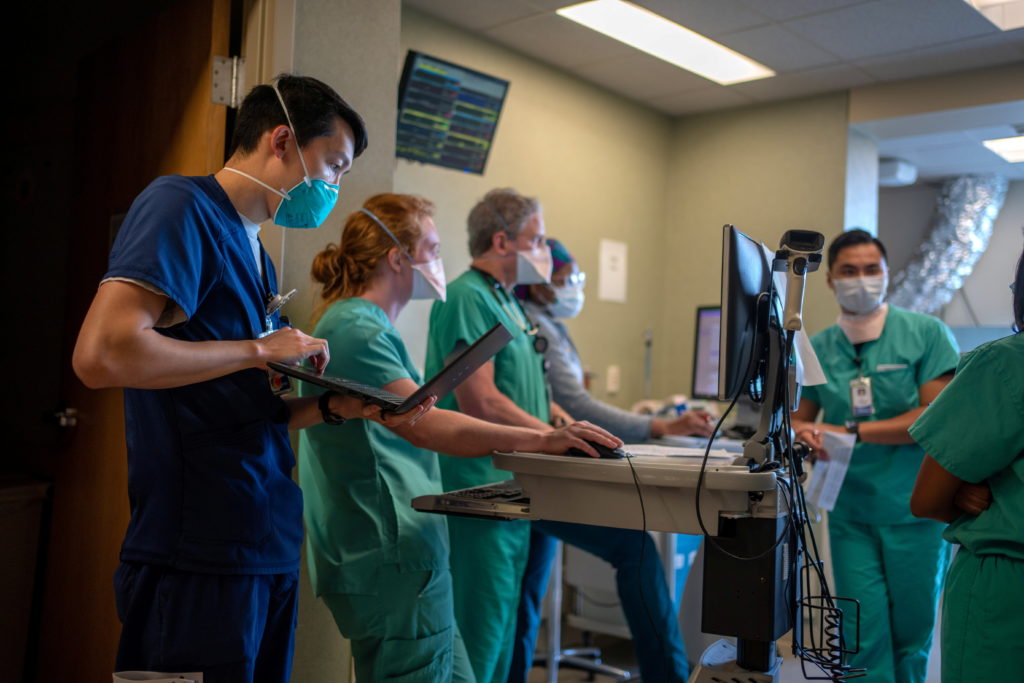 Eighty-three percent of current COVID hospitalizations in Louisiana are among people who are unvaccinated. Those not fully vaccinated accounted for 82 percent of cases and 71 percent of deaths from Nov. 18-24, according to the Louisiana Department of Health (LDH). Kanter says efforts to slow the numbers and increase vaccines have been hindered by misinformation.

After the hearing, Kanter blasted some of the testimony calling it “reckless” in a tweet saying, “Well-known and well-debunked national anti-vax activists descended on Louisiana today to intentionally spread vaccine disinformation.” Kanter also said, “no one will ever be forced to get a vaccine against their will.”

The Cruz family children participated in the Covid vaccine trials for children in New Orleans. Photo by Allison Cruz

Still, in a bipartisan vote, lawmakers overwhelmingly voted against the proposal with the support of three Democrats and an independent, even with a parent opt-out provision.

“This mandate leaves Louisiana in an embarrassing state. Taking the authority to decide on a child’s health away from the parents is not a requirement that LDH can make,” Republican State Senator Cameron Henry said.

Cruz, whose husband is a doctor, says adding this vaccine for schools and school children would be one more step to ending a 21-month nightmare for her and her kids.

“I think the vaccine requirement is definitely a step towards stability because I don’t think COVID is ever going to be over. Our kids will be dealing with this for a long time,” Cruz said. “Every human body that is not vaccinated becomes a variant factory and I don’t want kids to be a variant factory. I want them to be able to go to school and have a life. They deserve that.”

Left: Dr. Joseph Kanter, Louisiana State health officer, gets a shot with a child during a visit to Baton Rouge General. Photo by Louisiana Department of Health Staff

News Wrap: Pfizer says its vaccine is 91% effective at preventing COVID among kids 5-11