After about 15 hours of deliberation, a Dallas County jury found a former police officer guilty in the 2017 fatal shooting of 15-year-old Jordan Edwards.

Last year, a grand jury indicted former Balch Springs, Texas, officer Roy Oliver on a murder charge for killing the black teen after firing a rifle into a car that had left a house party in April 2017.

“It’s been a long time, hard year and we’re just really happy,” Jordan’s father, Odell Edwards, is quoted as saying by Fort Worth Star-Telegram after the verdict was announced. “We did it.” 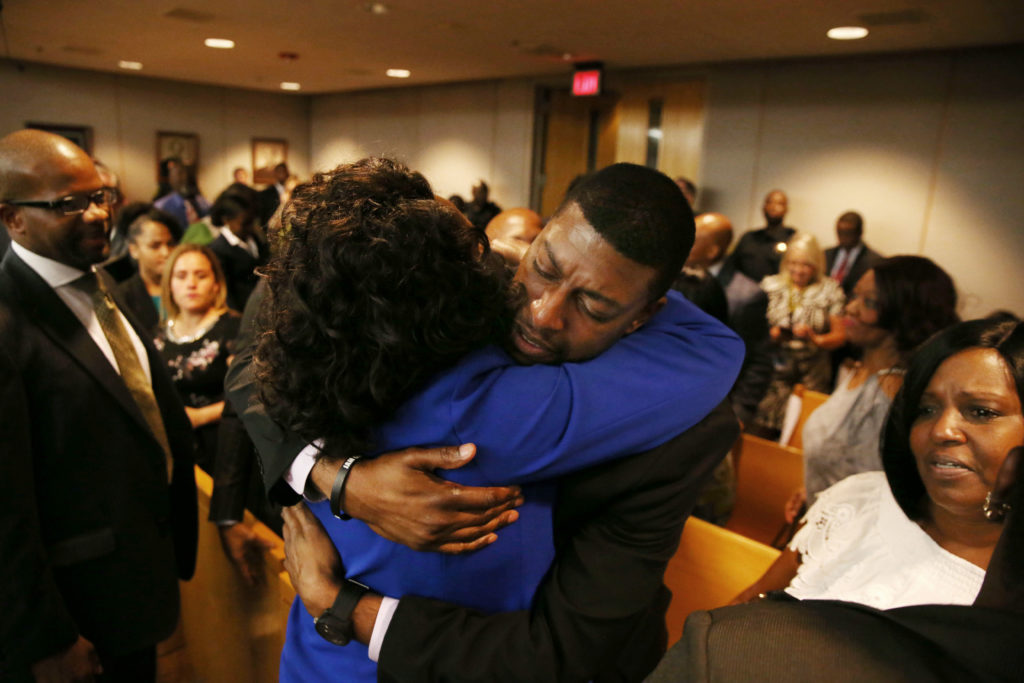 Odell Edwards and Charmaine Edwards, parents of Jordan Edwards, react to a guilty of murder verdict trial of fired Balch Springs police officer Roy Oliver, who was charged with the murder of 15-year-old Jordan Edwards. Photo by Rose Baca/Getty Images

Oliver shot five times into the car full of teenagers. Edwards, who was unarmed and sitting in the passenger seat, was struck in the back of the head. Shortly after, he was pronounced dead at a local hospital.

Oliver was also initially indicted on four additional counts of aggravated assault last year. Those four counts of aggaravated assault are for each of the other teens in the car at the time of the incident. Two of car’s occupants were Edwards’ brothers.

For the trial, overseen by Judge Brandon Birmingham, Oliver faced a murder charge and two of the four assault charges. The jury, however, did not find Oliver guilty for those two assault charges. Judge Birmingham read the jurors’ verdict Tuesday in the courtroom. The jury sentenced Oliver to 15 years in prison, a punishment the family called too lenient.

Oliver, who is white, had argued that the car posed a threat, believing that it was about to run over his partner, Tyler Gross. After the shooting, Balch Springs Police Chief Jonathan Haber supported Oliver’s claim, saying that the car had reversed toward the officer “in an aggressive manner.” However, available body camera footage disputed this.

Days later, authorities said a review of the body camera footage and interviews with witnesses showed that the car was actually moving away from the responding officers. Oliver was then fired from the department.

Oliver and his partner Tyler Gross responded to a report of an unruly house party and possible underage drinking on April 29, 2017. After arriving at the scene and entering the residence flagged by the report, they heard gunfire. Both officers ran outside the house. Oliver grabbed his rifle and soon followed Gross who was ordering a car to stop. That’s when Oliver decided to fire into the car.

Last week, Oliver testified that he intentionally shot into the vehicle because the car was “gaining ground” on his partner. Defense attorneys argued that Oliver was trying to protect his partner, while the ex-officer maintained that he was justified in shooting Edwards.

“I had to make a decision. This car is about to hit my partner. There are threats inside the car,” he said in court Thursday. “I had no other option but to use lethal force.”

Video by The Dallas Morning News

But his partner, Gross, testified that he didn’t fear for his life.

Authorities, too, would later determine that the gunfire the officers heard was not related to anyone in the car that was shot by Oliver, nor were any weapons found in the vehicle. The shots came from a nearby nursing home, police said.

Edward’s death came in the middle of a series of high-profile, deadly police encounters in recent years that have raised public awareness of police officer’s use of force against minorities. The family’s attorney directly tied the Edwards case to this issue, which has resulted in few convictions against officers.

“We’re just happy here in Dallas, Texas, that Roy Oliver is going to have to do his time for taking Jordan’s life,” Washington added.

Left: Fired Balch Springs police officer Roy Oliver, who is charged with the murder of 15-year-old Jordan Edwards, testifies with defense attorney Jim Lane during the sixth day of his trial at the Frank Crowley Courts Building in Dallas on Thursday, Aug. 23, 2018. Photo by Rose Baca-Pool/Getty Images

Why do so few deadly police shootings end in police convictions?