SANTA FE, Texas — Texas Lt. Gov. Dan Patrick called Sunday for a “hardening” of the nation’s school buildings in the wake of the attack by a 17-year-old student who killed 10 people at a high school near Houston.

Patrick, a Republican, blamed a “culture of violence” and said more needs to be done to keep shooters away from students, such as restricting school entrances and arming teachers.

“When you’re facing someone who’s an active shooter, the best way to take that shooter down is with a gun. But even better than that is four to five guns to one,” he told CNN’s “State of the Union.”

On ABC’s “The Week,” Patrick said he supports background checks for gun purchasers but stressed that “gun regulation starts at home.”

Elsewhere, the first funeral for a shooting victim was set for later Sunday. Services for 17-year-old Pakistani exchange student Sabika Sheikh were to take place at a mosque in suburban Houston.

Her father, Abdul Aziz Sheikh, described his daughter as a hard-working and accomplished student who aspired to work in civil service and hoped one day to join Pakistan’s foreign office. Her body is to be returned to her family in Karachi. 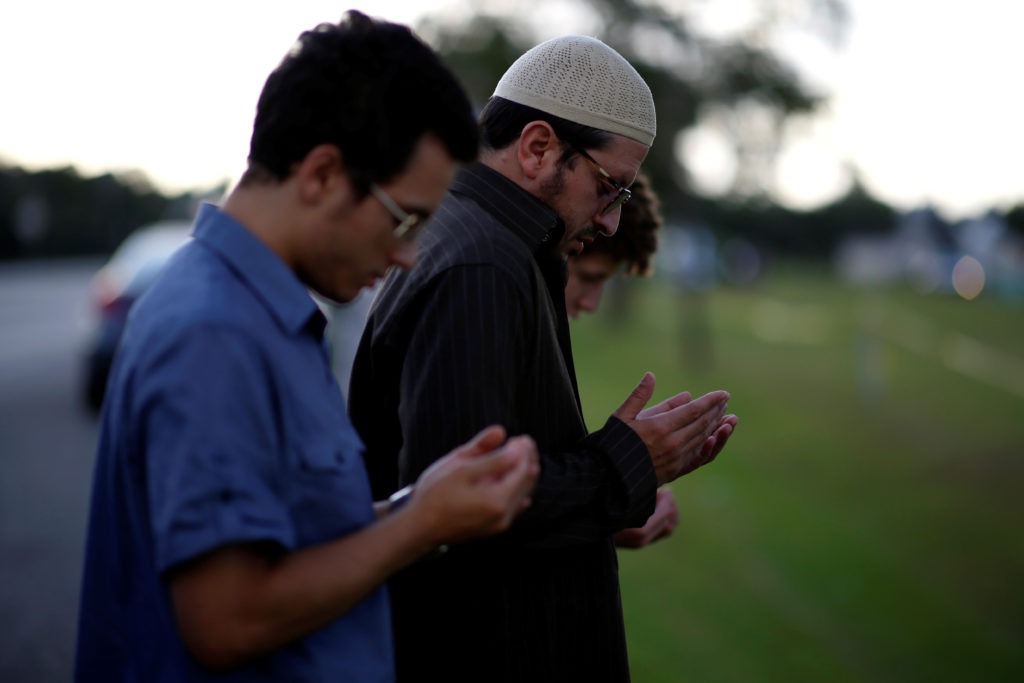 Daniel Hernandez, a local imam, prays with his two sons near the site of the shooting at the Santa Fe High School, in Santa Fe, Texas, U.S., May 19, 2018. Photo By Jonathan Bachman/Reuters

The suspect in Friday’s attack began by firing a shotgun through an art classroom door, shattering a glass pane and sending panicked students to the entryway to block him from getting inside, witnesses said.

Dmitrios Pagourtzis fired again through the wooden part of the door and fatally hit a student in the chest. He then lingered for about 30 minutes in a warren of four rooms, killing seven more students and two teachers before exchanging gunfire with police and surrendering, officials said.

Freshman Abel San Miguel saw his friend Chris Stone killed at the door. San Miguel was grazed on his left shoulder by another volley of shots. He and others survived by playing dead.

“We were on the ground, all piled up in random positions,” he said.

Galveston County Judge Mark Henry, the county’s chief administrator, said he did not think Friday’s attack was 30 minutes of constant shooting, and that assessment was consistent with other officials who said law enforcement contained the shooter quickly. But authorities did not release a detailed timeline to explain precisely how events unfolded.

Junior Breanna Quintanilla was in art class when she heard the shots and someone say, “If you all move, I’m going to shoot you all.”

Pagourtzis walked in, pointed at one person and declared, “I’m going to kill you.” Then he fired.

“He then said that if the rest of us moved, he was going to shoot us,” Quintanilla said.

When Quintanilla tried to run out a back door, she realized Pagourtzis was aiming at her. He fired in her direction.

“He missed me,” she said. “But it went ahead and ricocheted and hit me in my right leg.” She was treated at a hospital and spoke with a brown bandage wrapped around her wound.

“It was a very scary thing,” Quintanilla said. “I was worried that I wasn’t going to be able to make it back to my family.”

In their first statement since the massacre, Pagourtzis’ family said Saturday that the bloodshed “seems incompatible with the boy we love.”

“We are as shocked and confused as anyone else by these events,” said the statement, which offered prayers and condolences to the victims.

Relatives said they remained “mostly in the dark about the specifics” of the attack and shared “the public’s hunger for answers.”

Pagourtzis’ attorney, Nicholas Poehl, said he was investigating whether the suspect endured any “teacher-on-student” bullying after reading reports of his client being mistreated by football coaches.

In an online statement, the school district said it investigated the accusations and “confirmed that these reports were untrue.”

Poehl said that there was no history of mental health issues with his client, though there may be “some indications of family history.” He said it was too early to elaborate.

The mother of one slain student said her daughter may have been targeted because she rejected advances from Pagourtzi, who was an ex-boyfriend of her daughter’s best friend.

Sadie Rodriguez said her 16-year-old daughter, Shana Fisher, repeatedly told him no, and he “continued to get more aggressive.” The week before the shooting, Fisher “stood up to him” by embarrassing him in class, Rodriguez said.

In addition to a shotgun and a handgun, Pagourtzis also had several kinds of homemade explosive devices, but they were not capable of detonating, Henry said.

Investigators found a cluster of carbon dioxide canisters taped together, and a pressure cooker with an alarm clock and nails inside. But the canisters had no detonation device, and the pressure cooker had no explosive material, Henry said.

“They were intended to look like IEDs, but they were totally non-functional,” Henry said, referring to the improvised explosive devices common in the early years of the U.S.-led war in Iraq.

Authorities have offered no motive, but they said in a probable-cause affidavit that the suspect had admitted to carrying out the shooting.

The gunman told police that when he opened fire, he avoided shooting students he liked “so he could have his story told,” the affidavit said.

From first word of the shooting, at 7:32 a.m. Friday, until confirmation that the suspect was in custody, the attack lasted about half an hour.

Dispatch records indicate that law enforcement first entered the building about seven minutes after learning of the assault. The suspect was said to be in custody by shortly after 8 a.m.

Texas Gov. Greg Abbott said the assailant got the guns from his father, who owned them legally. But it was not clear whether the father knew his son had taken them or if the father could face prosecution.

Associated Press Writer Will Weissert in Austin contributed to this report.

Left: Police tape is seen near the site of the shooting at the Santa Fe High School in Santa Fe, Texas, U.S., May 20, 2018. Photo By Jonathan Bachman/Reuters