The Kentucky Derby has a secret Latino history

This Triple Crown season, which opened Saturday with the Kentucky Derby, horses with Latin American bloodlines are among the top favorites.

Two 2019 derby contenders – Vekoma and Game Winner – are half brothers and the offspring of Candy Ride, one of Argentina’s most famous thoroughbreds. Now retired, Candy Ride shares his winning genes freely – well, for a stud fee of US $80,000 – at Lane’s End Farm in Kentucky.

That two top Derby contenders have their roots in Latin America is no surprise for those who study, as I do, the history of the sport. Many past Kentucky Derby champions hailed from the region – as have their trainers, owners and jockeys.

Cañonero II and the 1971 Kentucky Derby

The 1971 Kentucky Derby belonged to Venezuela’s Cañonero II, although few predicted it.

Announcers regularly referred to Cañonero – a 3-year-old colt with a crooked right foreleg – as the “mystery horse.” In early May 1971, the odds of him winning were long: 500-1. Few in Louisville, the mecca of American horse racing, took the Venezuelan team seriously.

“They say we are clowns,” said Cañonero’s Caracas-based trainer, Juan Arias, as Derby Day approached. “They say we are Indians because my horse gallops slowly, sometimes without a saddle.”

The trip from Caracas to Kentucky was a harrowing one. Cañonero flew to Miami a week before the Derby, where he waited for 12 hours on the plane in the Florida heat while his paperwork cleared. Then he was quarantined for four days before traveling by trailer to Louisville.

The 1,000-pound Cañonero II dropped 70 pounds in the process, but Arias wasn’t worried.

“Just relax, go eat, and we’ll wait for tomorrow,” Arias would say if Cañonero was not eager to train. Within a week, the horse had gained back his confidence – and 50 of his 70 lost pounds.

On Derby Day, a lanky Cañonero II and jockey Gustavo Avila overtook 19 horses to win by three-and-three-quarters lengths, just ahead of his American competitor Jim French – a 3-year-old so rigorously trained, many thought him indefatigable.

Nobody could believe it – except the Venezuelan team who had nurtured Cañonero from a scrawny, worm-infected colt to a global phenomenon.

Historically, the vast majority of professional jockeys have come from Latin America – trained in the jockey schools which opened in the 1950s and 1960s in Panama, Puerto Rico and Mexico City.

“Most American trainers train for speed,” explained Arias, in Spanish, prior to the 1971 Derby. “I train Cañonero to be a star.”

Arias, Cañonero’s owner Pedro Baptista and groom Juan Quintero then set their sights on the Preakness, the second race of the Triple Crown. Cañonero won there, too, breaking a speed record set in 1955.

Cañonero and his team, now immensely popular, turned to the Belmont Stakes, in Elmont, New York – the final race of the Triple Crown. But fatigue and a bacterial infection in his hoof had weakened Cañonero. He finished fifth.

Though he didn’t win the Triple Crown, Cañonero’s dramatic victories and underdog story brought about a resurgence of interest in the sport of horse racing, according to equine journalist Steve Haskin. Attendance for the 1971 Belmont Stakes surged to 82,694, far surpassing the previous year’s record turnout of 67,961.

Among Cañonero’s fans were many Latinos, drawn to Elmont by the prospect of seeing a Venezuelan team win this quintessentially American race. 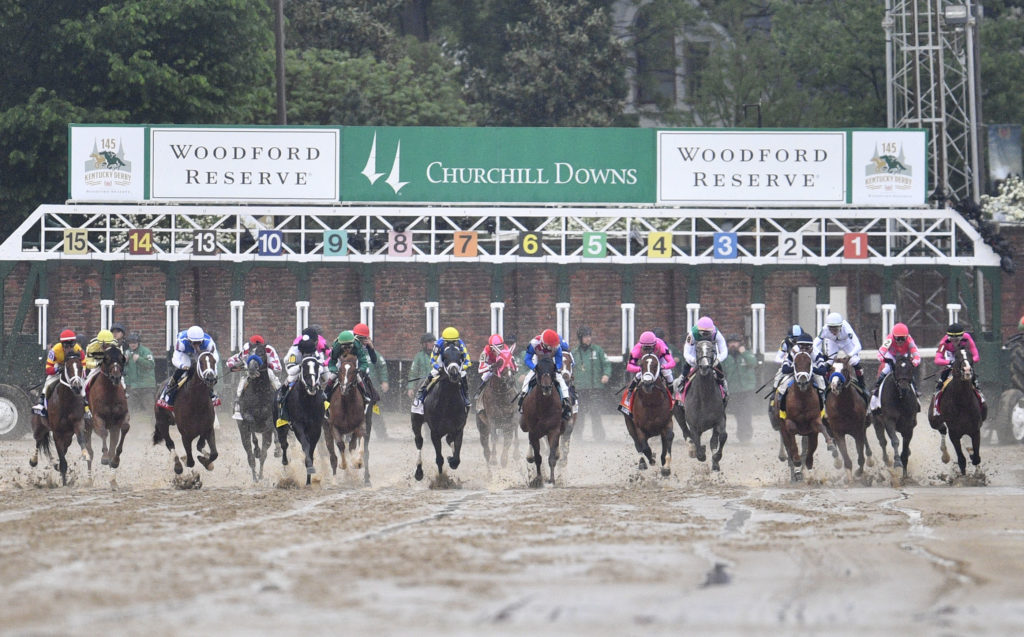 The field of horses race at the start during the 145th running of the Kentucky Derby at Churchill Downs on May 4. Photo By Jamie Rhodes/USA TODAY Sports

Cañonero’s wins were a symbol of pride for Latinos and the Latin American horse racing community.

Historically, the vast majority of professional jockeys have come from Latin America – trained in the jockey schools which opened in the 1950s and 1960s in Panama, Puerto Rico and Mexico City. In the 2015 Kentucky Derby, 61% of the jockeys were Latino.

In contrast, relatively few horses who compete in the U.S. were trained abroad.

Cañonero II earned his place at the Derby training against stiff competition at La Rinconada racetrack in Venezuela. His trainer, Arias, grew up poor in Caracas and fell in love with horses. There, he forged his own style of raising and communicating with horses that was different from the more regimented style of the United States.

“I can learn from American trainers,” Arias told Vault magazine after Cañonero won the Preakness. “But I can also teach them some things.”

Latin America has a long tradition of professional equestrianism.

The day after the Kentucky Derby, Puerto Rico holds the Puerto Rican Derby, run at the Camarero racetrack in Canóvanas. Each December, nine Latin American countries aim to compete in the Caribbean Derby, a premier race founded in 1966.

Just four jockeys have won both the Kentucky Derby and the Caribbean Derby. One of them is Gustavo Avila, Cañonero’s jockey.

Bold Forbes and the 1976 Kentucky Derby

In 1976 another Latin American star – the Cuban-trained and Puerto Rican-owned Bold Forbes won the Kentucky Derby and another Triple Crown race, the Belmont Stakes.

Like Cañonero II, Bold Forbes was an unlikely champion. During a dinner for trainers prior to the derby, The New York Times reported in 1976, an “undiplomatic questioner” insulted the black horse for his small stature – just 15.2 hands high – saying he looked like a filly.

“When you put a saddle on him, he kinda grows,” said Larry Barrera, the son of Bold Forbes’ Cuban trainer, Laz Barrera.

Barrera’s confidence was rightly placed. Bold Forbes ran the first half of the Kentucky Derby faster than any past Derby winner. His photo finish victory against favorite Honest Pleasure had the crowd of 115,000 roaring.

Throughout the week leading up to the Derby, Latinos went to visit Bold Forbes at the barn in Churchill Downs.

“Latins feel deeply for this horse,” Barrera told Vault magazine. “He is little … but when Cordero is on him he looks like the biggest horse in the world to Latin people.”

Bold Forbes was the first horse to win big for Barrera, but not his last. The Cuban trainer went on to win countless races, including, in 1978, all three legs of the Triple Crown. He is the only trainer nominated to the Racing Hall of Fame in Cuba, Mexico and the United States.

Barrera saw the victories of Bold Forbes as a triumph for Latinos.

With the favorite, owner Rick Porter’s Omaha Beach, suddenly out of the race due to illness, experts and fans were backing Game Winner, the offspring of that venerable Argentinean runner Candy Ride, with 4-1 odds.

Candy Ride’s other offspring in the race, Vekoma, had worse odds: 15-1.

But Derby history shows that talented horses can defy expectations.

“This horse is so special that even if he didn’t love the distance, he could still win,” Vekoma’s trainer, George Weaver, told Blood Horse Magazine on April 13.

“Good horses … do what they’re not supposed to do. And this is a really smart horse who will give everything he’s got.”

E. Gabrielle Kuenzli is an associate professor in the history department at the University of South Carolina. This article was originally published on The Conversation. Read the original article.

Left: Javier Castellano aboard Vekoma (6) and Tyler Gaffalione aboard War of Will (1) race during the 145th running of the Kentucky Derby on May 4 at Churchill Downs. Photo By Brian Spurlock/USA TODAY Sports