This small Pennsylvania region produces half the mushroom crop in the U.S.

In a small section of Pennsylvania, indoor farms are producing more than a million pounds of mushrooms every day.

Farmers in Chester County, Pennsylvania, have been producing mushrooms since the late 1800s, when several local Quakers decided to grow them in the space underneath their flowerbeds, NPR reported in 2012, citing local lore.

Today, the industry generates hundreds of millions of dollars in sales each year for Chester County, which has also held a yearly mushroom festival for more than 30 years. The area’s commercial mushroom farms grow them indoors, which allows them to carefully control the environment and maximize production.

Recently, indoor farming — a model that commercial mushroom producers have used for decades — has drawn more attention as an approach to sustainable food production. Michael Guttman, director of the sustainable development office for Kennett Township, Pennsylvania, spoke with the PBS NewsHour Weekend about the area’s mushroom heritage and the lessons that mushroom production offers for other farmers.

Tell me about Kennett Township. How many people live and work here, and what do they produce?

Kennett Township is one of several municipalities in the immediate area that’s in the mushroom industry. We have about 9,000 people. Kennett Square, which is closely aligned with us, has about another 6,000.

We’re the largest producer in the world of fresh mushrooms. And we not only produce but pack and ship all across North America, with delivery typically within 48 hours. That’s about a half a billion pounds of mushrooms a year. And that represents about 50 percent of the U.S. mushroom crop.

So is all of that produce grown indoors?

All mushrooms grown commercially are grown indoors. It’s not possible to produce mushrooms in commercial quantities without completely controlling the environment.

How has indoor mushroom farming changed over the years? Has there been any advancements in technology that have impacted the way you grow?

Of course. So in the beginning, it wasn’t possible to grow mushrooms in the summer, because it was too hot. Mushrooms generate a lot of heat. And so if you’re growing them indoors, you have to keep them cool. So — advancements — first, it was cooled with ice. And then of course refrigeration came in. So that was a major change.

Another, probably more fundamental change was that originally, mushrooms were grown and canned. And there were some canning operations that continued until even into the 21st century. But by and large, we switched over to fresh mushrooms probably by the 1970s or ’80s. Because the canned mushroom market became very competitive. You can can mushrooms anywhere in the world and distribute them. But if you want to deliver them fresh to the U.S. market, you have to deliver them immediately, and obviously quickly.

What are you doing to attract new farming ventures to Kennett Township?

We already control about 50 percent of the production in the United States, and another 15 percent are nearby. So there’s not a lot of growth in that market for us. We’re the top producer in part because we have the lowest cost. But there’s a limit to how much more of the market we can take that way.

So it’s very attractive to us to consider bringing in other crops. But until recently, that just wasn’t economically feasible. So the new developments in what we call green indoor agriculture, mainly new forms of lighting, new forms of computer control, and irrigation and so forth — those make it possible now to grow competitive green products. And that would be very interesting to us, because they would use much of the same infrastructure that we have.

How is that a benefit to an incoming producer?

Well, one of the problems that people have in the green indoor agriculture industry today is reaching the levels of production that allow them to have the price point to be competitive with field-grown crops from areas like California, Mexico, Chile, etc.

In order to get to those costs, they have to ramp their production up to a level where their next problem is distribution. So if they come into a community like us, we can solve two classes of problems for them. One is, when they come to construct their facilities, we know that game and we play that very well. So our utilities understand it. Our rules and regulations are organized around that. And we have services here to help construct those facilities.

But particularly when they wanna distribute, we’re already distributing to exactly the same market, the same produce market, that they wanna get into. We’ve been doing it for a hundred years, and certainly in the fresh market for the last 50 or 60. We have all of those relationships, and we have all the facilities to handle that produce and get it to market within 48 hours. 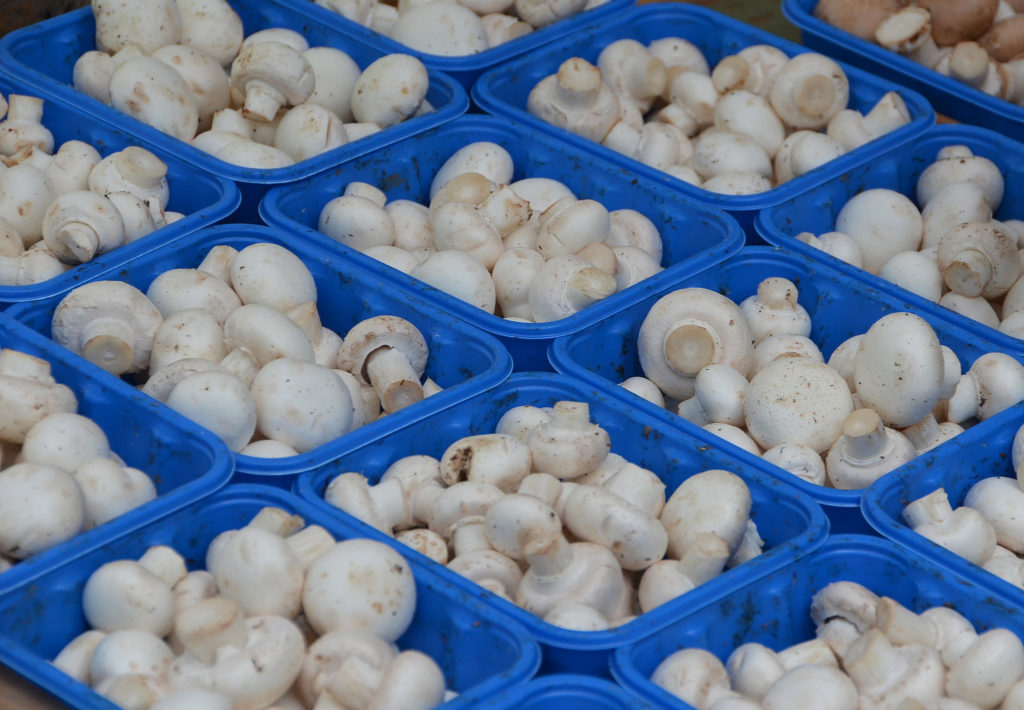 Chester County in Pennsylvania controls about 50 percent of the country’s mushroom production. The Photo by Flickr user Adam Fagan.

What do you see as some of the challenges facing indoor growers that newcomers to the field might not be aware of?

I think that the biggest emphasis in green indoor agriculture as it’s developed over the last decade or so has been coming up with economical growing techniques to reach the price point where they can compete with field crops. So for the last decade or so, the green indoor agriculture industry has been working on developing efficient techniques of growing that can compete with field crops. But they haven’t given a lot of thought to what happens when they actually produce those things in quantities.

So I think their biggest challenge is to be able to both produce in large quantities and get that distributed. So several companies I’ve talked to have actually cancelled projects because they couldn’t figure out if they grew that much, how they would distribute it.

Are there any newer innovations that have changed the way indoor mushroom farming looks like here in Kennett?

There’s a lot of technology, most of it developed in Europe, to better automate or semi-automate production. So here in Kennett, because we have such a long history, we’ve been building facilities. For example, we build the frames for the vertical farms with wood. That’s the classic way to do it, and it’s still done that way and it’s still economically feasible to do it. But the newer facilities, they now employ aluminum shelving that has tracks, so that you can run different types of equipment up and down. And that makes a big difference.

The other of course is computer-controlled climate. So these systems are just getting more and more sophisticated. And not only do they do a good job of controlling the environment, but they collect a lot of data that can be used for analysis. One of the things that we’re interested in in the longer term is how that could become big data, where we could analyze — at a much larger scale — the impact of anything from climates to nutrients to agricultural pests, whatever, based on a larger base of of data.

Left: A small Pennsylvania region is the largest producer in the world of fresh mushrooms. Photo by Flickr user Chris Goldberg