Cain and the Louisiana Cajun Navy, a volunteer-based “militia” that travels with their personal vehicles, boats and equipment to assist rescue efforts during times of disaster, have been getting ready to go into areas of the Florida Panhandle destroyed by Hurricane Michael. The chainsaws will help chop away debris to free those trapped by storm damage.

He and his volunteers have ransacked every Lowe’s hardware store in Mobile, Alabama, looking for saws, gas cans and other supplies sold out in Florida. “That storm came so fast. Everything’s wiped out,” Cain, 55, said. “It looks like a bomb hit.”

Hurricane Michael pummeled the Florida coast Wednesday as a Category 4 storm with sustained winds of 155 miles per hour — the strongest anywhere on the U.S. mainland in nearly 50 years. Beach towns like Panama City were wiped out as the hurricane ripped inland, bringing with it massive waves, downed trees and blasts of rain.

Cain shook hands with officials from the Department of Homeland Security earlier this week, forging a partnership with the department to perform rescues alongside federal efforts. Cain’s team, however, avoids areas already already receiving aid.

As of Thursday, fallen trees had killed at least two people in the region, and the storm is not over yet. Now downgraded to a tropical storm, Michael is continuing to bring heavy rains and blustery winds to the Southeast, and there’s fear that spinoff tornadoes may form in Florida and Georgia.

Why Hurricane Michael took everyone by surprise and what to expect after it’s gone
By Nsikan Akpan, Julia Griffin

Meanwhile, more than 780,000 Florida homes and businesses have been left without power. Even if residents could charge their phones, there’s no cellphone service.

The first wave of Cain’s disaster relief mainly involves rescuing those who wouldn’t evacuate, or who couldn’t, like the elderly, the sick or people with disabilities. Yesterday, his early response teams — in personal trucks, jet skis, school buses and hummers — rescued at least 22 people, he said.

Cain has fielded several worried calls from friends, family and Cajun Navy volunteers who haven’t been able to reach anyone in Florida. “We can’t communicate. Everyone’s just freaking out,” Cain said. But he’s got a plan.

He has seven trailers ready to deploy in the Florida area, and three on standby to respond as the storm moves toward Georgia and the Carolinas. Before the storm hit, he sent an 18-wheeler out with supplies. His animal-rescue team is canvassing neighborhoods in a school bus that’s on the lookout for trapped pets and livestock. Cain has roughly 15 people leading rescue teams. Back at the Cajun Navy headquarters in Louisiana, more are processing volunteer applications at a rapid rate.

Cain launched the Louisiana Cajun Navy, entirely funded by volunteers, after riding out Hurricane Katrina with his church in 2006. Cain’s 18-year-old son had died four months earlier. In his grief, he reached out to help others. “I just took care of people,” Cain said. “I set up barbecue bits, I ran shelters — I even brought them Santa Claus.” 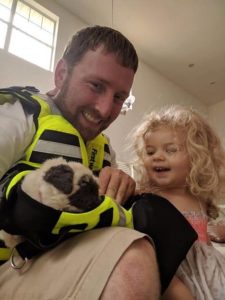 In his 14 years of hurricane relief efforts, he always prioritizes low-income and impoverished areas. His rationale is that homeowner’s and flood insurance checks go to landlords and property owners, not to those renters who are living in federally subsidized housing or trailer homes.

“The outer areas get isolated,” Cain explained. In his experience, neighborhoods at or below the poverty line are often devastated, but ignored by rescue forces. That’s where he goes first.

Cain deployed to Florida this morning with his crew, his gear and his dog after approximately an hour and a half of sleep. He has been ready to respond to Hurricane Michael for three days, but he said nerves kept him up, despite having done this for more than a decade.

On Facebook and Twitter, the Cajun Navy posts liveshots of storm damage and areas to avoid, as well as updates from federal, state and local authorities. Cain has instructed his volunteers and rescue workers to prepare for the second wave of disaster response: relief for communities crippled by tragedy and rebuilding what was lost.

“After finding people dead and rescuing addicts … some of the things I’ve seen — I’m not going to say I’m numb to it. It’s all just part of the ‘war,’” Cain said. “But the most fulfilling thing for me is to help people and bring a smile to their faces.”